A good instructional for the basics: the B12.

Brian Johnson is a Machado blackbelt in Seattle (under David Meyer and John Will) training at the Northwest Jiu Jitsu Academy.  About a year ago, he put together a solid 3-DVD instructional series covering the "B12" or the basic 12 foundational lessons beginner grapplers need to know.  It's $100, available on Amazon, and worth it for whites and new blues. 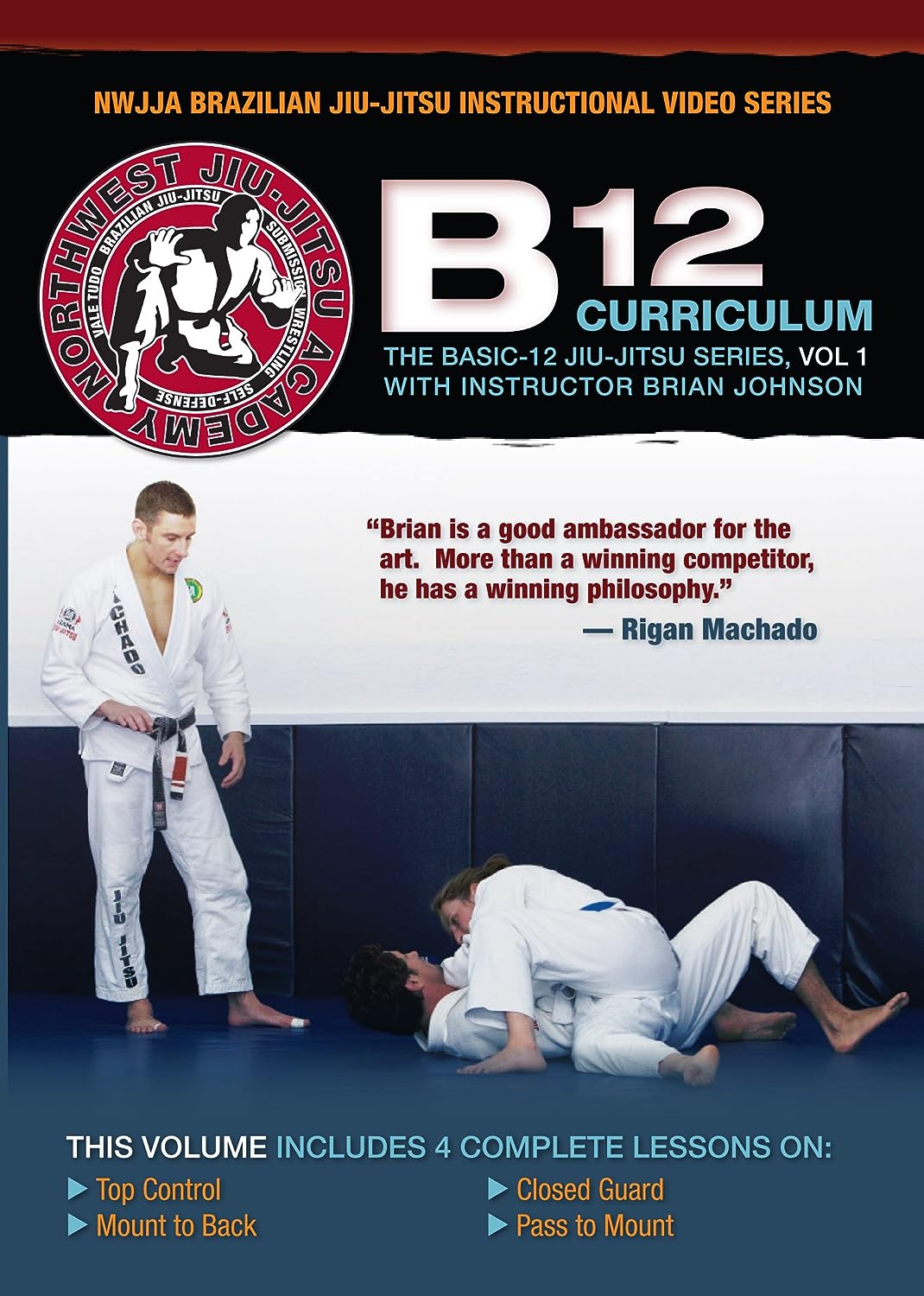 DSTRYR-SG also reviewed this, here.
I actually prepared this review in May 2012.  Unfortunately, for whatever reason, I didn't post it-- I think I was having issues with making video clips.  Aaannnd, then life got away from me and I misplaced my notes aaaannnnd... look, it's almost a year later.  But I found the notes and here we go-- absent video clips, since I'm in California right now, without my harddrive, thus no B12 at the mo'.

Overall, it's a well-made, nice basic curriculum.  I don't think there are many instructionals like it on the market; maybe the White to Blue material from Roy Dean.  I'd say this series is designed for students without an academy (military members overseas, people in rural areas, people in between academies etc), people looking to practice at home who need visual reminders, AND beginning teachers looking for some guidance or role modeling on teaching.

It was professionally produced with a nondistracting background, the demonstrators usually wear different colored gis which makes it easier to see who is doing what, the audio is clear, and the techniques are shot several times with good alternate angles. At the end of each technique, a group of students drills the material (such a nice touch, something I never see in other DVDs.  I can imagine it would be SUPER helpful if you and a partner were watching the DVD together with some mats-- you wouldn't have to pause to drill, you could drill and watch and listen at the same time.)  I liked that there were female students in the mix, too.  And at the end of the disc, you'll see a little warmup footage (I think maybe better at the start?) and some competition footage of Brian's.

The techniques taught include:


There are a couple little picky points-- a typo in the scripted intro ("and and"). The introductory speech from Brian and Rigan is repeated on volume 2. Sometimes they change locations for filming and the mats go from blue to red. The ladies are always drilling with each other.  More concerning, I did not like how the armbar from top was demonstrated because his knee allows so much space behind the tricep and swinging the leg around isn't the optimum in control.  Aside from that the techniques were good (and who am I to critique a blackbelt; there are many right ways to do things!)  I wish they would have had different warmups for each disc (helpful for beginning instructors) and that they would have put them at the beginning, not the end.

But I loved seeing the competition footage.  I hope Brian gets better camera-holders at future tournaments because some crucial moments were lost due to operator error, yet it was very exciting to watch and I can imagine it is very motivational for a beginning grappler.

Brian is coming out with a new instructional called The Entangled Arm, basically an overhook guard game for gi and nogi.  They're in post-production now and I'll be updating this with links when I get them!

Ooo, I like the sound of an overhook guard series: I'm keen to get better at that side of things, once this damn injury finally heals up. :)