Rener Gracie +
114 jiu jitsu students +
eight hours +
a giant high school wrestling room in Bellevue WA (just outside Seattle)
=
almost too much of a good thing. But really, there's no such thing as too much jiu jitsu, right?

Rener's super seminar was amazing. I'd done a Rener seminar before, a few years ago when I was still a pretty new blue, but that was just three hours on the back mount.  This was four seminars compressed into one solid day.

Rener and his wife Eve (expecting their first baby in about three months!) came to Seattle so Rener could teach the Gracie Survival Tactics course to law enforcement this week.  The lead organizer is my good friend Craig, a Bellevue police officer. Craig runs a Gracie Garage in his garage, and trains all over Seattle at most of the jiu jitsu academies.  He is a blue belt through the brothers and visits Torrance several times a year to train directly with them. This personal connection is certainly part of why Rener agreed to teach this super-seminar in the Pacific northwest, and we were the happy beneficiaries. 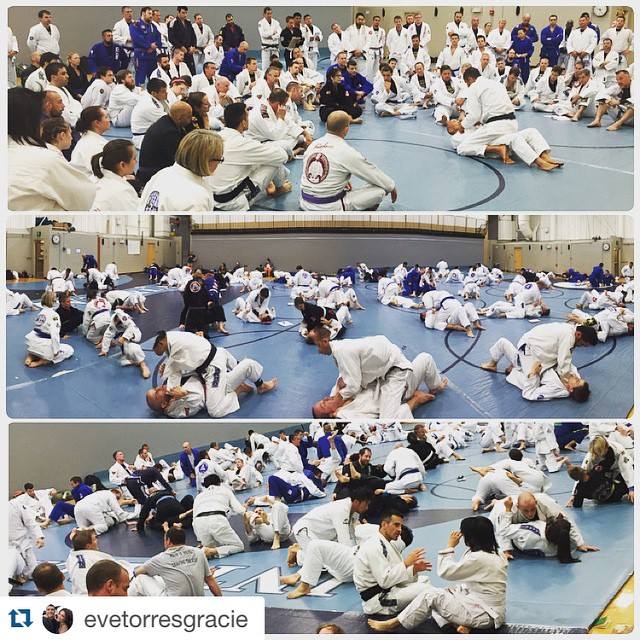 The schedule called the first two hours "Cross Chokes" but that didn't do it justice.  Try jiu jitsu pedagogy including how to be a good training partner, how to get the most out of a jiu jitsu seminar,  how to design effective drills, and how to teach a complex concept in "slices" or smaller, more digestible chunks. Then add mount maintenance, mount escapes, grip strategy, cross collar and pile grip chokes, injury prevention, S-mount, and armlocks from mount. That's just your first two hours.

The next seminar segments were similarly under-titled as Guillotines, Submission Counters, and Street Self Defense. All in all, eight hours of instruction, with half-hour breaks between each and a two hour lunch. The breaks were much needed, and my brain felt very full by the end of the day.

Rener is a talented and skilled instructor. He'll gather the group into a half-moon shape and demonstrate from a few angles. He'll take questions. He's VERY practiced as an educator, so he is adept at reaching all audience members no matter their learning style-- Aural/Spoken, Visual, and Kinesthetic/Gotta Feel it people.  You'll hear him use unique and memorable phrasing that help you recall essentials and details.  "If you own the chin, you own the choke!" "Grab the brother!" "Rattlesnake shot" and so on... 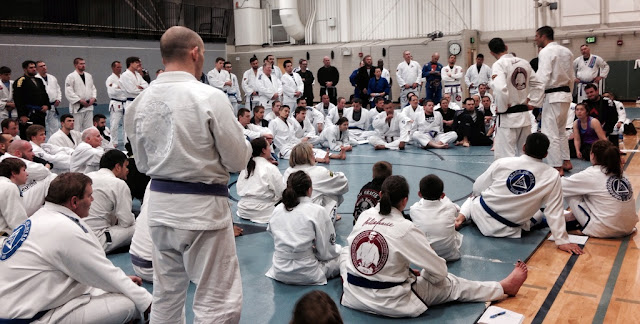 (You can thank Craig for that nice group shot and these other pictures below.)

Somehow the man also can get personal hands-on time with nearly sixty pairs of drilling partners without making anyone feel hurried, answering questions and giving one-on-one instruction. Here I am, with Rener choking my drilling partner and fellow purple belt Tyy Withrow. (and yes, I forgot my belt. Dammit.) 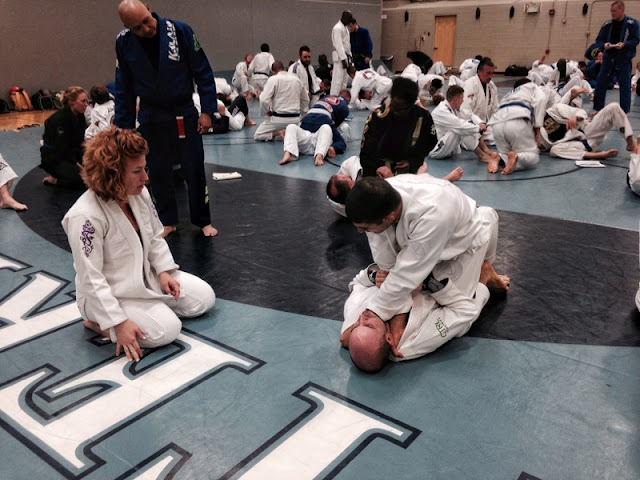 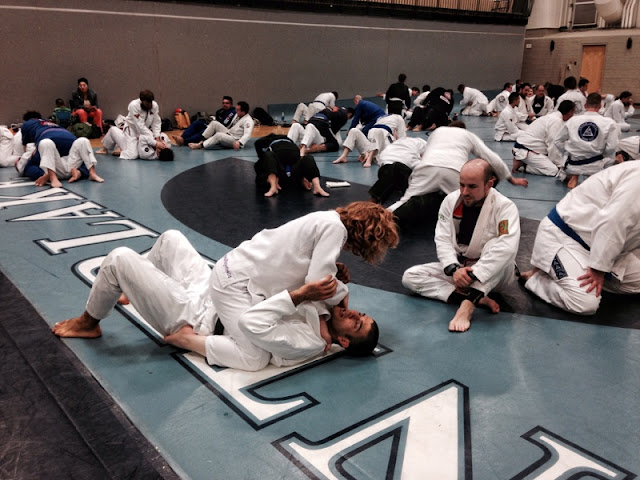 The crowd was stacked with upper belts. People from Canada, Hawaii, Colorado, Oregon, and California mixed with Washingtonians, and many different academies were represented. It's a great location for a seminar, too, with ample room to do the techniques. Even several varieties of guillotine escapes and escape counters that involved flipping around on one axis or another, up down and all around without knocking into each other. The only downside was it did get a little warm up there after lunch, although building staff brought in some commercial power fans and got the air circulating again comfortably.  There's plenty of free parking nearby, mens' and womens' locker rooms with showers handy, and it's convenient to quite a few food choices. (We went for sushi with Rener.)

I felt so dumb about forgetting my belt that I didn't get a picture with Rener.  Fortunately Tyy did.  And Tyy is bigger than me :) Rener is TALL!!! 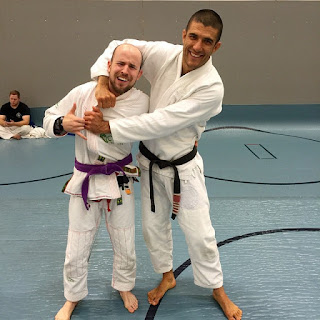 Rener is a very good instructor. Anyone who's ever taken a Rener seminar knows that the man can pack tons of insightful detail into every sentence. Trust me, bring a legal pad or notebook FULL of blank pages and two pens in case one runs out. You'll leave with enough information to fuel your drilling and strategizing for months.

I have nothing but respect for him. Can't recommend these super seminars highly enough. The Gracie Academy website has a partial list of upcoming seminars which you can check out here. Do it!