I wish Brazilian jiu jitsu wasn't being used the way it is.

Sexualization of women in jiu jitsu is nothing new... it's been covered pretty thoroughly.

Julia Johansen, who writes the Jiu Jiu BJJ blog, addressed Tukano Kimonos' use of naked women in body paint to advertise their company here. She also discussed the sexy photos of Kyra Gracie in just a gi top.

I agree with her perspective. I tend to think it's great to celebrate a healthy body image, to revel in being fit and attractive, to put yourself out there.  BUT I also get really creeped out by the kinds of comments that are made.. I don't like thinking of my training partners saying or thinking things like .. well, we all know the things that are said and thought.

So I tried to stay out of (and not click on) recent articles about a photo shoot done by BJJPIX, William Burkhardt.  He shot a sexy series of a female purple belt from California in various stages of undress from her gi. 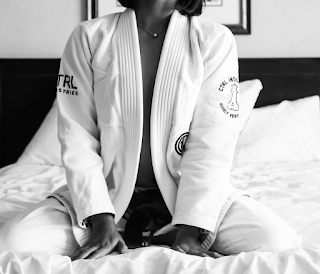 I wouldn't have pursued it any farther, except a friend recently shared with me some other work of William's that I found startling, weird, disturbing, and creepy.

He shot a promo video "documentary" for a BJJ blackbelt who is also one of those PUA's (pick up artists).

Arash Dibazar runs a women-only fitness studio in San Jose, CA called IMC Academy. That's him on the left. He says he is the only Persian black belt in BJJ, instructed by Sandro "Batata" Santiago, who is under Gordo.  It appears he was promoted in 2012. 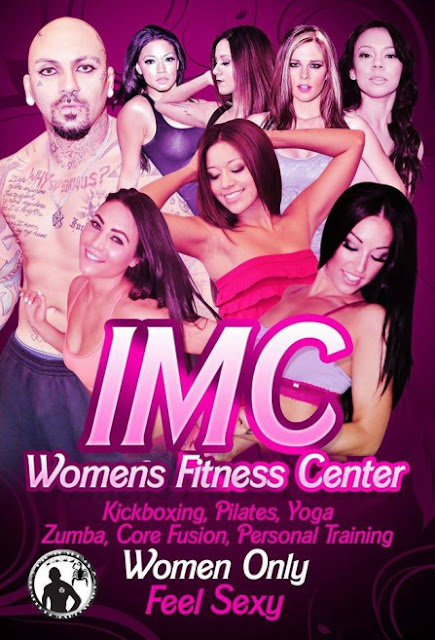 He also runs a "Survival and Fight" center, apparently only for men, in San Jose. 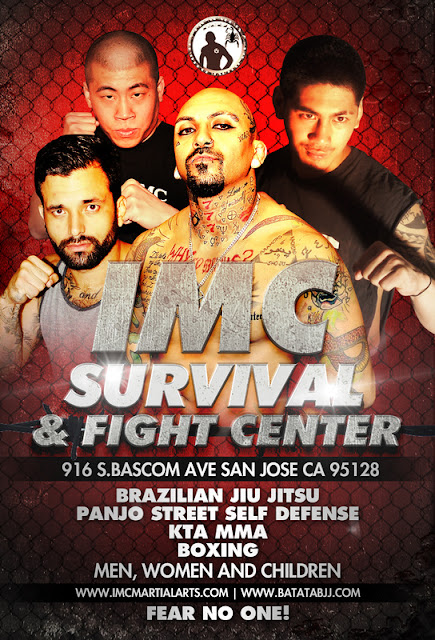 If you can't make it to the academy to learn "Panjo," the Persian street self-defense system he invented, you can order online lessons.

Here's the "documentary" Burkhardt shot of Dibazar's bizarre ramblings... NSFW.  In it, Burkhardt proclaims that Dibazar was the "2013 and 2014 #1 pickup and seduction artist in the world."  How is that kind of thing ranked?

I tried to look up something about Panjo, but for four pages on google, it's just stuff about exotic cars or a tiger that was lost and later found.  "Panjo martial arts" pulls up only Dibazar.

Here's the thread on Bullshido which covers negative yelp reviews about Dibazar hitting on his female clientele. Later, Dibazar renamed his business and got the negative reviews removed-- but they're immortalized on the Bullshido thread.  On the IMC Women's Fitness yelp, read the second review:

"This place was terrible. Arash makes uncomfortable remarks towards girls. The trainers ripped me off on countless occasions. Read through the filtered reviews to understand what this business really is. They created a second yelp account to hide the crappy reviews. Do not work out here unless you feel like being harassed. I regret ever coming here."

His response: "Imc Women's Fitness Center Inc. is a company built from an ethical nature. Owner, staff and students are welcome to participate in all IMC Academy events, classes, meetings and any other affiliation in regard to current standard membership if and only if the individual has proper exchange, is mentally stable, doesn't participate in drug use (psychiatric or recreational), expresses healthy emotions, has acute social skills and an ambitious drive to honestly improve themselves all the way from their inner beliefs transferred into their physical appearance, and most importantly, overall carries a positive attitude.

Any member who chooses to demonstrate unsatisfactory ethics, malicious behavior, and an erroneous attitude is not permitted to stay a member at IMC Women's Fitness Center. The environment is packed with women who are passionately dedicated to achieve their personal bests' in fitness and their lifestyles everyday! The energy is vibrant, the smiles are permanent and the instructors and employees understand that it is crucial to keep the environment as such. You can see that somebody with ill intentions would not stay in an environment listed above. To proclaim such slanderous banter towards individuals, who dedicate their entire lives to bettering the community, is a direct representation of the erratic bi polar behavior displayed by Heather. Each instructor spent many hours working with Ms. Heather, unfortunately her volatile, criminal behavior overtook her membership with IMC.  Ms. Heather has exhibited bi polar behavior and spasmodic communication through her invalid, desperate attacks on the owner and staff at IMC Women's Fitness Center. She has requested reviewers from a former irrelevant yelp page where the business is currently closed to spread devious reviews attacking the owner and current staff on false pretenses that have nothing to do with the current business and business operational standards of IMC Women's Fitness Center. She has posted private photos on a public forum with volatile intentions. IMC Women's Fitness Center Owner and Staff are currently in due process to serve Ms. Heather with a civil harassment restraining order. A cease and desist letter was directly sent to Ms. Heather no longer than six months ago to interrupt her slanderous, libel and defamatory behavior. The legal action is taken to ensure the safety of the staff and current members.

Do not reference Ms. Heather  reviews as a valid opinion. This review is not a direct representation of the Owner, Instructors, or daily business operations or regulatory standards of IMC Women's Fitness Center; it is a slanderous spew of unsatisfactory words spoken from an individual who holds herself at the lowest of regard. (Entrusted to her criminal record, bipolar behavior and heinous personal ethics"

Her response: "**In regards to the incredibly inappropriate comment added to my post by "management" trying to make me seem like a bad person does not and will not change the fact that my post is full of straightforward truthful facts. It's quite sad they had to make a new Yelp page to hide the negative reviews posted here. . Also, to be clear.. I left IMC on my own and was not "kicked out" or "removed" The IMC trainers ripped me off beyond belief, I have no "real" criminal history unless you'd include tickets haha.. nor do I have any "mental issues". Posting such lies was a really juvenile thing to do. I clearly stated there was a time I enjoyed working out here but that doesn't change the fact that things got really crappy after some time. I came to work out not be insulted, criticized, cheated, lied to and made uncomfortable on a daily basis."

There are quite a few glowing yelps, and yet... the negative ones, which allege sexual remarks and hitting on young teen women, ring more true.

Apparently he invested in a Scientology course.  Another thread about Dibazar on MartialArtsPlanet with some hilarious old video. Here's a portion of Dibazar's bio about his pickup skills, which I pulled from here:

"Having the confidence of a champion martial artist, the skills of an expert actor, and a deep background in Zen Buddhism and body language, Arash had a chance encounter with the book the "Game" that started him on the path to meeting Mystery from the Venusian Arts and devoting his energies and creativity to mastering the art of the pickup. A personal student of the Master Pickup Artist James Matador, Arash brings to the game a unique vibe that is extremely impressive and enjoyable to watch. A teacher for more than 18 years, Arash has a keen instinct for amplifying an individual's inner game and removing quickly the mental barriers that prevent men from succeeding in any field. This, coupled with his extensive understanding of the game, makes for one of the most potent instructors in the world of pickup today.""
Here's his pickup artistry website: http://www.seductiveinstinct.com/arash-dibazar.html
More silliness: Watch "[BJJ Highlights] Arash Dibazar - Fear No One" on YouTube - https://youtu.be/nRXYL3vXm44
And he has a Gracie Academy logo tattooed on his cheek.
I'm rambling, I guess, but I just want to know... why does a very talented BJJ photographer not see a problem with popularizing this tacky guy? I'm told he did the documentary for free.  Why? Dibazar doesn't even know how to pronounce Rafael Mendes' name right... he lets a dog run all over his jiu jitsu academy mats... he has a horrible attitude towards women.  Ugh.

what a fucking creep. plus, the only real bjj video of him is a promotional video of him and a blue belt (his student, most likely), that he labeled "bjj highlight."


as a man, i dislike the sexualization of female bjj athletes and MMA athletes. i find it disrespectful of their accomplishments and hard work and distracts from the aspects of these individuals on which we should be focusing.

what a fucking creep. plus, the only real bjj video of him is a promotional video of him and a blue belt (his student, most likely), that he labeled "bjj highlight."

If Burkhardt is sucking him off then he must be soooooo vegan. Lol

This guy doesn't even know what real beauty is and I just can't trust a "man" who wears eyeliner. What's even sadder is this guy has people who train jiu jitsu under him and probably look up to him. Be an example, not a sideshow.

Wow . . .is this guy actually a real person? It falls into the "too strange to be true" category. I wonder what his Persian Panjo pick up strategies are? Color me curious.... : )