BQuick Jiu Jitsu is Brandon Quick's dealio.  The Stephenville affiliate run by Lewis was just opened in October 2013, according to the scrolling ticker on BrandonQuick.com.

I have emailed Mr. Quick asking for a statement and I'll update here.... 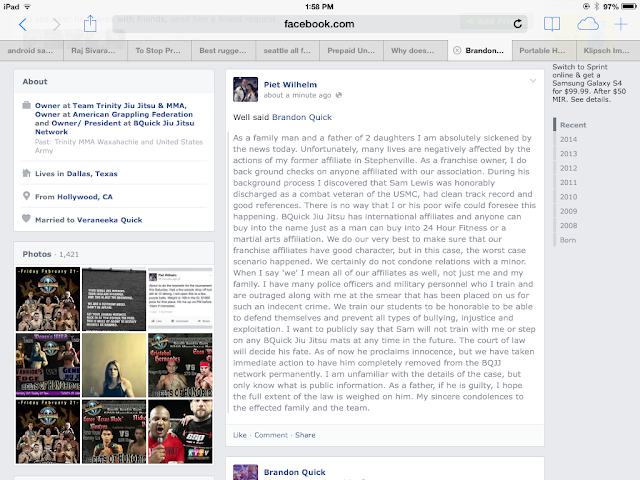 Hrm...while i agree that it was definitely the right move to boot him from BQuick as it's inappropriate behavior for an instructor, it was consensual (albeit not legally) and nowhere near the level of the whole Lloyd Irvin scandal. I wonder if perhaps we are stepping on the rights of a 14 year old girl to make her own decisions by enforcing these statutory rape laws. I hate to take a position on this without knowing more details of the situation.

Um, that's the point. If you're under the legal age of consent, you can't consent. Thus, it's rape. She doesn't have a right to make her own decisions in that regard.

Statutory rape laws are based on the premise that until a person reaches a certain age, that individual is legally incapable of consenting to sexual intercourse. Thus, the law assumes, even if he or she willingly engages in sexual intercourse, the sex is not consensual.

Another rationale comes from the fact that minors are generally economically, socially, and legally unequal to adults. By making it illegal for an adult to have sex with a minor, statutory rape laws aim to give the minor some protection against adults in a position of power over the youth.

Wow, yeah, there's definitely a reason we have statutory rape laws. I thought everybody was cool with adults not having sex with kids despite the "violation of their decisions".

On a totally different note though, I wonder if people have reacted a little too quickly to the allegations. As a male who's been working with at-risk youth for over a decade now, the scenario of being falsely accused of molestation/rape etc always hangs over your head on a daily basis.

Obviously in this case the law had enough evidence to arrest this guy but I know at least one case where a (female) co-worker's career has been ruined due to false allegations. Despite the fact that she wasn't found guilty, she now has a permanent mug shot that you can access online and she can never work with kids again due purely to the fact that she was charged with this type of crime.

I'm all for keeping kids safe but it seems like (unless someone knows more than I do about this) we should hold out for more info before we go get this guy.

Bobby, I hear you. But I just caution everyone-- "we're" not "going" or "getting" anyone. I'm not sure what reaction you're reacting to (besides me posting this news report?) The legal system is going to do its thing, and we'll wait and read whatever comes out. And frankly, I think it's appropriate for people to make up their own minds regarding whether he should be teaching teens or young people again in the future, whether he gets convicted or not. Many a slip twixt the cup and the lip and I'd rather err on the side of protecting young people... but that's me :)

"Um, that's the point. If you're under the legal age of consent, you can't consent. Thus, it's rape."

Calling it Rape kinda waters out the word.
I'm pretty sure this young girl had a MUCH better time with this man than if she had been dragged, beaten and raped by a stranger.

Now where I live we have the same laws, but set at a much better age of 15(18 if the older person has some authority over her - e.g. a teacher as in this case).

It's retarded that two people of 17 and 9 months can't have sex with his or her partner of 18.

So I agree that it's statutory rape and that the law needs to be there.
But to say it's the same as rape is insulting to anyone who has been raped.

Rape is a legal term. It means sex without consent. Not "sex that isn't fun" or "being dragged into an alley and forced" or anything else. It's still rape even if it isn't a stranger, in an alley, with a gun to your head.

Here, also, a person who is 17 can have sex with their 18 year old boyfriend/girlfriend and not worry about being charged with rape.

Please note a 14 year old who is preyed upon by a 23 year old in a position of power and authority over them would be seen as a victim in Denmark or the US.

Well, of course it's always smart to err on the side of caution. Again, the police had enough evidence to arrest this guy, but I suppose what I was reacting to was to how he was denounced as a sex offender immediately, especially by his employer without (admittedly by the employer) any further knowledge of what had happened aside from an allegation and an arrest.

Going back to my co-worker's situation, I think it was nice (and appropriate) of our employer to say that they were temporarily suspending my co-worker's employment until the case was resolved rather than condemn her on the spot (despite the fact that she would never go back to working with kids again).

I mean, you didn't just post the news report, you also posted the employer's response and praised it. I suppose that's what I was referring to when I said "going to get the guy" or whatever it was I said.

For all I know the guy shouldn't be interacting with teens in the future but as of right now I think, a) it's appropriate to suspend his employment/affiliation and, b) unfair to completely condemn the guy until we know something else.

The reality is that people will make the decision to not allow him to work with teens regardless of the outcome of this case.

PS, I had to look up what a "slip twixt the cup and the lip" was. And I call myself an English teacher. Shame on me ;)

Bobby.. I get you. And yeah, I praised Brandon's reaction, especially because I was comparing it to Lloyd Irvin's acceptance of DJ Jackson as chauffeur for the kids' program.....

On the other hand no matter what REALLY happened (anywhere from she's a liar who made it all up, all the way to he's a predator who manipulated her into having sex) it's a really really sad situation.

Georgette:
"Rape is a legal term."

I don't see the problem calling it "Statutory rape" which describes this case much better.

An example:
Saying someone owns a thing is correct, but people will be more informed if you call it a car.

I found this on wikipedia:
"In the aftermath of the December 2007 disclosure by then-16-year-old actress Jamie Lynn Spears, that the father of her baby is 18-year-old Casey Aldridge,[26] there was talk of the prosecution of Aldridge for statutory rape, which could be done under current Louisiana state law"

Qute, every state's law is different. I have to be honest, since I only prosecute death penalty cases for the last several years, my recollection is poor on the details of Texas's "romeo and juliet" provision. So I humbly suggest you google it (I'm under super killer deadline pressure at the moment or I would do it and sound much more well informed than my above confession.)

Since I am a lawyer, I try to use terms which have specific legal meanings in a precise way. Statutory rape is kind of a misnomer. It implies that it is less a rape, less a violation. That attitude is the problem. Just because someone might suffer less physical damage with one assault compared to another doesn't mean it's less criminal, less illegal, less a violation. That's true in any assault. Sure, an assault with serious bodily injury is punished more than just a slap. And you'd punish a torture-rapist more than "just" a regular rape. But someone who rapes a child-- even if they con the kid into not resisting and there's no physical damage? Uh uh.

Texas -The age of consent is 17. The minimum age is 14 with an age differential of 3 years; thus, those who are at least 14 years of age can legally have sex with those less than 3 years older.

So generally speaking, we can see that in Texas it would be legal for a highschool senior to con a freshman into sex, but not a college student.

I think we also need to consider the emotional and psychological stage of a 14 yr old (vs. 23 yr old). The intent of laws is to protect children, because they can’t protect themselves, because they’re easily influenced, especially by older people who children are taught to see as authority figures. Recurrent sexual abuse (adult or child) is facilitated when the victims are “consenting,” but are actually under the psychological control/influence of the perpetrator. In fact, most victims of abuse and assault are the “easy victims” (children, elderly, physically and/or mentally disabled, smaller/weaker, etc.), because the perpetrator feeds off feeling powerful. And a perpetrator is a COWARD.

Now, a 17 and 18 yr old might not be in vastly different developmental stages, but I’m not a lawmaker, and that’s not the issue being dealt with here. The burden of responsibility is on the adult to NOT hurt the child, sexually or otherwise.

Sam Lewis was found guilty of sexual assault of a child. The article hasn't been updated but he was sentenced to 20 years.