How did I get my start in jiu jitsu?

I get asked this question a fair bit, and since I just replied to a friend on this topic, thought I would share here:

I started in another art called Kajukenbo which includes jiu jitsu and judo, mainly because it was the martial art offered at the "regular" gym near my office, and I do not keep up with exercise unless it's both competitive and social. Running, swimming, biking-- BLARGH. Soccer, racquetball, flag football, AWESOME. I am very competitive, and very social, so martial arts seemed a good fit.

There is plenty of time to tap before it hurts too much, which gives you plenty of time to think about your counter, your reaction, and (at the time) that seemed plenty of time to act on it, compared to striking/kicking arts. I also grew to love the fact that there is no one set of moves everyone has to learn regardless of size, shape, attributes... instead there are a myriad of techniques and you will craft your own "plan" according to your unique strengths and weaknesses.

I didn't quit kajukenbo until I got my first belt, but as soon as our class did some jiu jitsu and judo, I knew that was where my heart was. Every minute spent striking a pad or doing kata was a minute I could and should have been grappling. To be fair though, even for a yellow belt test, you had to do real rounds of standup and grappling against 3 opponents each, so, I give kajukenbo a lot of credit I don't offer other TMAs.

While still training at the kajukenbo academy, I had the opportunity to do a seminar with Helio Soneca, a Gracie cousin, and I jumped at that like a duck on a junebug. This might be one of the earliest pictures of me related to jiu jitsu. The guy immediately behind me in the blue shorts is a good friend of mine, Ivelin, who is a purple belt in BJJ at Relson Gracie Austin. Helio is sitting to the right of me in this picture and the kaju blackbelt is Tony Morel in a red shirt. 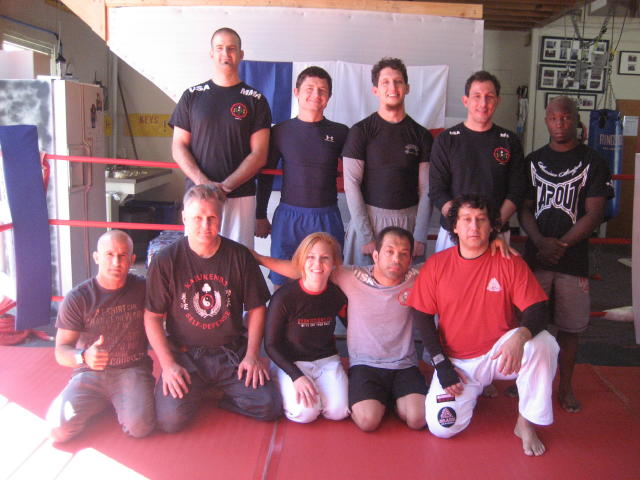 Never pass up a chance to choke a blackbelt :) 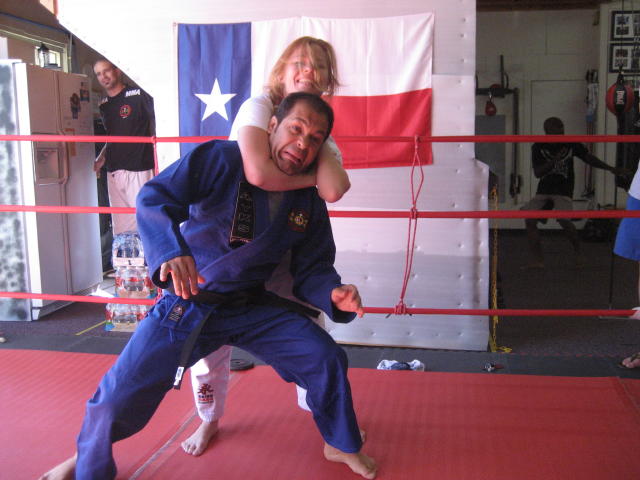 Then I told him I dance salsa, and he demonstrated his skillset there too.. 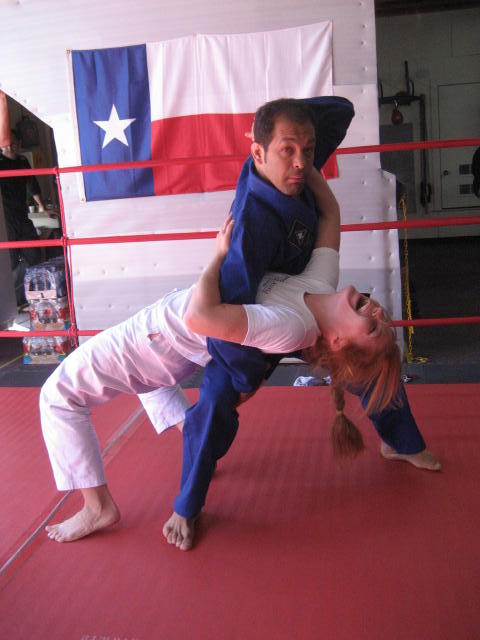 Once I quit kajukenbo, I started training around the corner at Relson Gracie Austin.  I did my first tournament a month later-- nogi, round robin, co-ed under 155 pounds.  These are the two other ladies from that division. 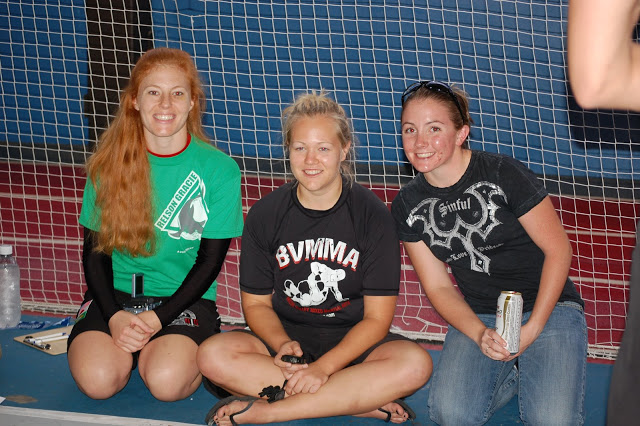 So it's not Thursday, but I don't care, it's Throwback Tuesday for me.  Have a good one! I gotta get to work, it's a busy week.

Did you train with Phil Cardella? I started at a Relson school in NYC (the Bronx) and Phil would come and give seminars. I took a road trip once. In Austin, Phil hosted me kindly and I got to roll with a few people. Perhaps you may have been training then. I actually saw Phil a few weeks ago when I drove down from CT to see him teach a seminar. Great guy.

Did you train with Phil Cardella? I started at a Relson school in NYC (the Bronx) and Phil would come and give seminars. I took a road trip once. In Austin, Phil hosted me kindly and I got to roll with a few people. Perhaps you may have been training then. I actually saw Phil a few weeks ago when I drove down from CT to see him teach a seminar. Great guy.

Why yes! When Phil was here, he was my primary instructor. Super cool! You're like a brother then :-)

That's true. A sibling hood of Relson Gracie folks. :) I changed schools when I moved to Connecticut but that Relson blood is still very strong in me. LOL The basic philosophy and approach is quite distinct! (At least that's what my current teammates tell me, and I've been at this new school for 4+ years.)

A number of us, from the Relson school in Austin, left to follow one of our instructors (Donald Park, a Royler bb) when Phil left and things at the academy were in flux. So I'm a Gracie Humaita girl now, and I must confess, I find many Relson approaches to things do not work as well for me. So I am working on uprooting them! But I value the basic philosophy of self-defense first and deemphasis on sport jiu jitsu very much, and remember fondly all my lessons from Relson himself. Do you know Daniel Pilewski? Tell him I said hello :)

I met Daniel at that recent seminar I went to. Great guy. I'll probably drive up to his school when we thaw from winter.

Funny, for me it is because my current school is more sport oriented that the Relson stuff has taken even more root in me. I love switching between styles (if you get what I mean). Great blog, btw, and continue the work you do. You got tons of support.