Wow, our team really did WELL this weekend! Not all competitors in this picture, and not all medals won are being worn, but it's a start.... 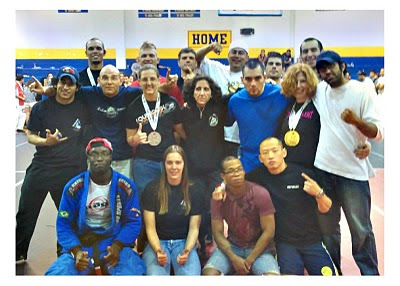 But how did I do? WOOO! I only competed in gi, only 4 matches total, but I won my division and the absolute!  And I owe it all to my team- especially Josh Lauber, Donald Park, Christy Thomas, and Richard Power for cornering me (I could always hear Josh loud and clear over everyone!) and Vidush, Courtney, Shama, Marc, Rebecca, Randy, Zack, Kirk and Jerry for rolling with me a bunch before this weekend... and Zach Lamano for his wrestling instruction... 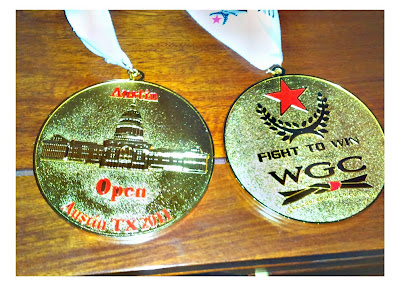 First match in division, against Kat Harrison. (Also fought her two weeks ago in Houston.) Won on points, 8-0.

Finals in division, against Tara Talanco. I could tell she was tired (she'd also done nogi, and I had a bye first round whereas she fought a very tough teenager named Ashley DeLeon, who I had to fight in the absolute..) so I had an advantage because I was fresh.  There were some moments where I knew if I hadn't had that advantage it might have gone her way.  Tara is one of my absolute favorites to fight because she feels like a better version of me; I wish she lived here in Austin so I could be her teammate instead. Won with a modified bow & arrow choke.

Then the absolute. First match against Ashley. Won on points, 3-0.

Finals, against Tara again. First video is ours, second is from the tournament people. 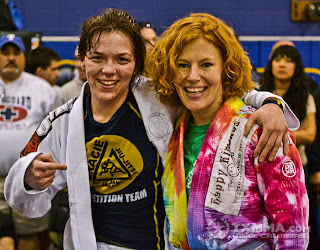 And I won this nifty gi for winning absolute, from Dom Fightgear. 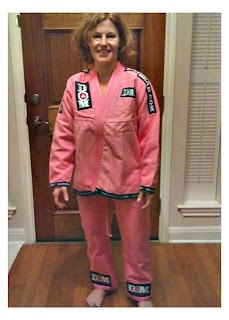 It's cool not only because of the color, but the jacket is lined with a sleek, microfiber, not-stretchy fabric. I washed and dried it, then wore it to class the next morning... the pants are ripstop, a little slim in the cut for my fat derriere, but they work. The jacket is excellent. I will write a full review when I've worn it a bit more.

AND, then I got this email:

Congratulations on winning the Women's Absolute Division at this past weekend's 2011 Austin Open. In light of that achievement, your final match was named today's Featured Match of the Day. Catch it now right on the main page of TXMMA.com. 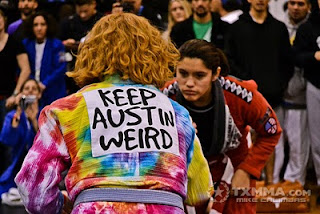 Me and Tara, finals of division... 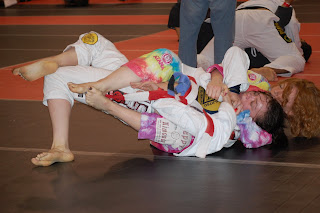 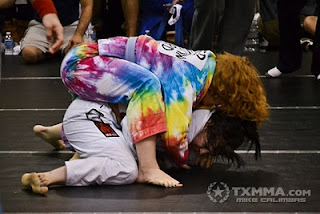 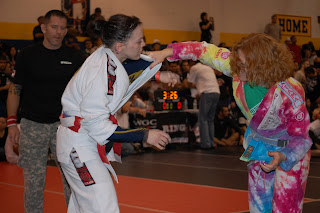 Right after the tap in finals of absolute. 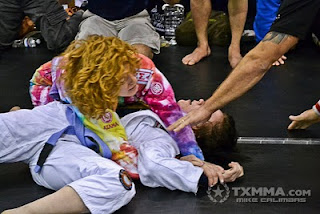 Finals of absolute while I spideyed... 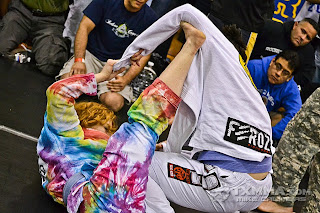 Too much work to do, and not enough time to do it, much less all the working out I need to do.  Gotta run.

Holy crap! Well done! I am really happy for you!

*TWO* golds, and one in absolute! That is so great to hear.

That last match is great. You did well with a strong opponent threatening the top. It looked liked you tucked the leg when you stood up from half guard. Nice.

Your kimono looks great too! You should consider getting the frog as a gi patch. :-)

Nice Job! Keep the momentum rolling. Like your control and transitioning into and out of Spider to DLR in the last clip.

Congrats - well done in that last match. You move around very well.

Hey Georgette! I am Rocky Haire, Agent for DOM FIGHTGEAR--I would love to get a copy of your full take on the Gi you won. It's rockyhaire@hotmail.com We worked a full year to perfect this gi, and the work is paying off. The world is starting to want one = )