But at least I'm in the "one step forward" part of the progression. Funny how I'll go a week or two just feeling miserable-- crying, pouting, having horrible rolls, getting just creamed all over the place, complete ineptitude-- and then poof, have a couple good days in a row. That's been the lately for me.

I've had some really good rolls with upper belts who make me work for everything and then tell me what I did that resulted in success. (I seem to need that affirmative feedback which helps me isolate what part(s) of all my effort was the key part.) I've had a number of good rolls with whitebelts and bluebelts too, in which I play all kinds of experiments and try for the new stuff from my seminars. And yes, I know, I owe you so much-- Jacare, Royler, Zach Lamano. I have been tearing-my-hair-out busy lately with work and training and holiday stuff. Need to finish watching the Gracie Bullyproof set as well and shortly will be posting a short series on Gifts for the BJJ Lover in your life. But anyway-- I also tapped my first fully-resisting adult male purplebelt the other day and it felt so. freaking. good. :)

I am fully recovered from the stomach bug thank goodness. The Christmas tree is up and decorated-- have a few more things to hang around the house but otherwise decorationally I'm all ready for the Christmas party I throw on the 11th. (If you are here in Austin that Saturday night, you are invited. Email me.) 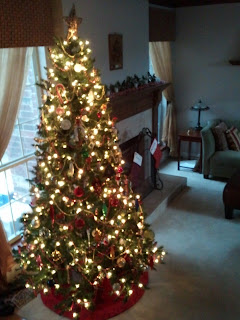 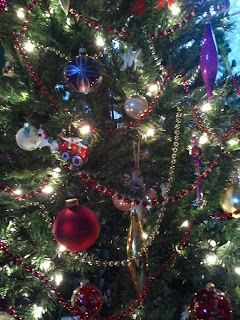 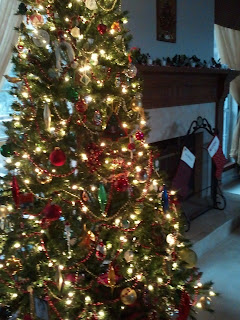 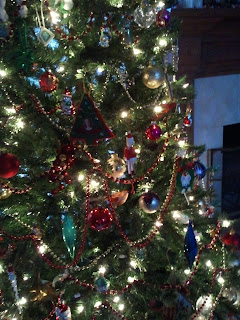 I'm a lot happier than I was a couple weeks ago. Combination of things: jiu jitsu is looking up (but that's a circular thing too) and I'm reaching some peace with big decisions in my life... and that it's the holiday season doesn't hurt. I screwed up one of my big holiday traditions (listening to the Nutcracker while I cook Thanksgiving dinner, but I was too sick to care) but I am back on track with the rest.

I'll finish babbling and let you get back to your Cyber Monday shopping (ahem-- did anyone get that Shoyoroll Batch 8 gi that was out for 12 hours only on Friday???)

So yesterday I did class, it was all on halfguard, some passing techniques I don't usually use but I like them and need to add them to my repertoire. I had a good roll with Dan, a super powerful brownbelt who is smaller than most of the guys and has taken me under his wing to show me how us smaller peeps can make use of our attributes. Really enjoyed that. Then I noticed that we had a female visitor-- the girlfriend of a local blackbelt who came by to train with our head instructor-- and she was sitting on the side of the mat. She's a whitebelt, but has been training a while and recently won her divisions at NAGA so she's good. She told me she wanted to roll with me at the Royler seminar but it was pretty crowded and I had plans afterwards so I couldn't then. Anyway, I invited her to roll yesterday and it was interesting.

She's small, like Rebecca the 4 str blue at my academy, and she seemed fairly timid at the handslap, so I proceeded with kind of a mellow, happy-go-lucky attitude and a decision to play guard and see what she had. After all, she's still a whitebelt, she's a small girl, I probably have 20-22 lbs on her, and there's no need to go apeshit. But she is waaaay stronger than Rebecca, way more aggressive once you get going, and within the first 2-3 minutes, managed to knee me squarely in the mouth. I quickly reassessed my mellow approach and switched to more of a top game, smother-her, tire-her-out strategy. I was irked that she got makeup all over my gi but I suppose it's fair since I bled all over hers. She tried to muscle me into an armbar from guard but she's not strong enough to make that work. She has an amazingly powerful upa and protected her nearside arm very well, but left her farside arm out for too long. I almost americana'd but ended up armbarring her. (I hate when you have someone locked out fully and they have no possible defense, but they make you bridge into them to force the tap. I have complete confidence in my control but still, why force the issue? if they have you dead to rights, tap, move on.)

She tried to kneebar me a few times but left herself open to some knee on belly. She also got snarled up around my leg in some weird twisting kneebar/heelhooky kind of thing. I didn't feel at risk from the position but I also had no faith in her control or judgment, which confirmed my prior view that I don't like it when spazzy whitebelts try for kneebars and heelhooks.

Finally, I just smashed her from mount and then pulled off the mounted triangle transition I learned in the Jacare seminar to one of the sweetest ever, most satisfyingest triangle finishes I've ever had the pleasure to savor.

Wow, Austin small world. Checked out the Relson Gracie Austin website turns out I live just a 5 min. walk south on Manchaca. I'm defantly going to have to check it out. I've kind of ben looking for a place now that I've started to lose weight. Was becomeing a couch potato.

LOL, I too occasionally got caught by the "but they seemed so timid and calm during the hand slap", so now I'm not underestimating anyone from the get go. Everyone is a crazed competitive crazy freak until proven otherwise. Women especially talk a lot of sandbagging b.s. right before they try to wipe the mat with you. Not falling for that ever again.
;)

Whatever happened to humility?

Maybe the reason you go one step forward and 2 back is that in one post, you manage to congratulate yourself for tapping out one of your training partners in practice, and then smashing a white belt who's smaller than you.

Karma may be out to get you when blue belt boys breakdance on your back.

Hahaha! Go Georgette!! I too have been victim of the sneak-attacker. Think you handled it quite nicely. ;)

If you really think I lack humility I think you probably don't know me very well. I am incredibly hard on myself and very humble about my place in the ranks and the world. Nonetheless I am allowed to be happy when I succeed and sad when I fail. Nothing wrong with that I hope. Still, I'll take your comment in the spirit in which I trust it was offered- that of constructive and friendly criticism, and I'll try to be less proud of my successes lest it be misinterpreted.

You and me Georgette! It has to happen one day. You'll write, I'll do the illustrations = we'll produce your own Marvel style Comic: THE ADVENTURES OF RED MENACE!

I just love reading your thoughts!

Why is it that when people leave criticism like that it's always anonymous?

Another anonymous agreeing with anonymous above. Training is training and posting about choking the snot out of someone else and complaining about her getting makeup on your gi is a good way to lose good training partners. Most people never even talk about how their rolls went with others out of respect, let alone posting it for the world to see. Your heart is in the right place, but you're unintentionally stepping over a lot of lines on this one Red Menace.

I'll say this-- I don't think wearing makeup or not has anything to do with whether you're a quality training partner. I was just being snarky.

But I don't think (in my world view, and I know others differ) that throwing twisting leglocks around, when you've never rolled with that person before, in an academy where you've never rolled before (and therefore don't know that generally we don't have whitebelts doing anything more than a straight ankle lock) is part of being a "good" training partner. Nor is the more difficult to define "vibe" that I felt-- the inconsistency between the words and handslap (all of which seemed timid and hesitant) and then the sudden intensity and vigor of the roll (which seemed aggro and competition-level)... seemed a little sneak-attack-ish. Therefore not very "good training partner"ish to me.

Most people don't talk about their rolls? hahaha... I hear it all the time. And if you don't like that I blog about my rolls, don't read it.

Sorry for stepping over lines. Definitely not intentional.

Sounded like she wanted to beat the crap out of you and you responded with appropriate measures. It's goddam spar after all, what do people expect? Tiddlewinks? It's your blog you write what you like!

She dictated the pace and intensity of the roll and subsequently got what she deserved. Touch my knees (especially if you are a white belt) and I'm not gonna respond nicely. Oh, and the fact that she had never rolled with you and never been to your academy makes this thrashing all the more valid. Don't come to my house and bust out the trojan horse you aren't gonna make any friends that way! You did the right thing Georgette!

I, for one, am more interested in what really happened during a roll and what someone was really thinking. Even if it's not "nice" or "humble" or whatever description you think it "ought" to be. I don't like reading holier-than-thou, I-claim-to-have-no-ego, censored-and-polished posts. Sometimes I cringe as I write or reread my own posts, but that is what happened and that is how I felt at the time.

Thanks. I'm far from perfect. I have ego problems, I'm insecure, I let my personal life issues affect how I feel about my jiu jitsu life issues. I have a lot of growing to do and jiu jitsu is just one of the petri dishes in which I strive for progress. Keep on telling me what you really think and I will keep on telling you what I really think. :)

"Women especially talk a lot of sandbagging b.s. right before they try to wipe the mat with you. "

Uh...I'm a guy and I've had women do that to me too, go for broke right off the bat, it's kinda discouraging when you are expecting them to be technical and here they are all angry and aggro.