My niece in Istanbul

My niece Ali lives in Rome with her husband and two daughters... but she spent a long weekend with girlfriends in Istanbul recently, and isn't she gorgeous? This is her (in the middle) in front of the Blue Mosque. 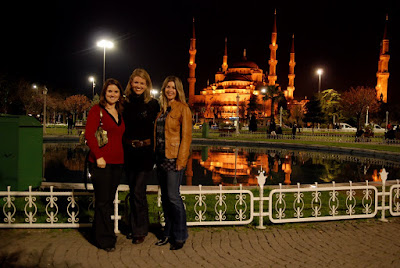 I've discovered my new obsession... martial arts. It's not technically new, I was obsessed in 1998-1999 when I had a great dojo and great senseis in Virginia. But I moved back to Austin and just didn't find someone I clicked with, so I moved on to other interests. I'm fortunate to have found Robert Reed, Tony Morel, and Tom Krausz and so my return to martial arts.

Once again, I'm in a mixed martial arts setting. In Virginia, I studied with two senseis who taught a blend of aikido, escrima, tae kwon do, and a few other things I've since forgotten. Now, I study kajukenbo (KArate, JUdo JUjitsu, Chinese KENpo, Chinese BOxing kung fu) and informally, jiujitsu as well. I'm really passionate about the grappling side of things. It's a challenge because I'm smaller, weaker, and not as well conditioned as most, so I will need to focus on perfect technique and the mindgame aspect. It's good because I don't like punching and kicking people-- I like to be able to hurt them enough to tap them out, but not more than that. The satisfaction comes from beating them, not beating them up.

So I'm training somewhere around 10-12 hrs a week in martial arts, another 3-5 hrs of conditioning, and trying to bribe as many people as I can to roll (spar) with me by baking untold dozens of cookies. If I can make them a little fatter, that doesn't hurt my feelings any.
1 comment:

Our photographer is in the thick of wedding season, so the complete set of her pictures won't be available for another month. (She had to photoshop out a lot of bruising on my arms, since I took up jujitsu about a month before the wedding.)

However, she posted some to her blog:

and our friend Fabian posted his:

and Janet posted hers:

And here's my favorite so far, from Janet: 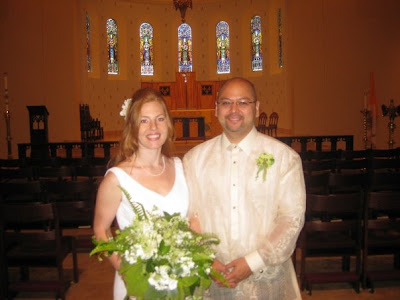