If you haven't already, you really must clear your calendar and watch everything BJJScout posts on his site.

BUT... his latest series of additions just came to my attention.  And the crowning jewel (for me so far, I haven't watched them all yet) is the breakdown of Keenan Cornelius' new guard, the Worm guard.

It's nasty.  Watch it.  Sexy, no?  My idiot bluebelt self concurs this could be a huge development in sport BJJ.

I'm so mad I promised I wouldn't train a whole month.  (I had that injury, April 20.  Was feeling better.  Went out to Seattle which is a "whole nother" story in itself that I promise I'll tell.. anyway I was in Seattle for a week mid-May, and look, how can you go somewhere new with lots of friends who train and not train?  So like a dingdong, I trained 4 days in a row, nothing hard or crazy, but it aggravated things.)  A whole month means June 15...

But I wanna be trying this NOW.  In part because I liked the Scout's breakdown of Michelle Nicolini's shin/spider guard so much I'm trying to make it my own.. and the Worm works with that.  Here's part one of his Nicolini analysis.
4 comments:

So much sexism, so much male entitlement...

I begin this post with a confession and an apology; towards the end, a repost of some scary shit from Ronda Rousey's mom about martial arts and sexual abuse.

I Facebook way, way more than I blog.  I'm sorry-- it's just infinitely easier.  I have my phone with me all the time and it's just sooooo easy to share on my wall and come back later to discover the fantastic debates.

I used to blog A LOT, but... well... like I said to my best friend the other day... Everything I want to talk about is too important to say in public.

I want to amend that a bit... everything I want to talk about is either too important to me personally to put out there in a public forum (like, how I feel about training, my academy, my personal life, etc) OR it's too important to give it short shrift.

And lately (ha, the last six months? last year?) I just have been prioritizing a bunch of very time consuming and energy consuming things to the extent that I had little left for the kind of methodical, thoughtful exposition I'd want to put my name on.  After all Facebook is fine for dump and run, but the blog is the place for real journalism, expression of opinion, etc.  Plus, towards the end of April while Slideyfoot was here visiting again, I suffered what initially seemed a mild training mishap, and has turned out to be the tip of the iceberg revealing a longstanding degenerative issue in my neck.  (Basically, I got accidentally cranked during a good training partner's attempt to do a negative pass of my halfguard, and what seemed to be a sore shoulder and pinched radial nerve is actually a bulging cervical disc and pinched nerve way up in there.  And my neck is on backwards, and I'm growing disgusting bone spurs all over my neck that look like a stegosaurus origami.)  So typing and mouse usage has been excruciating, and I *have* to do that all day at my real job.  So my fake job (here) again suffered.

In the last six months, I have had six family members or VERY close friends die.  It's sucked.  But, anyway...

I think my "journalistic" focus has broadened quite a bit from "wow, I can't believe what an asshole Lloyd Irvin is" to the shocked and horrified and motivating discovery of the depth and breadth of rape culture and misogyny in the world.  In fact I feel like that's becoming a bit of a calling for me, and I'm trying to integrate that into my career and bigger picture plans.

If you're not my friend on Facebook, please, friend me.  I'm there allllll the time.  And that's where a lot of my discussions about social issues (of all kinds, not just rapey stuff) happen.

ANYWAY: thanks for listening, I WILL continue to blog as I can.  Reviews, yeah, but I will try to add some thought-out thoughts on all this shit that's in the world.

Scary stuff from Ronda's mom about kids in judo and sex abuse:

published on her blog The Business/Judo of Life //

Why I don't recommend martial arts for victims of abuse
Recently, I was having a conversation with someone whose stepchild had been a victim of abuse. I was going to suggest martial arts as a means of building self-esteem and learning self-defense ... and then I stopped myself and did not.

Here is why -- because in my 43 years of experience in judo, I have seen a higher proportion of sexual abusers than I have in the general population. I suspect this is also true of other martial arts. Now, it's true that this is only limited to my experience, but in 43 years, traveling around the world, as well as monitoring the news on judo fairly closely, that experience includes a lot of people.

There are a few reasons I think this is true:


To sum it up, you have a setting where physical contact between an adult and a child is allowed, where people with minimal to moderate screening  are in positions where they have unsupervised access to children and are put in a position of authority over them.

On top of all of that, there are certain characteristics that make abuse more likely to occur.  The vast majority of judo instructors are male and over 90% of sexual abuse of females and depending on the study you read, 63-86% of sexual abuse of males occurs with a male perpetrator.

While being a victim once is awful enough, repeat victims of abuse suffer even greater trauma, and people who have been a victim once are at greater risk of subsequent abuse.

That is not to say that victims of abuse should not do martial arts, ever. There are people I would trust completely.  Jim Pedro, Sr. , Tony Mojica, Steve & Becky Scott, Karen Mackey - I could give you a list. The point is, all of these are people I have known for years.  I would feel comfortable recommending any one of them INDIVIDUALLY.

However, I would not feel comfortable recommending judo, or martial arts in general, and since I did not know anyone who lived near this particular family, I caught myself and just expressed sympathy and recommended family therapy.

The reason I wrote this post is that I think people who love martial arts often DO recommend judo, jiujitsu or whatever it is they do as sort of a knee-jerk response, because, after all, it may be great for them. For some children, though, it may be the worst possible thing to do.

And to balance the sad:

I'm a big fan of the "Combat Warrior" rashie and spats, designed by Meerkatsu and made by Combat Skin.

I'll start by saying I wore the rashguard and spats in a lot of nogi classes as well as under my gi, for a few months.  I had my teammate Joseph wear the spats for pictures just so you could see a different body size and shape.  But then at the end of April I suffered an injury (pinched nerve and bulging cervical disc). This injury made typing and mouse usage really really painful, so every moment I was capable of typing, I had to spend it on my real job.  Fortunately, I'm better enough now to spend a little time on a keyboard for this review (Plus I'm sitting out a rainstorm on Memorial Day, how appropo.  Not training, not barbequeing, sitting on the couch.) 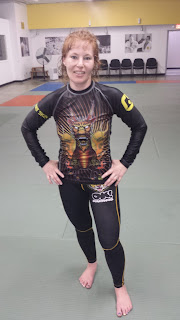 Meerkatsu drew a qilin for this piece.  A qilin is an ancient Chinese heavenly creature who Combat Skin describes as "benevolent and kind, but transforms to a fierce and powerful beast if good is threatened by evil so it is the perfect analogy of a true martial artist and represents the warrior spirit within."

My only gripe is that it is a little long in the torso for me, so it rides up to my waist... but on the plus side, it doesn't show my belly skin, even so.  It was really smooth and comfortable material, with soft, interlock stitched seams.  Usually I don't like a high crew neck, but this one never felt like it was choking me, and the arm seams didn't irritate or feel tight. 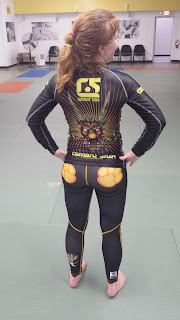 Here's Joseph, wearing the medium size spats.  He's 5'11" 180lbs, and wears an A3 gi.  The spats have a waist drawstring and you never feel like they'll slide over your hips while rolling.  They fit me fine, a little long as you would expect, but I liked that they didn't look see through (even though the inside of the fabric is white, so when stretched, they do have a little white in the background.)

I was comfortable wearing them alone, without board shorts, for training, but Joseph was not and had to be bullied a bit to pose for these pictures (hence the blur, and the awkward expression.  Also dig the photobomb in the background.) 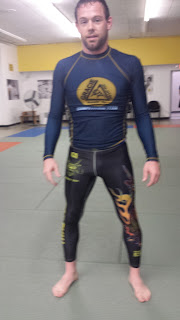 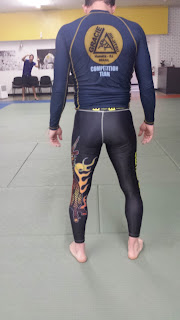 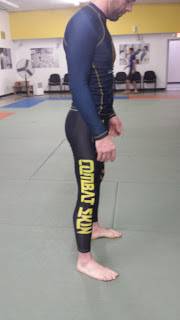 I have washed these in the machine on hot and dried in the machine on hot, a bunch... at least thirty times... and noticed no shrinking or wear.  There was a little fuzzing on the forearms, but that's pretty expected and not bad after a few months' worth of wear and tear.

The rashie is $59 and the spats are $55 on the Combat Skin website.  You can get 20% off your whole order, if you use the discount code "BJJSCOUT" when you check out.

Other reviews out there:

Detales Clothing just opened their online store.  Not gis, but nogi and under-your-gi stuff designed by women in jiu jitsu, for women in jiu jitsu.  Lightweight compression gear for under the gi, including a nice light capri-length legging, athletic bras, and shorts, as well as heavier thicker compression gear for nogi, including grappling tights, a short sleeve rashie, and board shorts.

Plus,  NO PINK.  NO LAVENDER.  NO FRILLY DAMN BUTTERFLIES AND KITTENS.

And 15% off if you use discount code #BJJWomen when you check out through the end of May!

Check out a great tournament hosted by the Machado family, in Austin July 26th. 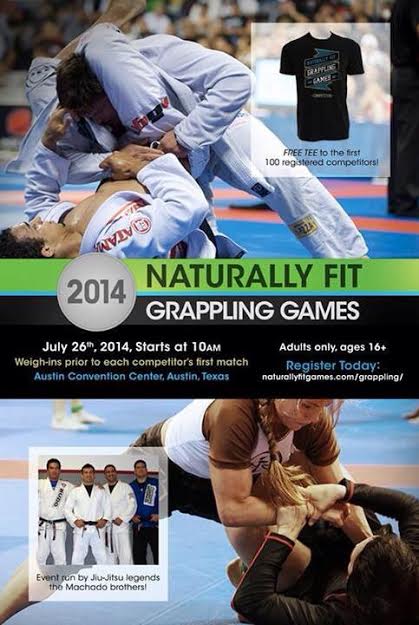