As in, it's torture to have your baby inspected. What I believed at first to be a "small" foundation problem seems to have morphed into thousands of dollars of repairs. I think it's a combination of a few things: I didn't fix everything about the foundation that could be fixed when I bought the house (just what really needed to be done); old houses are like people, they gradually deteriorate over time; when you don't have a home inspection done regularly you are unaware of those changes; I haven't been under the house in quite some time (I think getting the dead possum out traumatized me); each foundation repair estimate bid on doing a slightly different set of things to the foundation.

What does all that mean? Well, their estimate came in at a figure I first thought was high. The more I learned, the more I realized it was probably a figure I would be happy to pay to get the house into better shape. Fortunately, they did not insist on me fixing it before I sold it, and were willing to accept a reduced purchase price.

That was hard to swallow for me at first, because I paid $8k less than what they're paying me for the house, but I've easily put in $40k-50k over the 3 years I've lived there. Between roof, paint, minor repairs, foundation work, landscaping, irrigation systems, and so on, it all adds up. But then I looked at it this way-- the asking price was fair for the house in the condition I believed it to be in. The end price is fair for the house in the condition it really is in. I can't ask for more than that-- but I did get the peace of mind from selling my baby to a family with the means to give her whatever she needs, and they'll never have to decide between fixing the car and fixing the house, for example. That is the best kind of owner I can imagine for a historic home. I just want to make sure that I did everything I could to preserve that glorious house, and since on a state employee's salary it's not really feasible for me, at least I have seen her into good hands.

*sigh* I will miss that house!

But I am looking forward to the new one, which had a very positive pool inspection yesterday. Every time Mitch and I go there we like the house more. It does lack a little bit of the old-fashioned charm, the window seats, wood floors, and tall ceilings with transoms particularly, but I am willing to exchange those for being in town, close to Mitch's work, and having the nice deck. It's a great house for entertaining and I'm looking forward to throwing a good pool party as the housewarming.

So that's the update-- good, bad, up, down, stress, and relief. Now Mitch spends the weekend in Dallas, returning a friend's waverunner so I can use the garage space in between moves, while I spend the weekend in Bastrop packing like a madwoman.

In fact there is life outside the house-hunt!

Last weekend we were in Houston for a great free concert-- incredible Latin Jazz and salsa pianist Larry Harlow played with the Houston youth group "Caliente" and it was a wonderful performance. Great weather too! We stayed with our friend Jerome in his new and fabulous townhouse. Sunday morning Mitch and I had dim sum with my friend Dr. K and his wife and two sons (and one son's girlfriend)... yum!

But the weekend before we were in Houston also, for the Texas Salsa Congress. Here's just two pics...

Me, Mitch, and one of his salsa students from Austin, Meredith.

And here's our pal from Dallas, Jessica, dancing with someone I don't know... 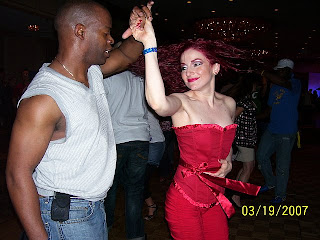 I wish I had more pictures (of course these were pinched from Adriana!) but I was too busy dancing :)

Today we go to the inspection on the new house; yesterday was the inspection on mine. Turned up a small foundation problem, but they're getting bids on the cost to fix it and we extended the option period to Thursday to accomodate. Cross your fingers!
No comments:

So, my house (the Victorian) is being inspected today, the last day of their option period, and closing is set for April 18. Whoohoo! I was going to lease back for a while, to make the packing process less stressful, but they want me to pay MORE than my mortgage payment (which means also MUCH MORE than the rental value!) so I decided to skip next weekend's salsa event in Dallas and just pack. I'm going to make every effort to move out on April 17, and spend the 18th cleaning before the closing. Ugh, the next couple of weeks are just going to be crazy! I have a deadline this Friday, and a HUGE deadline on the 16th, and every spare minute not working will be spent packing.

Then there's our NEW house! It's under contract, hooray. Inspection is tomorrow afternoon; closing is set for April 30. Unfortunately they want to lease back until June 30th. So-- I'm moving all my stuff TWICE! and having to store it in the meantime! But the sellers of the new place are putting up money towards our closing costs to accomodate us, which is nice. I like to look at these negotiations with an eye for making everyone feel like they won and got what they want/need. If they need time, we give it, if we can. And though I hate, HATE living in an environment of boxes, stacks, clutter and excess furniture, I will put up with it.

The new house is wonderful. It needs hardly anything. The only must do's are put up solar electric panels on the roof, replace the electric cooktop with an induction model, and pull off the peeling wallpaper in the master bathroom. The cooktop thing isn't just a snooty cook's preference, it's also a safety issue. I never knew this until recently but induction cooktops don't get hot-- they just heat up the pan-- so if you put your hand on it by accident you won't get burned. That they are also supposed to be much better than even cooking with gas is a side benefit I'm happy to reap!

Aside from those 3, there are some preferences: replace the beige family room carpet with tile, replace the tile in the master bathroom, put in a double oven instead of a single, repaint the formal living room (soon to be my library) because it's way too red.

Anyway I need to work. That's the update!
No comments:

Full price offer for my house!

Sorry I have been lax in posting. We had a young couple very interested in the house-- the wife came out to see it 3 times-- and they were considering making an offer, but last Friday the 16th my realtor had a realtors' open house and luncheon, and one of the attendees loved the house. Loved it so much she advised her Houston clients to make an offer sight-unseen. It was going to be a less-than-asking offer, but because we had this young couple on the line, the Houston folks ended up making a full price, CASH offer yesterday!

I got to meet their agent and learn a little more about them. They're the Collinses, and the husband is CEO of nineteen companies. They already own two historic properties in Bastrop, including the fabulous brick mansion known as the Judge Page estate right up the street from my house. They want my house for their weekend guests. Apparently they have more money than God and will have a whole team of caretakers, gardeners, etc. So my primary worry (that my house wouldn't be well cared for and preserved) was put to rest. I wish it was going to someone who would love it all the time-- but I'm not going to be that picky. I signed the offer and assuming all goes well in the next 7 days (the option period) I will be closing on April 18th.

So, today after work Mitch and I are looking at houses with Jim, our agent. My work deadlines are sheer insanity for the next few months-- but hopefully between moving, packing, new house, and everything else I'll still be alive in August, which is when it looks like Mitch and his parents will be going to the Philippines. If I'm still breathing, I'll be going with them!

So that's it for today. I still have eighty million pictures to post-- the ice storm from January, Christmas and New Years, and all the final photos of my baby.
No comments:

That summarizes it... I'm watching a case for my boss while he is out of town and it's been hopping as far as pleadings filed and responses required. Spent the weekend very enjoyably-- Saturday was the last touchup day for the house, and Sunday we spent some time in Zilker Park at the Kite Festival. Way cool. We also looked at two FSBO houses in Mitch's neighborhood which ironically were both the exact same floorplan. They were okay, but not wow- and we have heard some not-good things about the public school in this district. So now we're hesitating until we learn more about the schools.

I'm going out to Bastrop this afternoon to take photos. Should have a bunch up tomorrow; the house should be on MLS tomorrow too. I'll post the MLS number if you want to look; the virtual tour photographer will be there today taking all the pictures, and you should be able to see the tour by the end of the week.

Cross your fingers! :)
No comments: