The jiu jitsu community is the bomb :)


First, welcome back from Thanksgiving, did you get fat?  I was so bloated from the hormones and steroids for my IVF cycle, on top of extra padding from not training so long, I really didn't get any fatter despite eating my weight in food... but anyway!

One example of the wonderful jiu jitsu community-- I enjoyed a visit with Slideyfoot from Gracie Barra Bristol in the UK.  It was his first trip to the US and he did a BJJ tour of Texas! 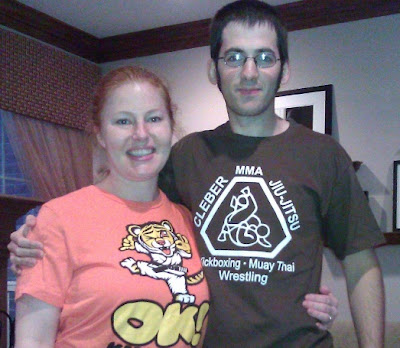 Couple days in Dallas first, where he got to train at the Machado school with Triin of Fenom Gi, and stayed with a complete stranger he met on CouchSurfing.  Then he came to Austin and stayed with me and my husband for a week... sadly, I wasn't training, but he did get to train with my husband at his academy (a Cleber Luciano affiliate).  He also trained a few other places, did some touristy things, saw a Walmart (it was on his list of things to see!) and helped me prep dinner for twenty on Thanksgiving day, and better yet-- clean up afterwards :)   It was fantastic getting to know in person someone I've known on the internet for years... Slidey was always encouraging and helpful to me from whitebelt on, and I'm privileged to call him a friend.  (And now I have a couch to surf in the UK!)

Let me interject another facet of fabulous BJJ community-ness:  see that tshirt I'm wearing?  (The tiger was drawn by Meerkatsu!) It's from a SUPER-cool new gi company, OK! Kimonos.  They are a one-man business, specializing in kids' gis, and they offer a gi exchange!  When your kid grows out of his gi, you can send it back for a 20% discount on the next one... and Brendan, the owner, sends all those kids' gis to a free BJJ-for-kids program in the favelas of Rio!  There aren't any kids gis for sale at this exact moment on his site but I am assured they'll be up shortly!  Brendan tells me, "What occurred was the original pants for the gis weren't the quality that I wanted and I had to reorder them.  They'll actually be arriving this Friday to my house and if the quality is up to par, I'll have them up on the site on Monday, along with some AWESOME backpacks that I'm super excited about."  He's also probably doing a big sale for the grand opening, so please stay tuned if you have little ones!!

Unfortunately, the hormones I was taking were working a little better than expected, and my IVF doctor in NY called the day before Thanksgiving to tell me I'd likely need to get there early so I didn't miss the eggs' ready-time.  Had to change plane tickets for me and my husband, and had to abandon Slidey a few days early.  Thank goodness for good jiu jitsu friends who all jumped at the chance to entertain him, take him around, and make sure he made it to the bus okay for the Houston stop on his tour.  Check out all his reports on his blog.

We had a nice time in NY, stayed with cousins and had a successful retrieval of 6 eggs, of which only one made it to the proper developmental stage to be frozen, but hey, I'm 40 so that's actually pretty good to even get one.  We had to spend one night in the city, and ended up at a hotel RIGHT NEXT DOOR to Marcelo's academy!  Too bad my husband hadn't brought his gi, though I think Marcelo's original location is still out of service due to a water leak in the floors above them.  (I also think their temp location in Chelsea got washed out thanks to Sandy...)

One more example of how wonderful the BJJ community is... here is your opportunity to share with the less fortunate!  Remember the baby-BJJ community in Moldova and the Give a Gi program started by Christian the BJJ Globetrotter (below in the hat)? 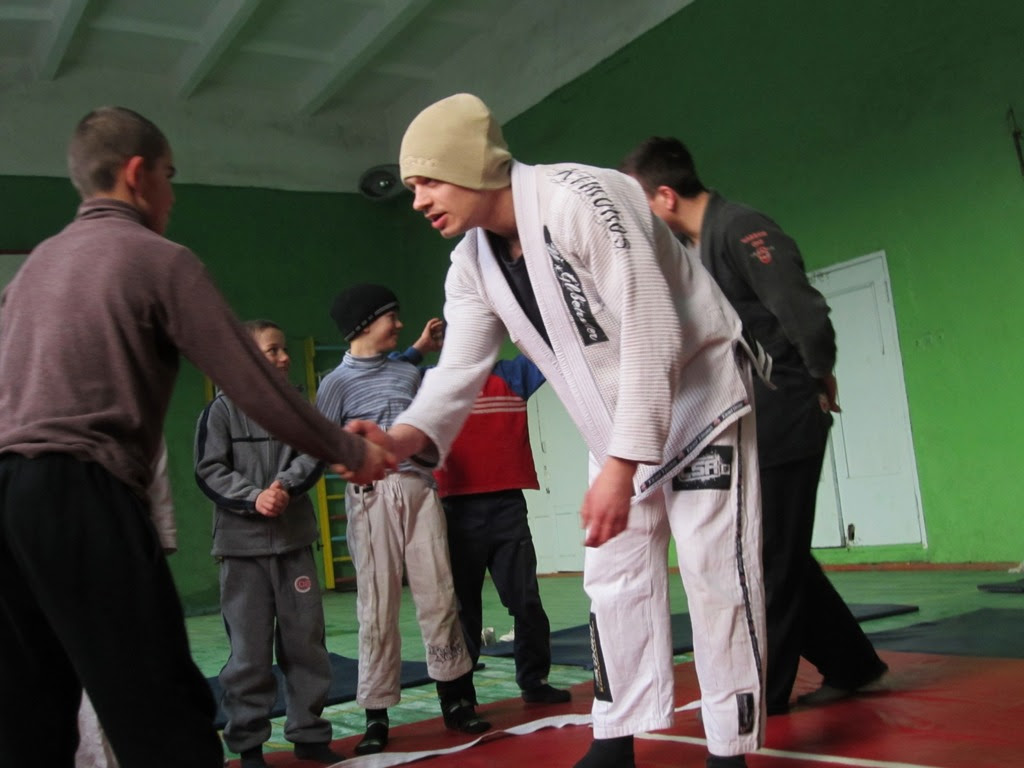 Well, Bobby, the Peace Corps guy who started BJJ there, is promoting the first ever Moldovan BJJ Cup tournament in January!  And he needs your help.  Please-- send him $20 and a patch from your academy.  He'll use the money to buy a gi (cost, around $130) and patch it up with all the patches he receives-- it will be a prize for the "competitor with the most heart" (to give everyone a fair shot at winning it, versus the usual prize for the absolute champion).   If there is extra money, it will help cover the costs for transport and entrance fees for otherwise indigent competitors or future similar projects (though your patch will still go on the gi.)

Depending whether you're in the States or Europe, please send a patch and US$20 (or your equivalent) to:

You can also paypal him the money, at bobby.mcmasters(at)gmail.com.

Thanks for being part of this wonderful BJJ community and do your part in spreading the love to the peeps in Moldova!

I had an amazing time! You are a fantastic host and it was an absolute delight to finally meet you in person. Very much hope to see you over here in the UK: you will definitely have a bed, not just a couch! :D

My full post on the whole trip is now up, here. ;)