On facebook the other day I posted this picture, which comes from here:

** Teaching women how to protect themselves works. Teaching predators not to be predators doesn't. That's why they're called predators.

** Most misogynists are timid little assholes who only have the courage to express their repugnant opinions from the safety of the Internet. They're not likely to assault anyone.

** The thinking presented in this sign . . . is sexist and dangerous. It is sexists because it implies that women don't have the same rights and responsibilities as men. That is, the right and responsibility to to prepare an adequate defense. . . . The thinking on this sign is dangerous because she plans to rely on the concept that "No one would dare!" to keep herself safe. And that is why we must all learn to defend ourselves against predators. Because they WOULD dare to cross that line and don't care you, or I, or your dean has to say about it.

** Hey it's not my fault that the lady in the picture doesn't understand that ultimately we are all responsible for our own wellbeing...

** The problem with activists is that they want to cram their chosen cause down everyone else's throat, and fail to see that the harder they push, the more their audience wants to regurgitate.

** Do we try to stop the rain from falling? There will always be selfish, wicked human beings and they will prey upon men and women alike. It is not an insult, but in fact a great service to be told how to defend against them.

** Every opportunity to say something doesn't have to include your own special viewpoint. School orientation isn't the bully pulpit for the feminists anti-rape-culture.

** This picture is what's wrong with the world today. Instead of taking something good out of orientation, she has to find a reason to bitch and complain.

** While we're at it we should do away with locks on doors and cars and just educate people to not steal from each other.

**   Is this another 150 comment thread of guys mansplainin' what this girl really needs instead of listening to what she's actually asking for?

Shortly thereafter, a terrifying article popped up covering a "banned" fraternity at American University in DC which had a massive leak of emails making their uber rapey culture an open fact. 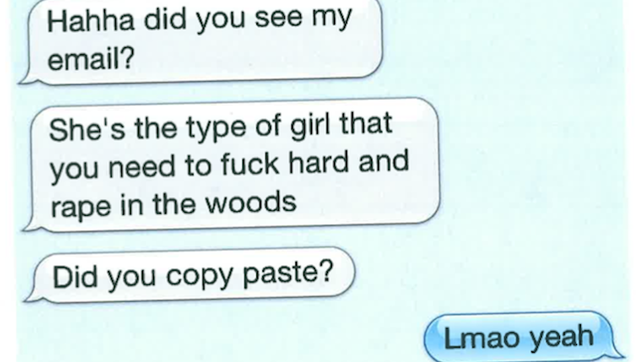 So here's my take on this in kind of brain-dump format-- copying profusely from my own posts on the matter, as well as those by some friends including James Stilwell of Alabama, jiu jitsuka, husband, father, and articulate humanist... and David Wells, friend, classmate and lawyer...

Sorry, but to say we shouldn't bother telling boys not to rape (as we wouldn't tell the clouds not to rain) is the height of both sexism and rape culture.

Broadly held, repugnant opinions loosely described as misogyny affect the general populace, and even if not a direct assault, the social impact is still real.  Forty years ago and maybe even today, racism made it possible to assault black people with impunity. Widespread misogynistic feelings make it much easier for people who are so disposed to commit sex crimes against women (among other things) and lead to the idea that we should place the burden of preventing rape on the people who are at risk.

I'd bet lots of college boys commit rapes that they have no idea is rape. Educate them about what consent means and you can prevent some, although not all.  Plenty of rapes happen because idiots think things like "she wanted it earlier, and she's not saying no now, who cares if she's drunk?"  Plenty of rapes are later excused by saying "well, I was drunk too!  so why blame me?"   Meanwhile fraternities put out how-to emails about rape-bait encouraging guys to get girls drunk so they can get laid. And yeah, I think they know roofies are not legit, but seems they all think getting her wasted is.
Rather than addressing the frustration the commenters above attempted to debunk its cause. The angst felt by this woman and people like her is well founded and justifiable. They live in a culture that consistently creates an environment where they have to be afraid and basically can trust no one. If they trust the wrong person, the society tells them that they should have chosen better.

The problem is that rape does have a really negative stigma in most people's minds. It's when you rephrase the question that the grey areas start to pop up. When you ask things like, is it okay to have sex with a sleeping girl if she's been into you all night but she passed out before having sex? Most people might still say no, if given a yes/no option but when given a scale of agreement these kinds of questions begin to reveal a startling amount of ambiguity among the responders.  A common thread in the arguments against the idea of rape culture is the narrow re-definition of "rape" as something that is done violently, done by a stranger to the victim, and done in a situation the victim could have avoided. This is obviously (I hope) a very incomplete definition, but it serves to omit "date rape," "acquaintance rape," etc. It's a useful definition for people who want to dispute rape culture's existence by demonstrating that they personally would never do something like *that*.

One problem I'm seeing is the insistence on a binary, forced choice, zero sum perspective. Why can't we have education on what constitutes rape and consent AS WELL AS self defense lessons... also, why equate that education of men with ineffectual pleas of "please don't rape" to a snarling malevolent predator... when instead it could very well be eye-opening lessons in empathy for self centered but basically well meaning idjits?

The majority of sexual assaults aren't violent assaults by a stranger in a dark alley. They're of groomed victims who have had boundaries encroached and often are friends-ish with their assailants, often intoxicated. So all the "how to beat a wrist grab" and "how to beat a bear hug" won't help them as much as telling that asshole in Steubenville that he shouldn't walk away from a passed out drunk girl being sodomized because yeah, that counts as rape too.

It is also twisted to compare rape to rain or any other natural phenomenon. Rape is caused by the decision of a person, it is not something that just happens like rain or the sun rising. It's not something natural we just have to accept.

The part that irks me with this kind of knee jerk response on social media is the complete and total inability to empathize and internalize what is being said. Instead you have this instantaneous provincialism. It's not my team's fault, it's your team. Scarcely more evolved than "I know you are, but what am I." We have these amazing tools for communication and yet so few people listen to voices outside of their own tribe.

Also it's worth noting that Edmonton ran an anti-rape campaign that solely focused on the behavior of rapists rather than their victims. While correlation doesn't necessarily mean causation, sexual assaults did fall 10 percent after the campaign. So I don't buy the idea that teaching people not to rape is a waste of time.

We're incredibly IN NEED of reminders of what constitutes rape at the established developmental levels of our education. The series Game of Thrones is getting quite a backlash for their rape scene, not necessarily because a rape occurred in a fictional narrative, but the manner that it portrayed it and then the response that the producers had once the backlash started.

Here's one article capturing it.

Jordos, if that is your understanding of the argument I'm making, perhaps you should re-read.

Minimizing your chances of being raped is a) ineffective b) puts the burden on the victim and c) essentially is saying "make sure someone else gets raped instead of me". The source of the problem is rapists, and yes it is possible to change the culture to make rape seem like a less acceptable crime and cut down on the number of rapists.

Personally, I think a lot (not most, but still a lot) of the knee-jerk reaction and false dichotomy was caused by the phrasing of the original photo:

I'm also wary of the phrasing of 'Don't Rape' since it implies that someone in the class is likely to rape somebody otherwise. Let's just go with "Rape is bad. The following is what constitutes as Rape...."

I also wonder whether society is aware of men being raped by women or other men - so it shouldn't necessarily be about Feminism or mansplaining. The same courses should be made available to both males and females.