This is Danielle Martin, a new black belt and longtime instructor out at Gracie Barra Encinitas (California.) Like many instructors, she is an ambassador for her academy and the sport, teaching groups from Girl Scout troops to corporate seminars, women's classes, self defense, and children's classes. 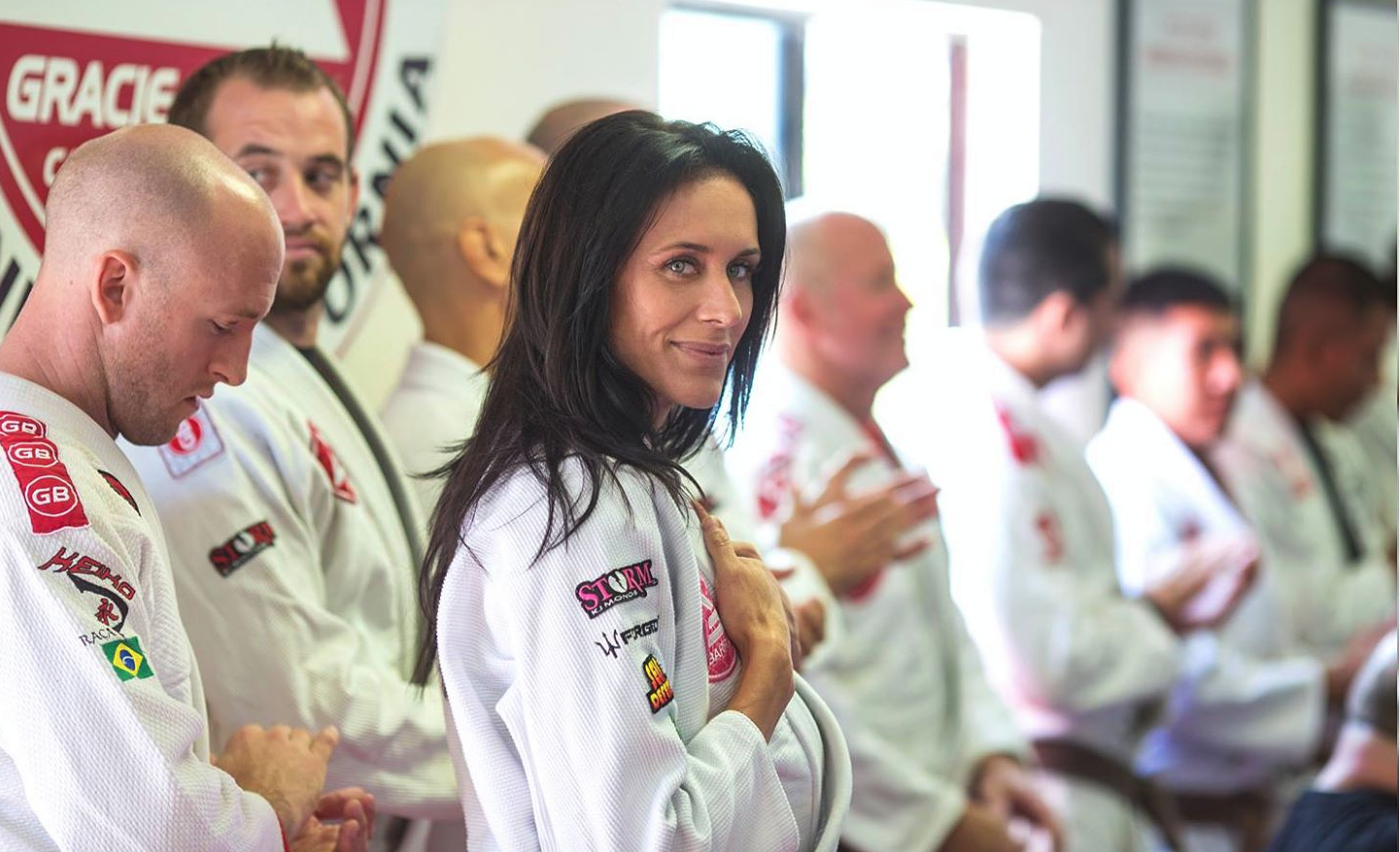 On November 15, 2014, she received her black belt.  This is an honor most jiu jitsu players dream of. 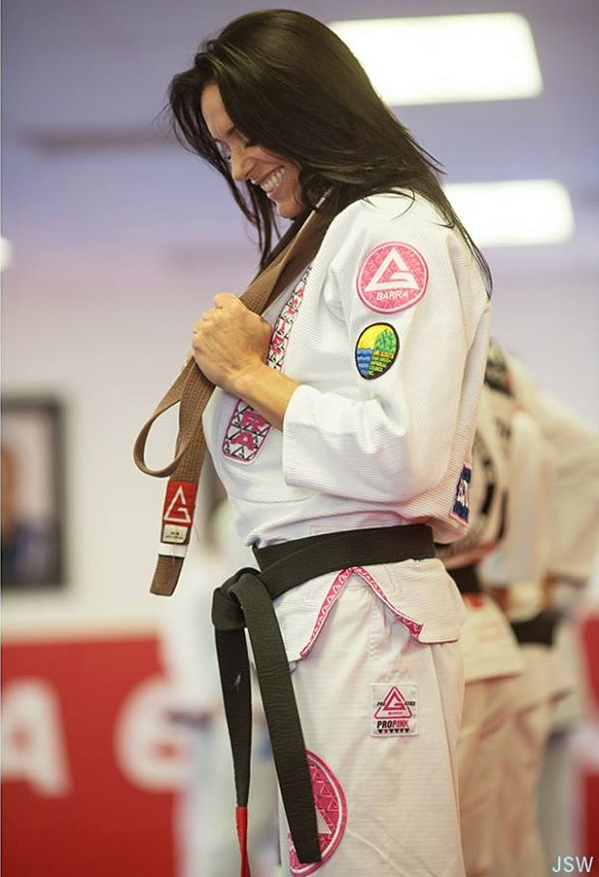 She was promoted to faixa preta by Nelson Monteiro, a 6th degree black belt with whom she used to have a romantic relationship. Her promotion to black belt was marred that night, when Monteiro also allegedly punched her in the face and head numerous times and drove off with her half in, half out of his SUV, dragging her several feet down the road. 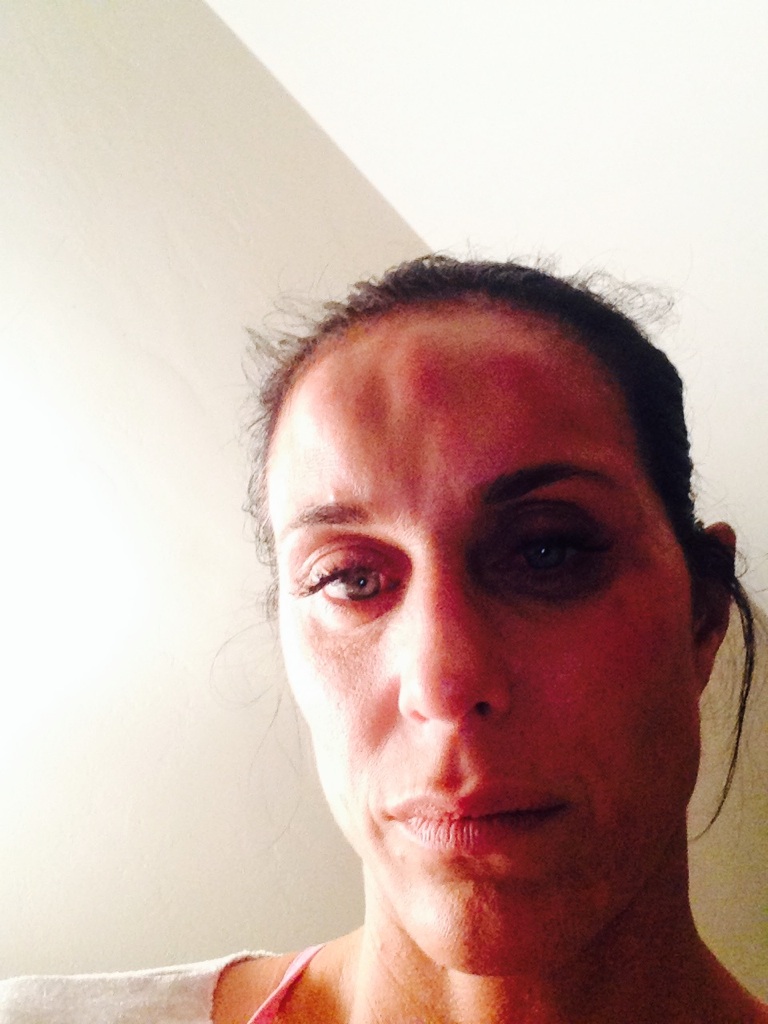 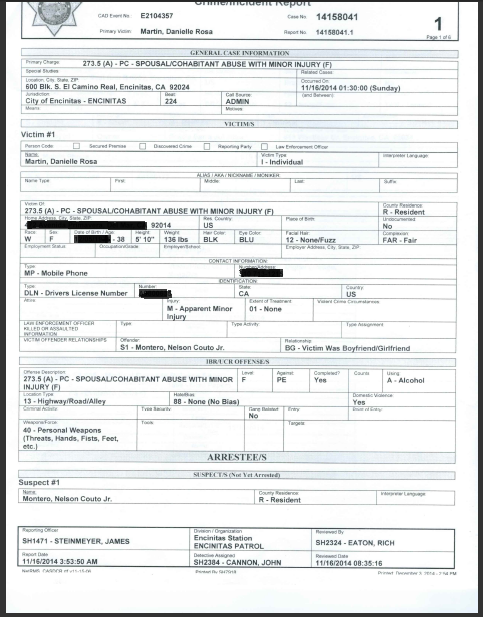 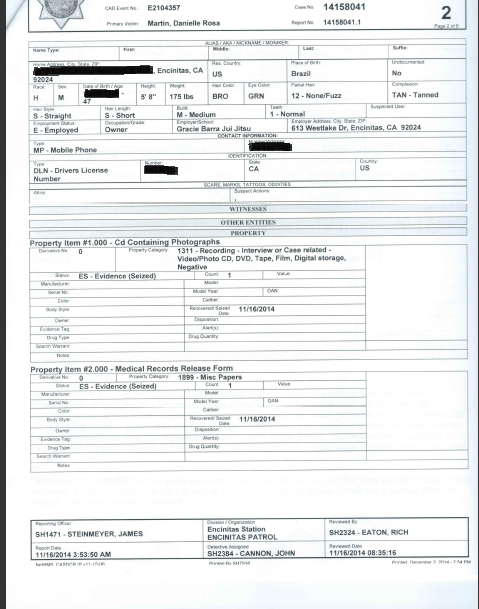 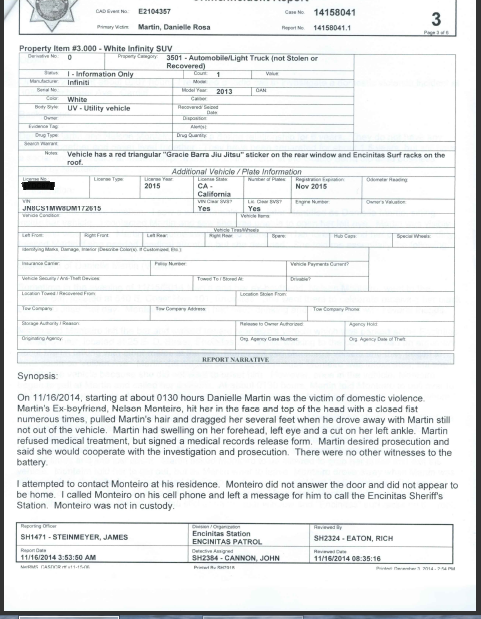 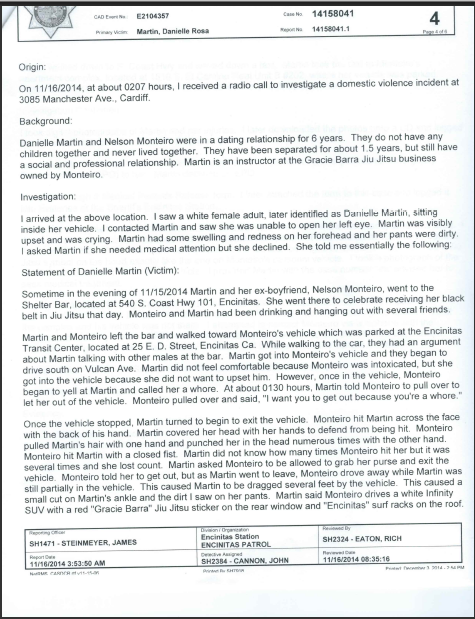 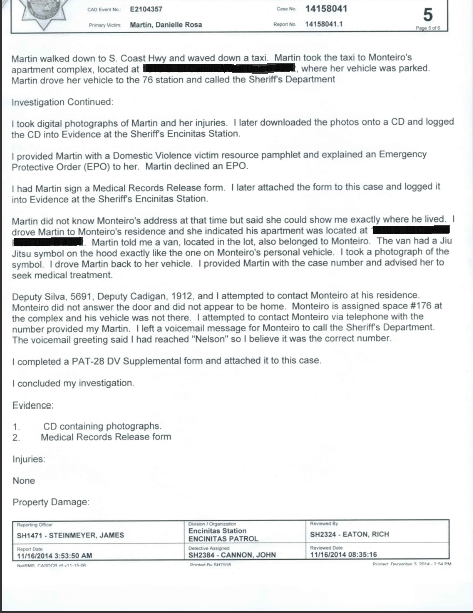 Two gentlemen friends of Martin's waited with her in the parking lot until the deputies arrived.  At least one of them has allegedly been threatened by Monteiro not to speak against him, although this has not yet been confirmed by me personally.  Because the deputies did not witness the assault, and because Monteiro avoided returning home that evening, Monteiro was not arrested at the time.  The case and photographs have been turned over to the prosecuting attorney in Encinitas (near San Diego.)

The usual process of filing criminal charges in California is outlined here.  A common misconception is that when a crime occurs that is later reported to law enforcement, police stop what they're doing and rush out to arrest right away.  In fact, many times the prosecutors will take the case to a grand jury and get indictments in felony cases, before any arrests take place.

Some days after the assault: 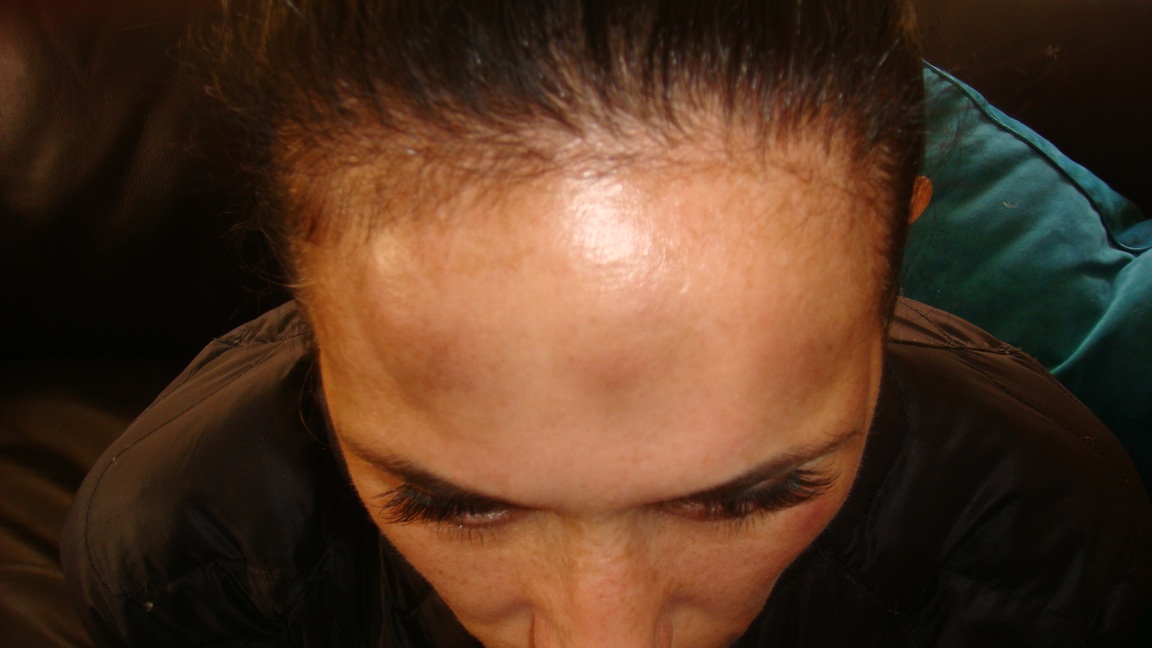 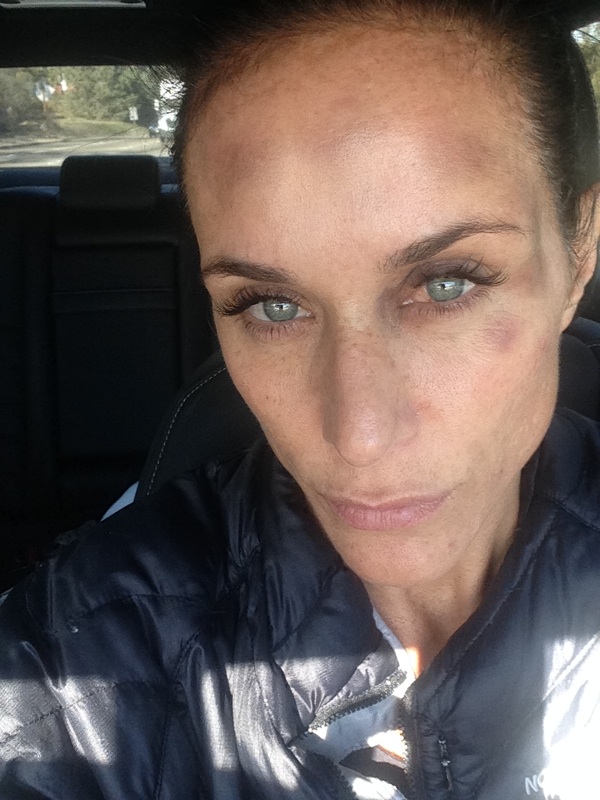 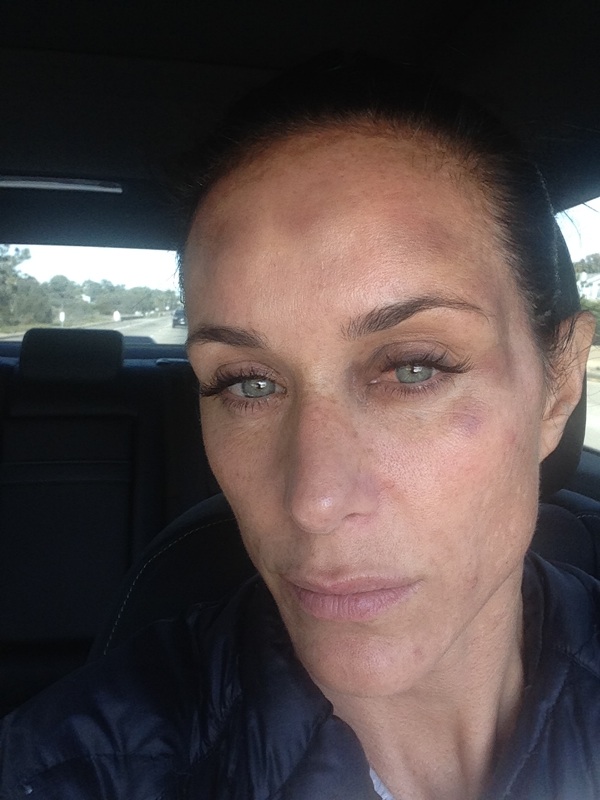 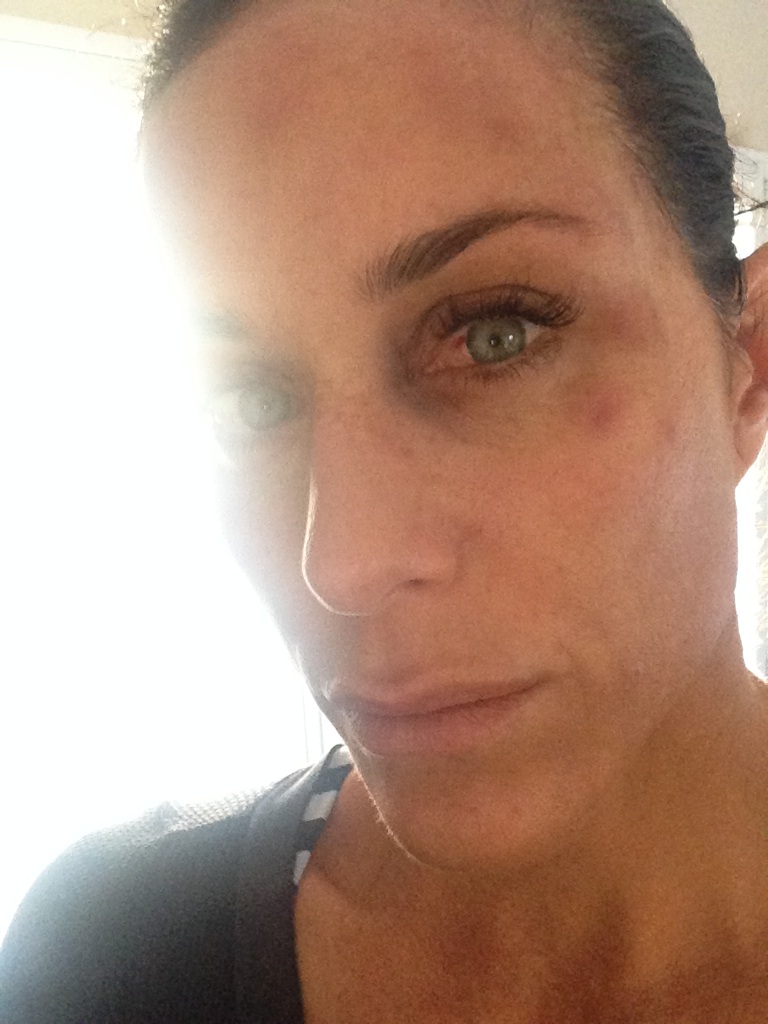 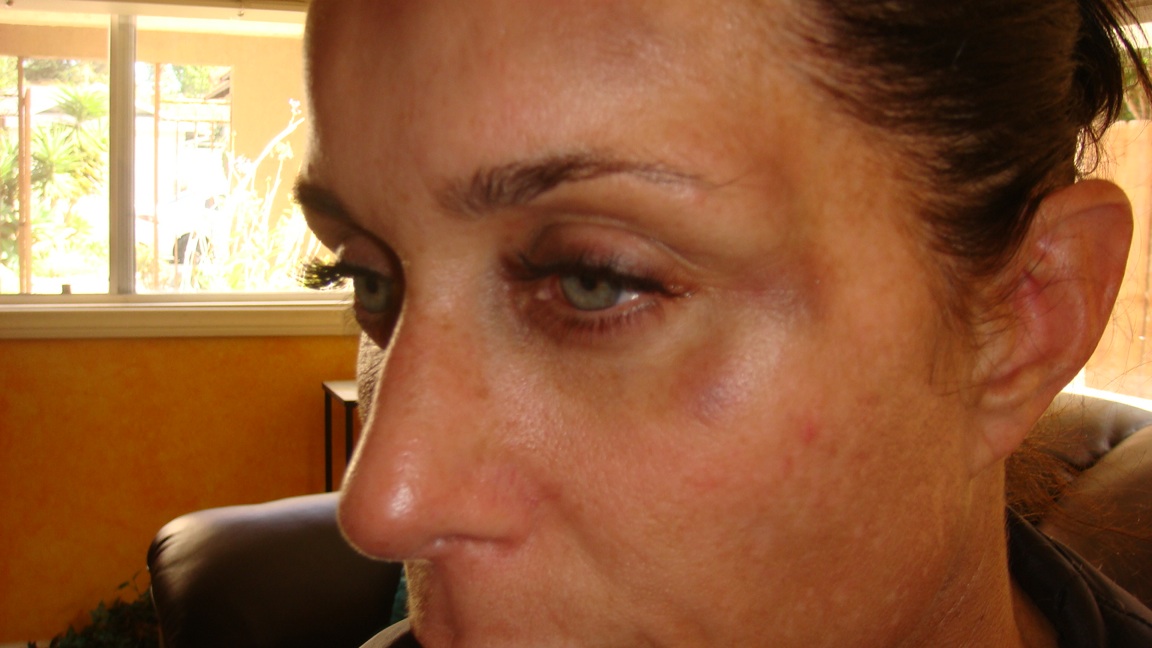 The detective on the case indicates that Monteiro claims to be the victim, and asked him through his attorney to provide photos or evidence of Monteiro being assaulted.

At this time, no such photographs or evidence have been provided to law enforcement, either by Monteiro or by his attorney, contrary to Monteiro's claims (below.)  In fact, the detective delayed filing the case with the prosecutor's office for days, waiting for any such information, but none was forthcoming.

The officer photographed Martin's hands that night, and indicates that she had no apparent marks that would be expected if she assaulted someone else.  No finger-mark or grab-type bruising on her arms. As you would imagine, her nails are so short as to be nonexistent.

in light of the recent events, we believe its best for you to cease your activities as a member of Gracie Barra Encinitas.

The school is grateful for all levels of your involvement in the past and please understand, this is not a permanent decision.

Gracie Barra
"JIU JITSU FOR EVERYONE!"
www.graciebarra.com
www.gbencinitas.com
www.gbcompnet.com
"Organized like a Team, fighting like a Family!"

But that has not been enforced.  Individuals at that academy allege that Monteiro attended both the instructors' dinner and the holiday party. (Martin did not.) Also, as mentioned above, some report that he has taken steps to encourage/intimidate people to take his side, or to remain silent if they cannot.

I've communicated with Flavio Almeida, one of the "head honchos" of Gracie Barra, about this incident.  He indicated that it was inappropriate if Monteiro was still participating in academy life, and facilitated me getting in touch with Monteiro and Ramos.

Monteiro's response to me was very polite:

Hope you are doing well. Me and Danielle Martin have very views of an incident. Please understand that at this point i do not intend to get involved in a public argument about it. I have provided information to the Sheriff's department, including photographs of  my injuries, that show that i have not done anything wrong or illegal. About the school, Rafael is sending you an e-mail soon.

Keep training, hope you get your black belt one day, best regards,

Email from the detective on the case denies that any information was provided by Monteiro or his attorney.

Ramos' reply to me was also very polite:

below is a message that i sent to Nelson and Danielle in the name of Gracie Barra Encinitas.

Until all the facts are analyzed by someone with the capacity to do so , i think everyone should stay unbiased and not take sides, since the versions are so different.

Message sent to them below:

"In light of the recent events, we believe its best for you to cease your activities as a member of Gracie Barra Encinitas.

The school is grateful for all levels of your involvement in the past and please understand, this is not a permanent decision."

Sent from my iPhone

Why, then, am I writing this post-- when, as Rafael Ramos points out, the versions of events are so different?  Should I not stay silent and wait for the courts to do their thing?

As Ferguson, Garner, and the NYE rapes in DC showed, sometimes even events on videotape do not result in criminal charges and when they do, sometimes no conviction.  The jury does not decide innocence... the jury decides whether the prosecutors have met their burden of proof beyond a reasonable doubt.  And, too, the justice system is a slow beast.

I hate thinking about a person who, like many of us, finds comfort, social support, intellectual stimulation and fun in jiu jitsu being denied those things at a time when she may need it most-- only to discover that her alleged assailant is enjoying it with the tacit approval of his business partner, and then allegedly pronouncing to all and sundry that she is a liar because he hasn't been arrested yet.  That's not how it works, and I seek to educate the people who may read this blog.

I don't pretend to know what happened the night Martin got her black belt, because (although I offered) I have not seen any photographs of alleged injuries suffered by Monteiro.  I have only seen one side of the story.  But the side I've seen so far is pretty ugly.

Looking at the offense report, we see she's a very slender 136 lbs at 5'10" tall... he's got at least forty pounds on her.  Not to mention that he is a freaking sixth-degree black belt.

A healthy, male, sixth-degree black belt in Brazilian jiu jitsu should be able to defend himself and restrain a smaller female of lesser rank without beating the crap out of her.

If I were researching a school, looking for self-defense instruction, high-level technique, or even a nice teacher, and I read this... I might have second thoughts about learning from this guy Monteiro.  I mean, really-- if you can't exercise technique and judgment sufficiently? and (assuming for argument's sake) you "had to" put goose-egg knots and a black eye and horrible bruises all over this skinny lady's face in order to "protect yourself?"  That does not make any sense to me.  MAYBE you bruise her arms trying to hold her.  Better yet, stop the car safely and tell her to get out.  If she refuses, you take the nonviolent path.  Call the cops if you have to.

But You Do Not Bash Her Head.

You Do Not Punch Her Face Repeatedly.

And You Do Not Drive Off Dragging Her On The Road.

That, of course, assumes the best possible scenario for Monteiro. I only know Martin from a brief introduction years ago at a tournament... don't know either of them well at all. I don't know if she instigated any physical contact with him, but if she did, he shouldn't have responded as the photographs reveal he did.  And if she didn't, then his conduct is a million times more reprehensible.

Gracie Barra handled the Yakima rape incident well by "excommunicating" Cristiano Oliveira when he was arrested for raping one of his juvenile students, and Gracie Barra Northwest established wonderful policies to prevent future occurrences and help deal with any that occur despite best practices.

Edited to add: According to Flavio Almeida, Gracie Barra supports survivors of violence and welcomes Martin to train and teach at another location while she waits for resolution of the case and disapproves of Monteiro being permitted to resume participation at the school. 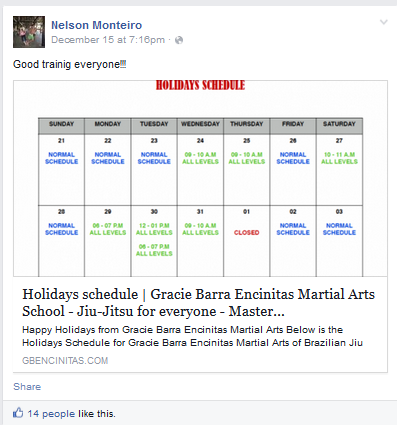 Georgette, thanks for sharing all of this information and for your continued good work! ~ Joe

Thank you so much for sharing this information. It's a shame that Danielle is being cast out of the gym while Nelson is not. Is it not reminiscent of women being blamed for their own rape? Unfortunately since Monteiro is a partner in the ownership of this gym the other owners have a greater incentive to keep him aboard. Damn, I feel so sad about this.

Thank you for posting this, Georgette. Horrible that Danielle is being punished for what was done TO her. Is there any way we can send her messages of support?

Everything you write here or on my facebook wall, she'll see at some point. If you prefer to send her something privately, message or email me and I'll get it to her. Thank you.

All of my best goes out to Martin. It seems that jiujitsu politics never favor the female (often times the victim) in these cases. Hopefully justice is served, but in the case that it is not, I hope she feels welcomed by a better school.

Thanks for sharing this kind of information. For us Brazilian jiu-Jitsu school owners is shameful that an Instructor is capable of doing that. I feel bad for Mrs Martin. Nelson Monteiro has always being a bully and Always tried to harnessed people if he can. Too bad we have this kind of instructor in our community. Please don't judge Brazilian jiu-jitsu schools by this incident. there are a lot of great schools around.

Thanks for keeping this in the public eye, G. She has m support.

Crazy, how do we keep updated on this? Is she still trying at a Gracie Barra school or has she left the team?

When there's an update, I'll post here. The DA is still investigating.

Has there been any official updates on this case?

I have read on forums charges have been dropped. As well as it was fake.

No updates. It seems charges were never filed because the prosecutor's office declined to prosecute. I do not agree that the reports of his abuse were faked, however.