A shank in the elbow, or "How not to hurt people when you visit their academy."

First things first. Check out the preemie niece and nephie! That's my husband's brother John, holding Harrison (over 7 lbs!) on the left and Ella (over 6!) on the right. Ella is still getting some assistance with her breathing, and Harrison still occasionally has some arrhythmia in his heartbeat, but overall they're both doing super well. Hopefully Harrison can come home in two weeks or so. They would have been full term in mid-March. Once Harrison comes home, life for their momma gets even tougher, as she is breastfeeding them both about every 2-3 hours, and you can't bring Harrison back into the hospital... so she'll be driving back and forth all the time just to get those kiddoes fed. Oy! 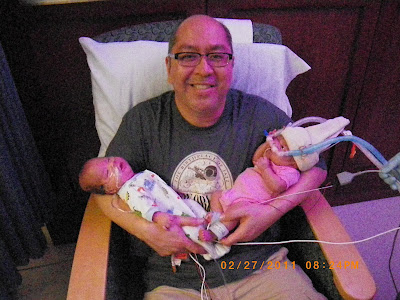 And here's momma, Ashley, with Harrison... 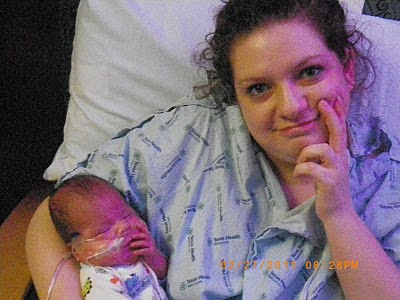 It was a good weekend but the title of course has a story to go with it. Friday I left work a little bit early to drive with my husband up to Plano for the family visit. Of course, trying to keep up my three-a-days, I worked out at the gym in the morning (stationary rowing, treadmill, kettlebells, and free weights) and then in lieu of crossfit at lunch, I rolled for 40 minutes with a visiting friend from Rigan Machado's school in LA.. he took a little time out to crush me into smithereens. The other twenty minutes or so, I was getting mount pointers from our brownbelt Josh and Daniel Moraes... and rolling (in a very loose use of the word) with another brownbelt named Ash. Really I wasn't rolling, I was just feebly giving away position after position until there wasn't anything left on the shelves to give away, not even my neck. Sigh.

With the beatings concluded, we hit the road, stopping on the way for a seminar at a sister affiliate. Daniel gives a great seminar, he's a very good instructor, and his style is a lot like mine (his top game is very heavy, very smashy.)  I was partnered up with a guy in blue jeans, with a belt (complete with metal buckle) still on, and polo shirt. Sigh.  Nonetheless, we made it through, and I had a GREAT couple rolls with my buddy Kyle, a purple belt who has that rare skill of being able to ratchet his energy and effort to match your own. Sooooo much fun to roll with and he has no problem stopping in the middle to show you something or poke you along in the right direction. Here's some video of us playing:

Then I rolled a little with a newish gal who's been training about six months-- it's so exciting to me to see more women get into this sport!

Which reminds me... Mike Calimbas recently wrote a great article on the growth of womens' BJJ in Texas and he iinterviewed many of Texas' women fighters. Check it out here on TXMMA.com.

Then, hit the road to finish our journey to Plano, stopping for a bite on the way. Normally I am not a huge fan of the food at Olive Garden. Plus my make-weight diet (lean protein, tons of veggies, minimal sweets) has been showing results (5 lbs lost in 3 days of three-a-day workouts) so I was cautious about entering the place of temptation (pasta! garlic bread! yummy salad dressing!) However, their grilled salmon with broccoli and red peppers really did the trick. YUM.

The next morning I headed out to see Peak Performance BJJ's competition team class in Keller TX.

3 other gals-- my friend Kristine, a purple belt had invited me and welcomed me with a warm hug. Pilar, a blue belt my size, a high school teacher, with beautiful eyes. Angela, another blue belt a little smaller than me. Angela works full time, is in grad school full time, teaches 2 classes a week, has two kids, and is married. And still finds time to train at all! Yikes! Anyway, after a short warmup I partnered with Angela to do some conditioning drills-- armbars and triangles from guard, then kimura situps.

Sadly... while I sat up and reached over to get the kimura, she moved forwards slightly to flick hair out of her eyes, or something... and the hardest part of my entire body (my elbow) connected with the most delicate part of hers (her eyelid)... she slumped to my chest cupping her eye. I freaked. WAY TO GO GEORGETTE! VISIT A NEW ACADEMY AND ATTACK THE POOR LADY WHO JUGGLES EVERYTHING TO MAKE TIME TO TRAIN!  I felt like I must have come into class wearing this on my sleeve: 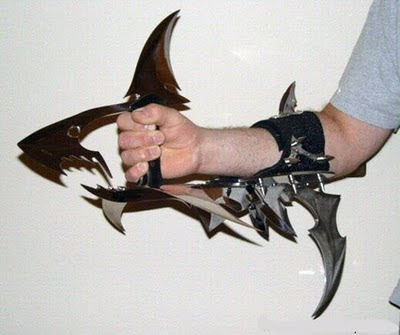 She sat up and I was shocked to see a rivulet of blood dribbling down her cheekbone. She hurried to the bathroom to clean up and I hurried to find a doghouse to hide in. Fortunately, the people at Peak are pretty cool-- they were nice about it, but they also ribbed me about it, asking if I hid a shank in my gi top or whether they should wear a hockey mask when rolling with me. Somehow, being given some shit about it made me feel better-- if they'd been totally nice and kid-glovesy with me, I would have felt more like an outsider. Anyway, Kristine and Pilar let me work in with them, on a drill that fit in very well with the situp guard sweeps Donald taught the other night in our comp class. Pilar hadn't done it before either, and it was really tough on me. Kristine called it "pole dancing." No one took off their gi though so I was happy. Angela came back in time to work with me on 3 halfguard sweeps that counter a common pass in my academy, a negative pass, and a kneebar attempt. I wasn't so good at the sweeps because they involved rolling backwards over your shoulder, AND because I was now paranoid about putting any part of my body near any part of hers. After about 15 minutes, she said her eye was THROBBING and she went home. I hunted for the doghouse again but couldn't find it. :( 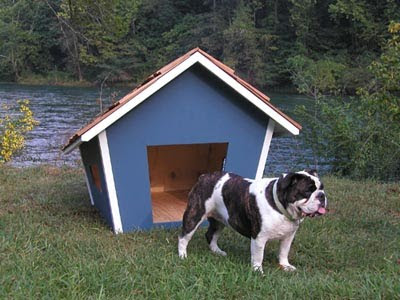 Too bad too, because I misunderstood the "gripfight wars" to be "takedown wars" like we do at home. Poor Pilar-- once I got my grips, I went for the single leg, and took her down (relatively gently!) I was all happy with successfully taking her down, until she told me it wasn't the aim of the game. Well, that explains why she didn't really resist. Can I go home now?

Anyway, once all the technique was done, we still had about 20 minutes for timed rolls. I went with Kristine first- I did so-so with the standup, but after I got taken down, she passed, side controlled, northsouthed, and mounted. I did fight back, I promise, and cleared out a path on the mats in my attempts, but no, it was no good.  I watched Pilar and Kristine next, then had Pilar last. And then class was over. No further injuries though. :)

Rest of the visit was nice... the preemies are doing so well, and we had time for dim sum just the older kids and us.. got some work done for the office, and visited the preemies again before watching UFC 127 on the computer at home. Crashed hard and woke up crack of dawn Sunday morning to drive home, because had to leave for Girls in Gis in San Antonio by 10am. Sadly, though, turns out I've lost my car keys, and couldn't drive my car out of the garage so I took Mitch's.  Girls in Gis was fun-- good techniques, good rolls with friends.

After 3 hours of that, we all ganged up on a local sushi joint, terrified the staff and ate it out of house and home like a mob of locusts. Me, Shama and Rebecca made it home to Austin just in time for a killer wrestling seminar taught by Zach Lamano at our academy. (He's visiting from Jersey, to train one of our UFC fighters Yves Edwards.) I lucked out and partnered up with Donald. We worked double legs (with Zach's different and interesting shot) and Russians and duckunders and backtakes and inside control setups and wrist grab counters. It was warm and humid and I completely SOAKED THROUGH my tiedye gi pants and Mickey Mouse tshirt. After two hours of that, I was a little tired. It was 8:30pm when I got home and a quick shower saw me straight into the sack.

Today-- no morning training. Crossfit at lunch, then maybe a little open mat at the academy before a meeting back in the office at 2. Class tonight, more Daniel Moraes, and a private with Daniel at 8:30pm. Tomorrow morning, another private, with Donald. Tomorrow's a 3-fer, but competition class has been rescheduled this week only for Thursday night.

Hope you have a great day... :) Train hard!! Pan is just barely four weeks out!

Wow! I am tired just reading about all of your travels! So much fun! I would feel nervous visiting new schools and not knowing what the status quo is. But I think it is awesome that you get to meet and roll with so many people.