Jiu jitsu doesn't get any better and neither do you.

Wow, that sounds so negative.  I don't mean it to be. 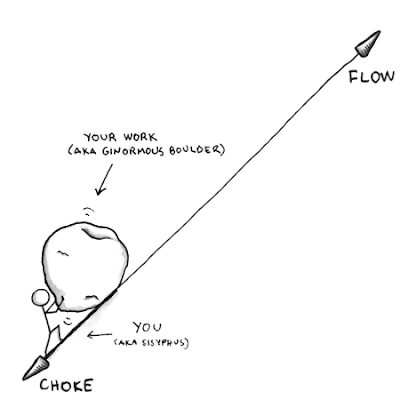 What I mean, in non-sound-bite speak, is this.  (Take with a grain of salt; I've been a blue belt for four+ years so I'm no expert.)

I mean that beginners are often told that "it gets better!"  I heard that all the time.  I catch myself saying it to whitebelts especially when they're looking down at the mouth.  I think I feel guilty after mashing whitebelts.  I feel guilty because I know it can be miserable getting mashed all the time (welcome to my life) and then when they see a small female bluebelt next in the rotation.. there have to be some moments of hope there.  In fact I even tell lots of whitebelts that I'm the next rung on the ladder for them... I'm the first bluebelt they'll tap out or positionally dominate.  It's one of my roles in the academy, I think.  I'm sort of low hanging fruit (in a good way.)

But I tell them it gets better because I want them to have hope and I want them to persist.  There's a girl I'm specifically thinking of... I am so excited every time I see her in the academy, because she is such a disciplined, determined student.. she works full time and not an easy schedule, but she always makes time to train, and I see her improving (physically, mentally, and jiu jitsu-ally, if that makes sense.)  And seriously, when we do positional sparring together, I have a VERY hard time with her, because she's much bigger than I am.  So I want her to have some pride that I have to exert myself fully just to be even with her.

BUT, here's my experience.  No matter how much I'm told that it gets better and I'll get better, I rarely feel it.  On an intellectual level, I am sure I have improved a little bit since I started.  On occasion I torture myself  by watching old competition videos, and I cringe because I see so many mistakes, and I fervently hope I wouldn't repeat them now.  At least I can identify them as mistakes!

But I don't FEEL any better when I'm training.  I still have lots of rolls where I feel just as inept, ignorant, uncoordinated, frustrated, smashed, and unable.  I have lots of rolls where I despair of ever making progress.  My pathetic little belt is a freaking LIAR because it's ratty and implies I am a senior blue ready for purple.  When I compare myself to my peers (and people who have been training even less) I know I have a long way to go.  Frankly I could care less about the belt color.  No, seriously, for reals.  I'm not competing so it has really no relevance for me.

Under it all I know that the feeling of standing still, not improving, is an illusion created by the simultaneous improvement of my training partners.  But as that is the way of the world, it means that my title is semi-accurate-- it doesn't ever feel easier, and you won't feel like you're improving.

It would probably be easier if there was a way for six-months-ago you or one-year-ago-you to come into the academy every once in a while so you could really mess them up in a roll.

As a wise (and very fast) man once said about bicycle racing, "It never gets easier, you just go faster." It's amazing how many aspects of life that saying applies too -- especially if you're willing to switch the last word around.

Yeah, I agree completely, especially when you say "I still have lots of rolls where I feel just as inept, ignorant, uncoordinated, frustrated, smashed, and unable. I have lots of rolls where I despair of ever making progress." Even seven years down the line, there are still many, many times where I spend the whole roll struggling to escape from under side control and/or flailing to get someone off my back.

Although I'd probably phrase it a bit less harshly: maybe "improvement in jiu jitsu is so slow that you often don't realise it's happening"? ;p