I'm a Leo. I don't really believe much about astrology but as I was writing this post I thought I'd see what the internets had to say about them. AstrologyWeekly.com said, in part:

"You are a born leader, and you know it. You are blessed with many talents, and a destiny for greatness. The sun is a star; you, then, are the star of the zodiac. Because of this, you are eternally optimistic and cheerful. If something gets in your way, you conquer it, the way a lion will defeat virtually any foe in the jungle. And like a lion, you do so with dignity.
. . .
Like a cat, you are a hunter. You spot your prey, take aim, and pounce on your target. In human terms, this means your ambition is highly focused.

You know you will reach the top; it's just a question of when. Along the way, you are highly organized, frank, and outspoken—all qualities which focus on your target of being the leader."

Keeping that in mind... then I read David Penn's blog Side Control...

Even though I probably could have stood up with Hardy - it's mathematic (sic). If I were to stand up with Hardy, even though I think, I believe my standup is superior, it would have been a risk because that's his main asset. If I go to the ground then I know my ground is much better than his. So it was smarter for me to go on the ground and take the fight (to) where he is the weakest.

I think this is an excellent explication of what I was trying to say a couple days or weeks ago... I wonder about my opponents' strengths for that reason. I am no purist seeking to prove myself worthy in a ritual sense; I want to pounce, to rend, to tear... to take those girls OUT in a way that, as Mia Hamm says, will make them not want to see me (on the mats) again.

In the past I've said I will not be a hedgehog, I will be the wildcat. 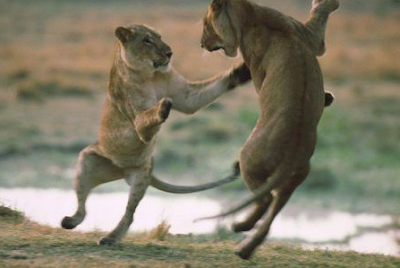 You are ready. Go draw blood and tear limbs.