I'm just jamming this out in the few minutes before Mitch and I leave my girlfriend's house in Orange CA to head back to the Pan... what an experience so far! My head is whirling with ideas and plans and reflections and most of all, motivation.

Short version, in case you're not following me on Twitter (how does that work exactly? I am unclear) or on facebook... because I haven't figured out how to blog on my cell phone...

I lost my first match (only match!) Tall blonde girl from Alliance named Nina Beeson. I will post video later, but the summary is she was very mellow, I batted away her first 2-3 attempts at getting a grip, she fell to guard and I landed knee up, so it became primarily an open guard battle. At one point she did catch me in a triangle, but I fought out of it. The dadgum mats (as Christy warned me!) were INCREDIBLY slippery and I had a very hard time passing her guard, which seemed to me at the time to be some kind of inverted thing. Anyway, ultimately, the score was 0-0, we each had an advantage (she for the near tri, me for near guard pass) and the ref had to decide. I also thought it was the fastest 6 minutes of my entire life, at the time I was really focused on keeping base and controlling her hips as best I could and time seemed slooooooooooow. Kudoes to Ian, a blue belt from my academy, who got up bright and early to come corner me. Unfortunately his comments were drowned out by the loud voice of my opponent's corners and cheering section... but I could at least listen to their instructions for clues on what she would do next! :)

Bailed on my absolute, stomach was upset (not used to eating food! LOL)

Here's Shama, our purple belt, who tied for 3rd place in featherweight adult purples.. last year she was the super feather champion :) 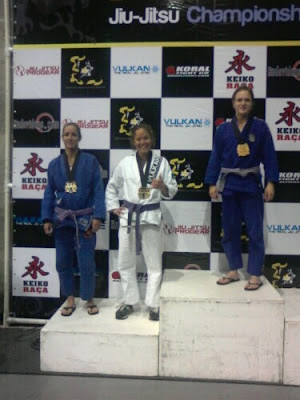 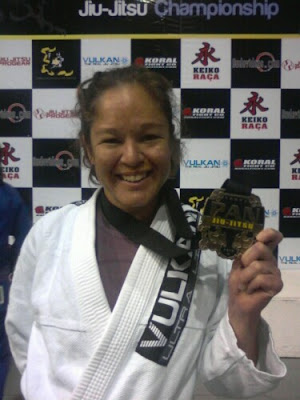 And for grins, here's what the world looks like from my scoring table. One of these girls, Jill Baker, is from Texas (met her at the Atama Open in 2008, my second tournament) and I loaned her my spare gi because the officials didn't like the quilted texture of her gi top (it has to be woven!) She's only 6" taller than me... and wears an A2! But I had a spare F3 and so we stretched the sleeves and she low-ridered the pants and got on the mats :) LOL-- the "Fueled by Fear" patch is showing up all over! Prolly can't see it in this picture but my husband took some with a better camera so we'll see. 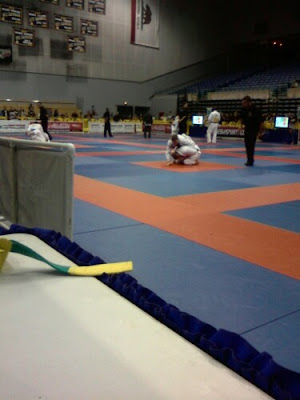 OMG! That's great! You played the strategy!!! Excellent. Well done Georgette. You will win the PanAms. It will happen. I'm so proud of you.

Congrats on getting out there!! You went further than most people ever go. Can't wait to see the videos.

Glad you're having a good time. :)

It was so awesome to finally meet you. I'm sorry we couldn't stick around. I'm so proud of you for making the decision to do it, though. I don't think you would be able to stand it if you had backed out. The truth is, you stepped up to the challenge, and, let's be honest here, you came away with a tie - an advantage isn't a win. Congratulations for that! Now you know what you need to work for worlds! :)