On Saturday June 19, Leticia Ribeiro put on an incredible 3 1/2 hour seminar in gi techniques for the ladies of Texas... thanks to Triin Seppel, the Fenom Project, and Rob Ables, who runs the Marcelo Garcia affiliate in Dallas (Tiny Killer Robot Jiu Jitsu, isn't that awesome?) And these pictures are all by Jen Sulak, unless I say otherwise. 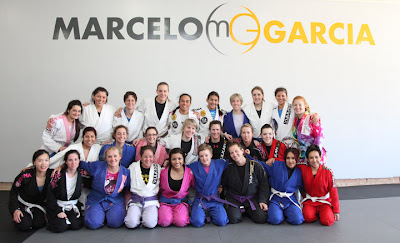 Leila, another blue belt at my academy, joined me for the 3 hour drive to Dallas which went quickly as we gabbed the whole way up. We arrived a little early, so we snacked in the parking lot before heading inside. Shama, our purple, was in town for the seminar already, and Christy, our academy co-owner, arrived just in time.

We had a great turn out, from white belts all the way up to a 3 stripe brown. Leticia brought along her protege, 4 stripe faixa marron Beatriz "Bia" Mesquita, and both ladies were very warm, approachable and happy to help.

Triin thoughtfully provided a huge cooler full of bottled water on ice, as it was a little toasty just like our academy back home. When Leticia walked in, the first thing I thought was "damn, she's got guns." Sleek, cut, defined, and extremely muscular, Leticia looks intimidatingly strong. She was all business too, for the most part, but she took the time before beginning the seminar to walk around the room and shake everyone's hand and thank them for coming. 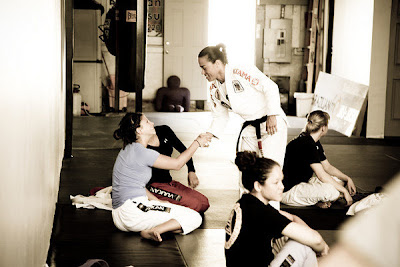 She introduced herself and Bia, explaining that she loves "zhu zhits'" and that she's been training 17 years! And it was quite endearing to hear her say she lives for jiu jitsu. Once or twice she apologized for her English but she's quite fluent, although retaining the charming accent. 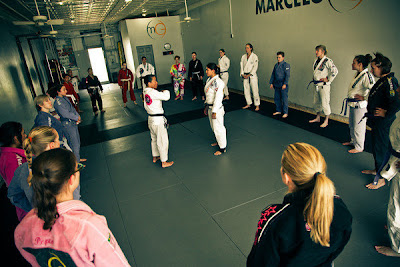 Texas in June is plenty warm to do without a warmup, so we jumped right into technique, beginning with some thoughts on standup and grip defense. We moved along at a good pace from defending grips at the start, to grip breaks, like this one: 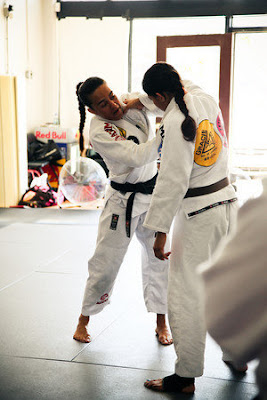 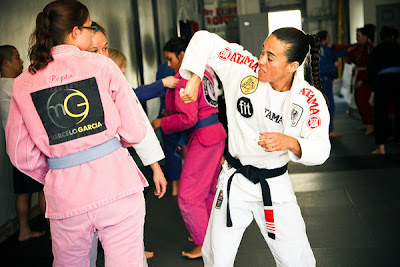 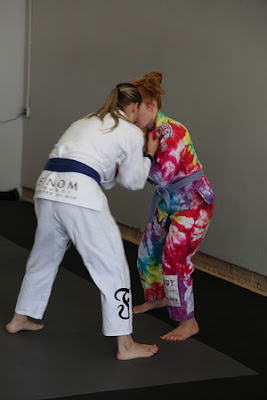 Then Leticia covered getting your own grips and then a variation of a Russian into a possible standing armbar and from there to a nice arm triangle, the counter, and a recounter. 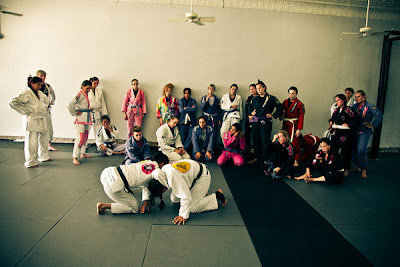 You can tell Leticia is a very practiced, experienced instructor, because the first explanation had an adequate level of detail without going overboard, and then after a few run-throughs, she reconvened the group to address the next layer of complexity. She also emphasized things in order of priority, so your brain was filled first with the more important bits.

The remainder of class was focused on ground techniques, beginning with full guard. We covered a high lock guard attack series. If I told you "armbar, omoplata, triangle" you'd think it was just like class back home, and you'd be right... and wrong. The devil's in the details. It's nice to hear from a 3 stripe black belt that yes, locking in even a loose-lock triangle is hard!!! (I'm so tired of hearing people act like it's not. Maybe if you have hamstrings like Christmas hams...) Leticia's comments and Triin's patience as uke were great help to me. 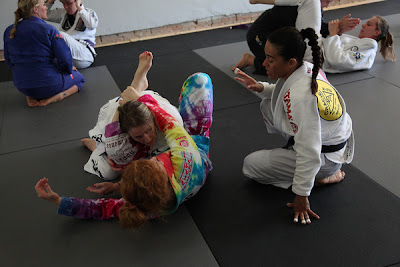 And better than hearing it's hard is hearing how to make it happen anyway, with little grips here and there! (Secret, secret... until I try it on you!) 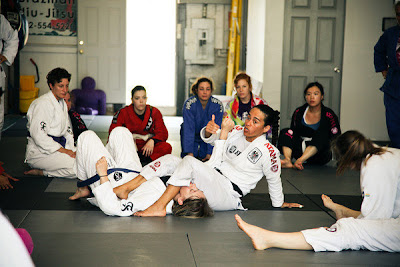 Leticia addressed some specifics with the omoplata as well, such as what to do before you try to sit up and finish it, how to make their counters go away, and how to capitalize on their momentum and sweep them in a way I had never seen before. Of course, being the uncoordinated one, I needed some special assistance from my drilling partner Triin and from Bia, but eventually I got it. 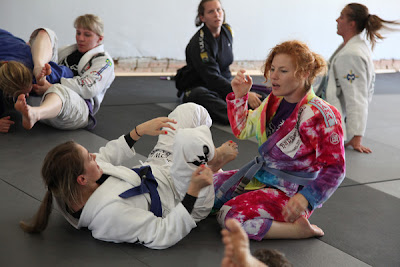 It's hard to believe Bia is only 19. And she was just a purple at last year's Pan! Leticia pointed out that Bia had chokes demonstrated on her so frequently during their European seminar tour, she lost her voice, and apologized with a smile and a chuckle.

Leticia and Bia circulated throughout the class of 24 women, frequently doing the techniques with us and having us do it to them to feel our pressure and positioning. We moved on from full guard to half, discussing some really nice pass techniques-- an easier way to flatten people out that doesn't load their thigh for a sweep; head pressure; a double lapel grip counter to knee in "da hippie bone." Here's Triin passing me... 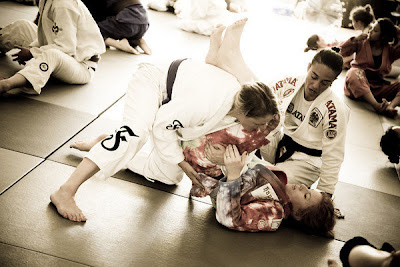 She demonstrated some of these on me and her pressure is AMAZING. I couldn't believe such a little person could make me feel so smashed! (And I need to find out what dryer sheets she uses because while she smashed on me, I still noted how fresh she smelled.) And finally, deep half guard! 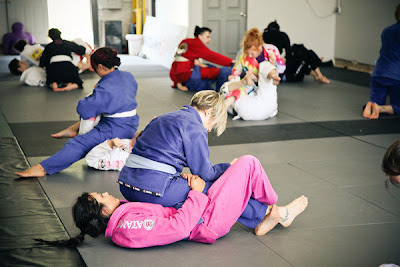 How to prevent it, how to defend it once they get it, how to pass it to side control or to a kneebar if you want.

A few girls had babysitter time constraints so we shot the group picture before they departed, but it was apparent Leticia had even more techniques she wanted to share. We'll have to wait for next time, sadly, though she was very generous with answering questions and even asked Leila to roll. I was jealous! Christy, our brown belt, rolled with Bia at the same time, and Shama was on the mats too, so I grabbed Shama's camera and took some photos after I had a few rolls with a visiting blue belt, Tiffany Skach, myself. Here's Christy on the right, chatting with Leticia... 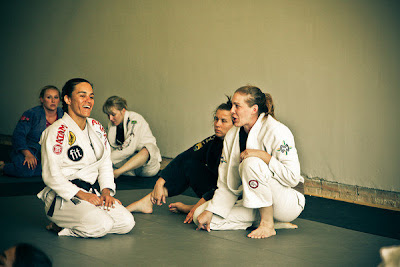 Unfortunately the closest I got to rolling with either of these ladies: 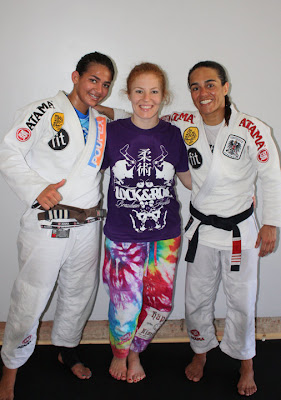 The tshirt, by the way, is by Scramble and Manto and you can get one for yourself here.

Around 4pm, we called it quits and meandered to the Thai restaurant next door for some chow before hitting the road again. Got home around 8:40pm.

I highly recommend a Leticia seminar if you get the opportunity.

And as a side note: Triin was wearing the new Fenom gi-- the Lotus-- and it was VELVETY soft to the hand. But this has the strange side effect of being nearly impossible to keep a grip on it! I'm serious, we were drilling a technique where you're supposed to have failed a grip break first-- and each time, my grip was breaking where it wasn't supposed to! Triin kept looking at me like "come on, hold it tight!" But I literally was sliding off the damn thing. I think I need to look into adding to the collection ;)

"(And I need to find out what dryer sheets she uses because while she smashed on me, I still noted how fresh she smelled.)"

One of my instructors has been telling me to watch Leticia, that I need to work on pressure like she has.

I'm jealous. And your Happy Gi stands out in the photos like crazy!

Leticia is a legend, you sound like you y'all had an amazing time. Well done.

I wanna be Leticia when I grow up.

Thanks Charles-- the gi was so much fun. Leticia seemed to like it (?) but then pointed out that Royler was very traditional, only permitted blue and white gis in his classes, and actually frowns on blue.

I told her that some people at my school weren't crazy about the tiedye either! :) Christy pointedly asked me how many gis I have now-- I said about 15-- Leticia said well, if you train 2-3 times a day... and someone said yes, she does. So I felt justified :)

Silly question: How do you pronounce Triin's name?