Vieira is known for, among other things, his smashy top game (me likes!) and I knew Master Pereira from observing him referee at IBJJF tournaments. He's also a judo black belt. I came hoping to bring home details to make basic elements of jiu jitsu even more compelling. I wanted some "aha!" moments born out of that heartfelt appreciation for simplicity and elegance. While my blood fizzes for a nice flying armbar or any flippy spinny inverted sweepy thing, I know I probably won't see much grow in my garden from those seeds. I need seeds of solid basics-- the sunflowers of the jiu jitsu garden, instead of orchids.

Sadly (yes! I know! the music of doom and despair when you read a tournament review that has anything like "sadly" in it!)... I realized what a problem the language barrier can be for a baby grappler. So there were plenty of sunflowers, but I don't think I caught many seeds because I didn't understand as much as I would have liked.

I need to learn Portuguese, clearly. And if I had been a more experienced grappler, I would have had the educated eyes it takes to just see the little details, in action. Identification is the first step on the path to execution and incorporation. I know Rodolfo and Julio were talking up a storm, and observing their movements was definitely wonderful... but I just KNOW I missed a lot. And that makes me sad.

However, it was nice to see a big bunch of blackbelts on the mat, and several of them did their best to translate. (Had a few problems, like using the words "head" and "hand" interchangeably, but it wasn't impenetrable.) I liked finding out that in a general sense, I have seen a lot of the same things I am pretty sure Rodolfo was teaching. I think I would have had a much harder time following and executing if it was all new to me. I had some personal attention from Rodolfo, who did a technique on me and critiqued my execution when I did it to my partner-- it was like a 2 minute private. I had a great time with my drilling partner, a cool cat named Beau (sp?) from San Antonio, and it was nice to meet a blue belt gal from Brazil named Beatriz. I got to meet Ben A. and his baby daughter from Ethiopia face to face finally! and another nice guy named Andrew. Hung out with Tara for a bit. And I had a lot of help from blackbelts like Igor, Jean-Claude, and another dude whose name I didn't catch, so I definitely felt like I was moving in the right direction. 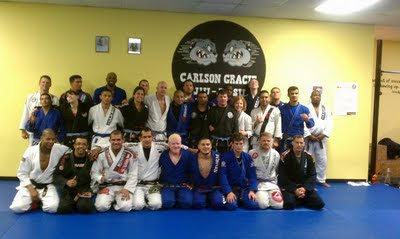 Here's basically what was taught:

* standing pass of open guard to knee on belly
* toreador pass of spider guard to KOB
* standing pass of sitting guard to half guard, then to side control
* two variations on a halfguard pass
* passing the halfguard where they have their knee in your hip (a Rafa Mendes pass I learned from Hillary Williams in a private, woot!)
* baseball bat choke from KOB
* butterfly guard offense- a sweep with wrist control, a back take, and transition to X guard sweep/takedown
* seoi nage and a foot sweep/trip
* and a couple thoughts on maximizing points in tournaments, thanks to an uncommon emphasis on understanding tournament rules and how points are accrued, which influences your strategy when in a sport jiu jitsu context. I LOVED this part, and I think this kind of information is invaluable for a competitor. 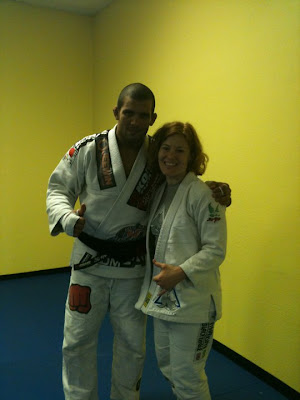 All in all a good time and worth the drive. Oh, and how sweet-- one of the gals from Carlson Gracie who didn't take the seminar made "American-style" acai bowls for us as we left! mmm... chocolate ice cream, granola, and nana slices...

For learning Portuguese, check the the Pimsleur programs from the library. Look for it to be called Pimsleur's Portuguese (Brazilian): The Complete Course.

Our library had all sets. 90 days worth of lesson (30 hour each day). It is all auditory and I listen to it on the way to work, then repeat the same one on the way home. It's not a course that does repetition, they teach you a word or phrase and then ask you questions an you have to come up with the answer first. Just like as it would be in real life.

Man! I still would have wanted to go, but I can understand where you're coming from... I can see how i would have more questions after the seminar than I thought I had going in. at least you got your belt signed and a pic! Would you say your experience was worth the money? did you get more bang for your buck with the private with Hillary?

Definitely worth the money, I did get a lot out of it. I don't like to make comparisons of one instructor vs another. Hillary is one of the BEST instructors I've ever experienced, and not just limiting that to my jiu jitsu instructors- but of everyone I've learned from in many different activities.

I second Pimsleur. Portuguese will be the 4th language I've used it for and I can't say enough good things about it.

I third Pimsleur. I've done just the basic courses for Portuguese, but the teaching style is very effective. It was great meeting you at the Leticia Ribeiro seminar on Sunday. We had an amazing time. :)

Actually, Mike, Pimsleur IS teaching through the audio-lingual method, which is a listen and repeat approach to language teaching. NEARLY ANY "learn XYZ language in your car" or mp3s by their nature are audio-lingual--listen and repeat. Their goal is to create good habits. Good language habits. They want you to respond correctly out of habit, have good pronunciation, and in general give you a sentence structure that can be used interchangeably with newer vocabulary.

It's NOT ineffective. It also tries to be a bit more interactive with the listener, but ultimately it is definitely a listen/repeat/translate/respond course. I went through the Russian to work on smoothing out some of my pronunciation.

I completely understand what you were saying about needing to speak the instructor's language. I wrote that blog post about being the foreigner in class. You DEFINITELY miss out on rationale and overhearing them correct other students, and have to rely heavily on visual cues. It's tough!

Since your interested in martial art then check out my blog for a sec. My blog is about self defense techniques it's Thor Securitys Thanks! I love jiu jitsu BTW lol.

Kick the spam off.

@Anonymous-- yeah, I considered it. But his blog obviously isn't making him any money, it doesn't look like a professional kind of "this is my livelihood" thing-- so I decided to leave it up.