Coming back from hiatus...

So, the trial in Houston went well, except that (due to unforeseen circumstances) the judge had to adjourn us early, so we will go back at the end of May to finish presenting the evidence.  It's a good thing, because I can always use more time to prepare and improve our presentation.  It's a bad thing, because it means more weeks of 10-12 hour days.  Of course some small fires started burning while I was gone and I have been hopping trying to put them out ever since.  I love what I do, it's always challenging and almost-always enjoyable.  I'm lucky.

Another plus, I am back in the gym.  I actually got in the hotel gym 3 of the 4 days we were gone.  And I went back the day after we returned, and have only taken Sunday off.  I am also back on the mats at the academy.  Frankly I was a little scared to go back-- being all fat and fudgy-feeling-- because I know how much information is packed into each class.  It's not like my experiences elsewhere, where any class is likely to be completely unconnected to the class before or after.  It's more like learning a foreign language, and if you miss a day (or worse, 3 weeks like me) you come in and you missed entire verbs, and tenses, not to mention the vocab.  That was me on Saturday.  However, our curricula are scheduled on a monthly basis, so weeks 1-3 are learning new stuff on a given subject, and week 4 is review.  And in any given week, two days are "install" and Saturdays are review.  It's just a bummer that I'm back on a "first week" instead of the fourth.

It's kind of sad how my mind works-- when I cannot attend class and I miss all kinds of good stuff, it almost deters me from going back when I *can* attend, because I know catching up is nearly impossible.  I just have to recognize that a little is better than nothing, jiu jitsu will always be there, and if I don't learn it this month, I will surely learn it another month.  It's not as though there's a deadline and whatever I haven't learned by then will be lost forever.  Jiu jitsu is forever, or at least as long as I'm alive and physically moving my body.  But it still sucks-- there are some people I used to be reasonably sure I could overcome (because they'd been training two years less than me for example) but dammit, they're catching up or surpassing me.  When you take time off, you come back and have to mentally reorder your lists, you know?  People With Whom You Must Play Your A-Game... People With Whom You Must Be On The Defensive... People With Whom You Can Experiment And Try New Things... People You Must Be Gentle With Because You Don't Want To Overly Crush Them Spiritually Or Otherwise.  I feel like I basically took 9 months or more off, and now I need to be really defensive and not assume anything with everyone all over again.

Mitch and I celebrated our fourth anniversary last week-- very low key, just a homemade meal (from me) and a gorgeous bouquet (from him) 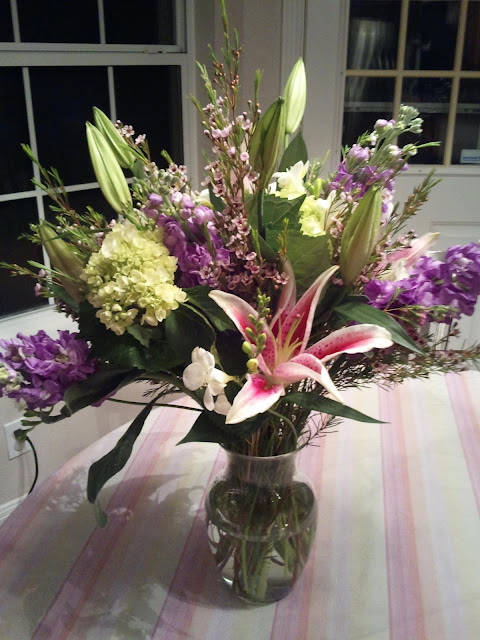 -- so we're on to year five now!  And we attended our friend Zade's wedding last night -- Merna made a beautiful bride.  Sadly had to miss one of my best friends, Janet's, wedding on Saturday in Virginia.  I wish funds were unlimited!

And then May 6 I leave for Vegas.  No, not for partying, gambling, and whatnot... for the first cycle of our IVF journey.  I've been stabbing myself in the stomach every morning, injecting minute quantities of potent hormones, and the plan is to harvest a basketful of ripe healthy eggs around the 10th-11th.  Add Mitch's swimmers, create (hopefully) a bunch of embryos, and take one cell from each (they won't know the difference at that early stage.)  When they get to "blast" stage (day 5) they get fast-frozen ("vitrified").  The individual cells get individually vitrified too.  Rinse, repeat in July, and rinse, repeat in September.  With the goal of having a lot of blasts on ice.  Then, genetic testing on each of the single cells... and voila, you know which embryos are chromosomally normal.  The abnormal ones would not make a viable pregnancy anyway, so you avoid the agony of miscarriage so many IVF couples go through-- if you spend all that money, you want to only put back the embryos that will make a healthy pregnancy!  And "banking" the embryos this way saves money (the genetic testing costs the same whether you do it to one cell or ten) and you (hopefully) have a sibling or three on ice for future use.  So, sometime around May 20th we'll know how the first "batch" went.

The nicest thing about going to Vegas is staying with my inlaws.  It will be great family time.  I hope I'm feeling well enough to train while I'm there, too... I hear some stories about feeling uncomfortable and bloated when you're essentially a giant egg factory, so we'll see.  And another good thing, I will be churning out a bunch of reviews just like I did at Christmas. :)

A nice video from Stephan Kesting on 10 ways to finish the armbar.... have a great Monday!

The video, JC likey. Glad you are well, buddy! Keep your butt in that gym! :)

Congrats on 4 years, and good luck with your eggs!