I love grain salads especially ones with quinoa. Quinoa is highly appreciated for its nutritional value, as its protein content is very high (12%–18%). Unlike wheat or rice (which are low in lysine), quinoa contains a balanced set of essential amino acids for humans, making it an unusually complete protein source among plant foods. It is a good source of dietary fiber and phosphorus and is high in magnesium and iron. Quinoa is gluten-free and considered easy to digest. Because of all these characteristics, quinoa is being considered a possible crop in NASA's Controlled Ecological Life Support System for long-duration manned spaceflights. 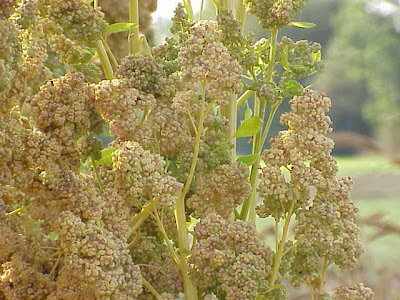 For those of us with migraines, try adding quinoa to your diet. Its magnesium helps relax blood vessels, preventing the constriction and rebound dilation characteristic of migraines. Increased intake of magnesium has been shown to be related to a reduced frequency of headache episodes reported by migraine sufferers. Quinoa is also a good source of riboflavin, which is necessary for proper energy production within cells. Riboflavin (also called vitamin B2) has been shown to help reduce the frequency of attacks in migraine sufferers, most likely by improving the energy metabolism within their brain and muscle cells. 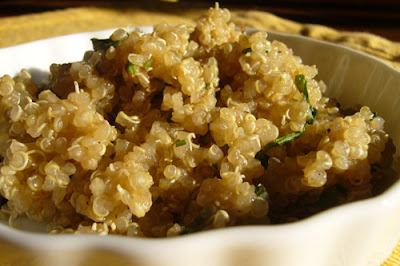 Anyway, it's easy to cook, just like rice, on stovetop or in a rice cooker (two parts liquid to one part grain; cook around 14-18 minutes, covered, at a steady but low simmer). You can cook it in water or in chicken stock, and it makes a great breakfast porridge with some honey or slivered almonds.

Here's my Greek quinoa salad, good warm or cold. Proportions are up to you!

Mix in with cooked quinoa and sprinkle with dressing, stir, taste, add more dressing as needed.

When taking a break from beating up people, this may be of interest to you. Then again -- maybe not. :)

Feel free to delete. People are just tired of the lies of a murderer:

Thanks Anonymous, that is interesting indeed.

my many faces said...

Awesome. Georgette, we have to hang out if I come to TX seriously. Or u come to MD/DC whichever happens 1st