Another great Girls in Gis open mat this Sunday afternoon-- and though I missed the Renzo/Sperry superfight to attend, it was worth it.
We had a surprising number of upper belts in attendance-- three brownbelts, at least two purples, and then a horde of blues and whites. (Including three ladies who have been training 3 weeks, 1 week, and only 2 classes!)

This is Gabriela Mueller on the left who, with her husband, runs Team Gacho Jiu Jitsu (Macaco/Chute Boxe) in Spring, TX, and my instructor, Christy Thomas, on the right.  (All photos courtesy of my sweet husband, who came for the last couple minutes because he wanted lunch!) 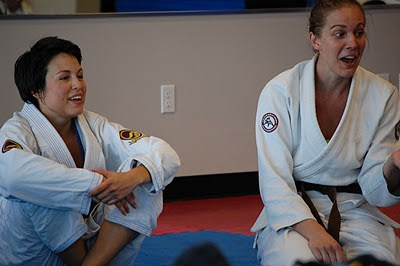 Many thanks to the host school, Sean Cooper's Trainers Elite MMA for opening their doors to the group (this is where my husband trains, by the way!) and to their resident "head lady in charge" Helen, for running the warmup and teaching some techniques. Helen just got her blue belt so the feather weight blue belt division in Texas is larger by one... I usually only see 2-3 gals in that division at local tournaments and it's nice to see another lady join the ranks.

She taught a single leg takedown to halfguard pass to side control to a clock-like choke using the farside lapel under the arm and behind the head. She also taught a scissor leg takedown, as a counter to a single leg, that ends up with a kneebar. It was something like this:

I partnered up with a visiting brownbelt from New York who's in Texas for work, and had a great time. She and I skipped the scissor takedown; it looked a little iffy and I am happy to have a two whole meniscii right now :)

The open mat portion was fantastic. I got to roll with a brand new girl who has all the right basics and big-picture concepts... then Elena, a blue belt from Austin who trains at Paragon.. that was fun too because I'd never met her or seen her before, and we're about the same size, and she has a spunky, sassy personality. I feel like a little kid on the first day of school sometimes, all excited about making new friends. You think you know "everyone" who does jits in your hometown, until you find out you don't-- and it puts a smile on my face to add to my list. 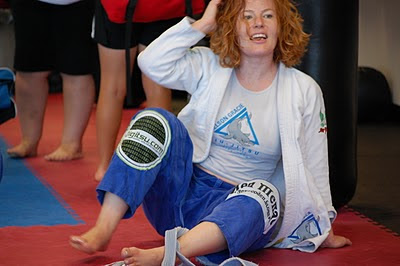 Then I got to roll with Libbie, the NY gal. Whooooo, we had an epic roll. The kind I love because I feel like my body and brain are connected for once... I'm flowing, for once... things are working and clicking and my inside voice isn't getting in the way, for once :) I think we rolled for about 20 minutes! I finally had to just quit to catch my breath (no damn cardio!) 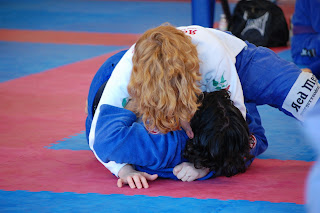 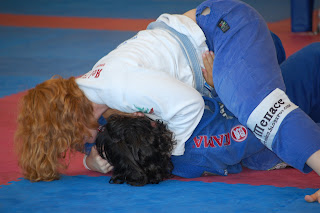 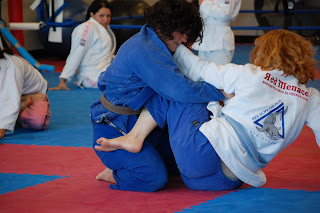 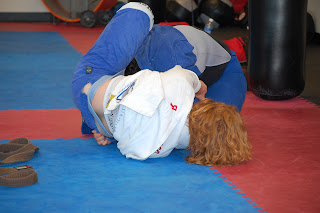 And then I finally had a roll with Lana, another Texas blue belt I know pretty well but have never rolled with. It was all going okay, she has a good guard and I was struggling to pass, until then, I was all tied up and had to stop a sweep by posting on my forehead. It was forceful enough that my sweaty noggin skidded on the mat a bit-- I actually asked her right then if she'd heard the sound effect of my skid-- but I foiled the sweep and got the pass. But then, cue sad music-- while I held side control I felt my nose start to bleed! Boo! Turns out I probably posted on my FACE. SAD FACE. So I cleaned up and by then it was time to head next door for lunch at an Italian place. Yum. I was good, too, I just had a big salad.

And last-- why wasn't Caio Terra competing? is it backlash against his outspoken stance regarding the use of performance enhancing drugs? Read all about it in Matt Little's latest interview on TXMMA.com.

Man, I so wish we had a girls in gis chapter here in Florida! We need to make it happen. Sounds like you guys had a great time!!

Caio competed this past weekend at the American nationals in California. Heck of alot closer than England. He took first.

Not digging that scissor takedown. You can call me a wimp or whatever you like. It is dangerous and there is a reason it is banned in most if not all bjj competition.

Judo banned it in 1998 after a famous Japanese judoka got his leg broken with it, among many many others. Watch these, if you have a strong stomach:

Ryo Chonan practied the kani basami thousands of times and then made Anderson Silva squeal like a pig with a kani basami to heelhook but that was MMA.

It's not so bad with a willing uke who isn't resisting... but the more they resist, the higher the risk of injuring them. Which
means all your training partners will be likely giving you less resistance out of self-interest... which means you probably won't land it in competition. And who wants to do this in a self-defense situation?

And why was a new blue belt teaching something like this, to even newer students? Ugh.

I'm not keen on the scissor takedown either, in the same way I'm not keen on neck cranks, heel hooks and other techniques which are commonly banned from BJJ competition. I wouldn't ever teach them and I'd never use them in training.

However, there is a counter-argument. I made the same comment when I reviewed Tim Cartmell's Passing the Guard, as it included things like the can-opener. His response was basically that he felt it was important to be well-rounded (so not just BJJ legal, but the techniques you might use in SAMBO, no-gi, ADCC etc, or indeed self-defence) and know all grappling techniques, if only so you can defend against them.

Also, the link to the TXMMA article brings up a blank page. I'm not sure if that means the link is incorrect, or if the article has been removed? I'm guessing the latter, as it still comes up on Google Cache.

Anyway he is way small for the lightest division anyway.

Slidey, that's a good point. I suppose you have to know how to do it before you can learn how to defend it. The bummer is, from what I'm hearing, that you get hurt if you don't defend it the right way. So I hope someone teaches how to defend it the right way! And I still am scared of practicing doing it AND defending it :) What is worse-- to be hurt by your teammate, or to hurt your teammate? Yikes :\

Oh and I checked the link-- it's working right now...

Libbie the brown belt! She is so great to roll with, and just cool to boot. Yay for good training partners!

Libbie is SO MUCH FUN! I hope she changes her mind and doesn't go back to NY! I would love to have her around all the time :)