Inspired by a friend's example and my Christmas gift (thanks sis-in-law Ashley!) of Julia Child's MTAOFC, and full of energy I should have expended at lunch open mat (but didn't make it!)... I decided to throw together some chicken tonight. Something simple-- I had chicken thighs, shallots, garlic, thyme, and mushrooms... some dry sherry... sounds great, right?

Just so you occasional commenters know, I can write about the food I make but that doesn't guarantee I always make it well! 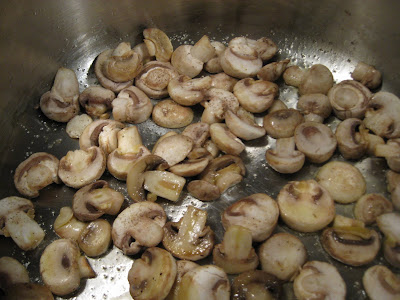 The mushrooms caramelized splendidly so I added the shallots... mmm good. Dredged the brined chicken with flour. Took out the mushrooms etc, put in the chicken. Nice crispy golden, smelling yummy. Flipped those puppies over. 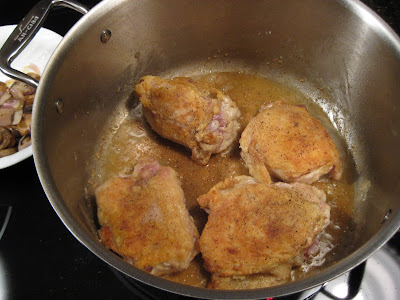 Eventually threw in some garlic, the thyme, and a little piece of bay leaf. Smelling so good I could hardly turn my back on it! And then-- I made my first mistake.

Mom always told me read your recipe twice before you start and check your ingredients. Hmm, no recipe, just playing... but did I check the chicken stock? nooooo... there's usually plenty of frozen homemade stock but after Thanksgiving and the Christmas party and Christmas and so on, had about one cup! Poo! Took the chicken out, deglazed the pan with the stock and threw in about two cups of sherry. Ahhh, back on track.

Put the chicken and other goodies back in the pan. And that, like Lyle Lovett says, was when she made her second mistake. I totally know better, but I dumped all the flour I'd used to dredge the chicken into the pot. If that were a couple tablespoons, I'd have been okay. Nope-- it was more like 3/4 cup. As soon as it hit the pan, I knew I was screwed. It almost instantly congealed into lumpy wallpaper paste, slurped up every available molecule of liquid, and sat up and begged for more.

What's a girl to do-- I gave it more sherry to weaken its will, and then followed up with water (no hangovers please.)

I'm happy to report that though thicker than usual, the sauce has resolved to behave itself... lumps gone, and surprisingly, not pasty-tasting at all. 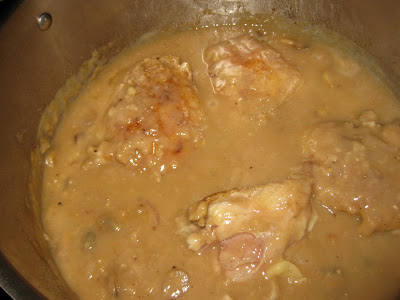