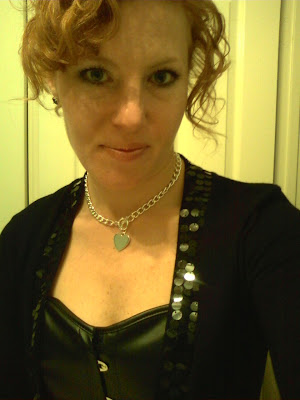 2009 absolutely raced by, and contained some pretty big ups and downs for me... but it got better and better as the year went on, and ended with a splendid bang. I really enjoy cohosting a party, too-- all we had to do was cook (fun) get dressed up (fun) show up and party (fun) and go home. Of course that makes me sound like a crappy cohost, since I didn't stay to clean up-- but really by almost 2am I was almost asleep on my feet. I'm a lightweight and usually asleep by 11, you see. Also, I had done some cleaning up already (though, because the messes I cleaned were caused by ME that probably doesn't count.)

Nonetheless, Joseph and Susan, the couple who hosted, are so sweet and generous that I'm pretty sure they'll forgive me. Who knows, they might even come over for breakfast this morning and pay me back :) 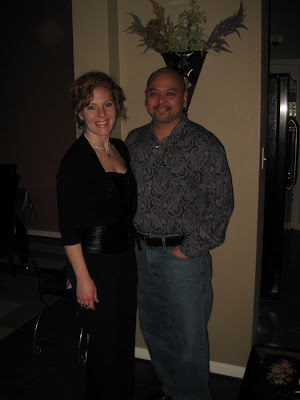 I made champagne punch and some appetizers for the buffet... and bite-size Dutch apple pies. I thought the apple peeler/slicer/corer thingie was so cool I had to take a picture of it. 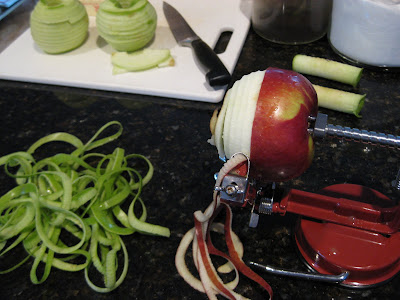 Joseph trains with me at Relson Gracie. He and Susan have a beautiful home. Having a fire in the fireplace was the perfect touch. 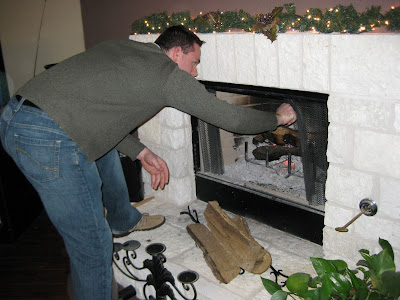 Half the people at the party were jits folk, and I didn't get a chance to speak much with the other half. I made one new friend, a straight male who works as a fashion consultant! (amazing, right?) And of all the people at the party, *he's* the one who almost got to moving the coffeetable and rolling in the living room. However, we managed to restrain ourselves and play nice :) Here's Mitch, Susan, Joseph and Filip... I can't recall the names of the guys in the background. 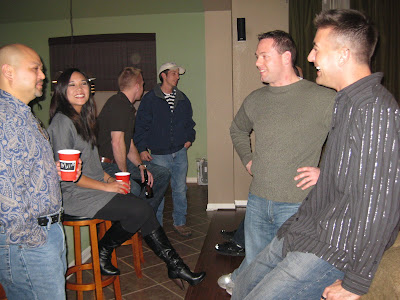 Some of the jits peeps-- Filip, Mark from the Marcelo school in Dallas, Ian, Vidush, Scott, Joseph, me, and Andrew (who runs SwollenEars.com, a pretty cool MMA blog.) My husband trains as well, and later Silas showed up when his restaurant closed down, but they missed the photo op. 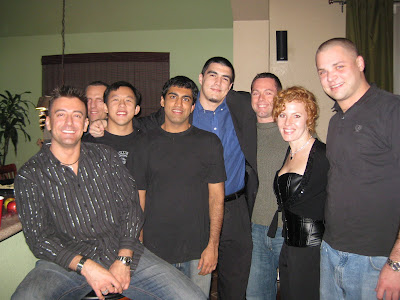 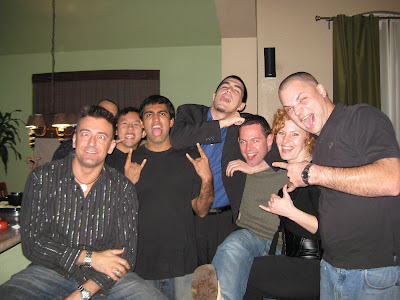 Scott and Becca, who is recovering from ACL surgery.. 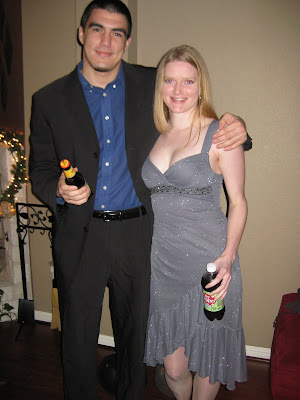 Scott accessorized his sharp suit with some white tennies... 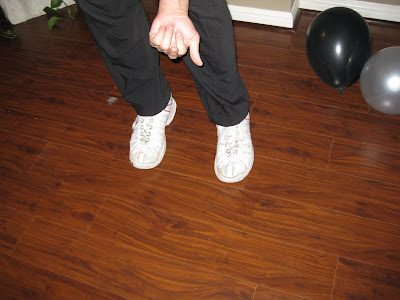 The champagne punch was a little strong. We forgot the champagne at home and we realized our error literally five minutes away from Joseph's place (which is thirty minutes from our house). Fortunately, a handy liquor store solved the problem. First time putting pink champagne in the punch-- no complaints from the peanut gallery. 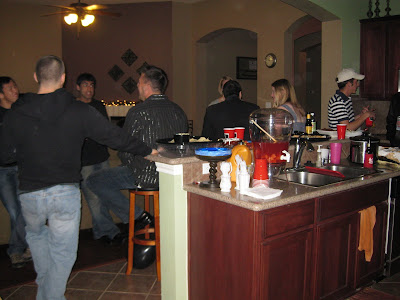 Filip has failed miserably to scare off Melissa even though she's known him for a few months! She fit in well with us, so she's obviously crazy. 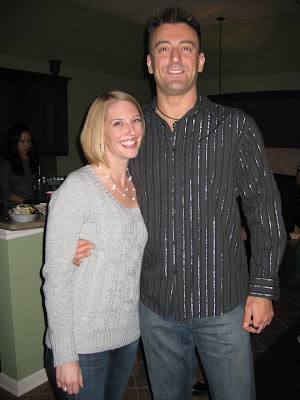 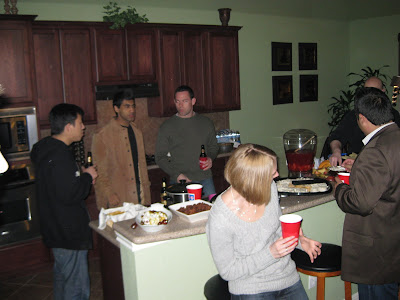 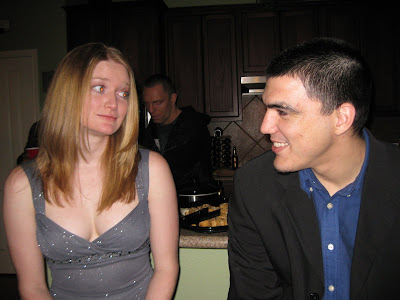 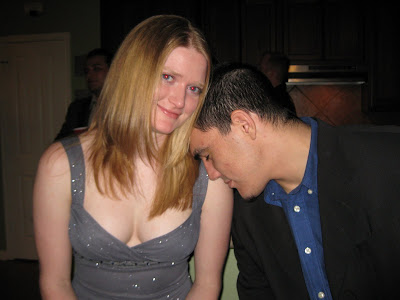 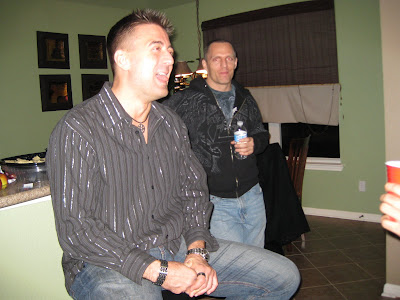 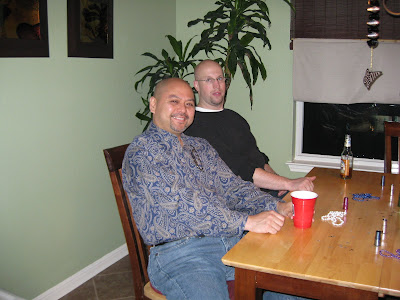 After raucously counting down the last seconds of 2009 and enjoying the party vibe for another hour and a half, Mitch, Mark and I retreated to home base. I was sooooo sleepy, I barely brushed my teeth and took out contacts before hitting the pillow. But here I am bright and bushytailed, awake since seven this morning. So far no one has shown up for breakfast besides Mitch and I think I'll be heading to the academy around noon to get my roll on.

In looking back over this last year, I wish I could point at one area of my game that has improved, or one skill I have seen improvement in over any others. I'm rather frustrated in this regard. I think I'm maybe 1-2% better in general, overall. This is not impressive considering my starting place-- but I don't care. Imma keep on training, because it's fun. Again, I asked Santa for sweeps for Christmas, but it's too early to tell if I got my wish. I honestly think the bottom line for me is that I don't take it seriously enough. I put in tons of hours on the mat, sure, but when I'm not on the mat, I'm not thinking about jits. I am not putting in sufficient mental effort. Other people can remember their rolls, even weeks later. They know in their heads "oh, last time I rolled with this guy, he liked passing this way, so I'm going to check that by changing this detail." Shoot, I can't even remember what I had for dinner last night. I feel like I need more RAM.

So-- this year's resolutions.

1. Regularly read Cane Prevost's blog The Gentle Art with thoughtful attention. He's a BJJ coach under Straight Blast Gym (SBGI) in Oregon. His analytical structure and focus on principles instead of recipes is fabulous and I love his 20 week BJJ curriculum.

2. Collect myself for five minutes before and after every class or open mat. Try to conceptualize one goal for the class ahead of time (hip movement? passing?) and try to summarize and digest some lessons afterwards (Don't let Scott control your head!)

3. Stop the yo-yo weight bullshit. Just because it's pretty easy to take the weight off again is no reason to pitch healthy eating to the curb for a month here and a month there. Ideally would like to lose 10-15lbs (of fat!) which means, specifically, committing to attending crossfit at least 3 times a week; continuing to train daily; eating at least 3 vegetables and 2 fruits a day, and cutting back on the processed carbs, sugars and indulgences with cookie dough. *blush*

4. Roll with Christy once a week where possible. She's a good training partner. I need to follow her through the maze on a regular basis.

Love you guys. Hope your NYE celebrations were fun and SAFE... What are YOUR resolutions?

I feel the same way about the progress -- or lack thereof -- that I've made this year. We've probably both progressed further than we think, but just can't tell it against our normal training partners since they have the pesky habit of progressing as well. At least, that's what I'll keep telling myself ;)

(And while I might remember rolls for a long time after, I also can't remember what I had for dinner!)