It absolutely rocked. I am in the middle of forgetting half of what he covered so this will be short-- sucks not being able to video but I totally understand; the downside is I only take notes later, boo.

We started with an hour of takedowns. Here he's demonstrating some standup with Lee, one of our purples. I took a couple shots during the instruction, but most were blurry since I didn't want to interrupt with a flash. I really liked one of his simple judo foot reaps. (I'm sure I'm using the word incorrectly but whatever.) 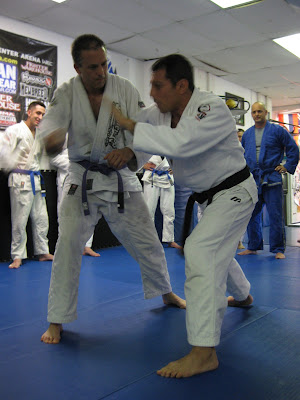 Then we did about 2 hours on the mats- everything from a NS choke and a side escape into a choke to a butterfly pass and some bottom half guard work. I was impressed with his personable, mellow vibe and his willingness to get down on the floor with us, have us do the technique to him and give feedback. We had about 50-60 people on the mat so it was crowded, yet you still felt like he was giving you a mini-private lesson. Somehow he was everywhere, all the time, and so encouraging and constructive. Funny too. And I thought he'd be bigger-- but believe me, when he moves, you know it, and there's no escaping his chokes :)

I'm proud to say I was choked by Royler. My friend Scott can say he swept Royler, which even cooler. Here's Ronny, one of our blackbelts who recently joined us from Brazil, getting RNC'd. 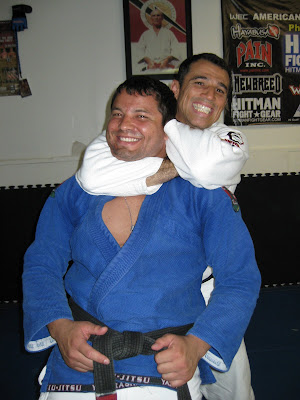 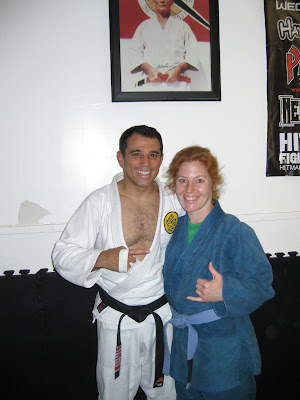 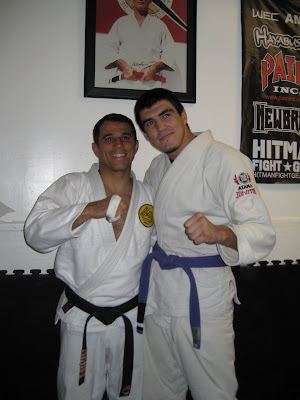 That sounds like a great opportunity and experience. Was there any word on when Royler might be back again?

I think I saw something on the forums mentioning this seminar, but registration was over.

I'd love to make the next one.

No word on when he'll be back, but I am pretty sure there will be repeats. I hope! Donald Park is a longtime student of his and we're so lucky Donald and Phil made this happen. Next time Royler's coming I will post about it on the blog for sure.