Since I wasn't blogging (writing in my diary?) back in February, there's no record of what I went through when the first love of my life, Drew, died. It seems a little strange to discuss what I'm experiencing as I mourn that loss, as though you, Dear Reader, already know all those details. So briefly, Drew and I loved each other passionately and dated for about three years, starting when I was 24. We broke up the summer before I began law school, and I'd say it took me two years to return to anything like normalcy. We began to reestablish a friendship about two years ago, and had exchanged some penetratingly insightful emails with the hopes of truly being good friends again. Then, Sunday, February 13th, our mutual friend Kaan called me (in what, at the time, seemed a prank call) to break the news-- Drew died in a freak motorcycle accident. He raced motorcycles for years and years, and was extremely skillful and successful. It happened in an ordinary practice lap, no adverse weather conditions, no other riders nearby. Fortunately it killed him instantly and he didn't suffer, I am told. 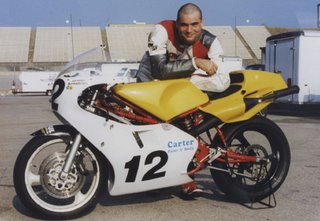 Since then, I have been surprised at the depth of my grief. It's not like we spoke regularly, but he was a monumental part of my past. We were born 3 days apart, and it's astonishing to think that someone as vividly alive as Drew could be dead. It's not like I haven't experienced loss before, but it is especially painful when it is someone so young and full of vitality. Anyway, two nights ago I watched an Anthony Hopkins movie (he's one of my favorite actors!) called "The World's Fastest Indian." It's about an older guy in New Zealand, Burt Munro, back in the 70s, who brought his 1920's Indian Scout motorcycle to the salt flats at Bonneville, Utah to set a new world land speed record (which still stands.) Of course, because Drew and his friend Dr. Jerry Klawitter had planned similar trips, the movie made me think of Drew all evening.

I hope he's breaking the heaven speed record now. I know that sounds cheesy! but it's true.

I know if I dug around I could find those photos of you, Drew, and Forrest with the bike. Though I can't remember where I was, I remember Forrest talking about that day for a long time.
And I remember the day you called to tell me this story. It's still a sad one, huh?
Love you!
Robin