The emotional swings I experience at a tournament (and the immediate before and after) are just amazing.

I have competed virtually all my life, starting with running races in preschool and moving up to spelling bees, science fairs, horseshows, soccer, field hockey, track, debate, racquetball, and mock trial (as well as real trials and oral arguments etc.) I don't get butterflies in my stomach and I love public speaking. I have never been nervous before competition, even when I wasn't certain of winning. Even when I was pretty certain I'd lose, I always felt this kind of freedom... like I had done all the possible work I could do and the outcome was out of my hands.

But jiu jitsu is a first for me. I know on an intellectual level that I have done all the prep possible. I have trained hard, worked on strength and cardio and flexibility, drilled my takedowns, made my elemental movements as instinctive as possible, worked through the basic escapes and counters, and I am very relaxed with having a loose bag of possible attack series instead of a hard-and-fast plan.. but I never, ever feel like it's enough. When I compete in jiu jitsu it is far more personal than any other kind of competition I've ever done. And I can't explain why. It's not a "physical intimate contact" kind of personal that I'm meaning.. and it's not because I care more about being successful in jits. I really, really cared about debate. It was pretty much my life in high school and half of college. But I guess I also felt insouciant about it- maybe cocky is a better word. I was just pretty sure that I was a great speaker and even if my files weren't always the deepest, I could massage something into being.

I guess I just feel much more vulnerable when it's my jits on the line and people are watching. I have so much faith in my academy. Phil and Donald and Christy and the two Richards have been the Northern Stars in my jits firmament.. but not just those folks. The other browns and purples and blues are always describing and leading and illustrating such a profoundly varied and talented view of things... and by and large, the whitebelts are my most valued training partners. Visiting people like Mark Rios and Hillary Williams too.. everyone sprinkles their little flavoring on the dish. But when it comes time to serve it, the proof is in the pudding, and if I can't execute, I know that if I didn't make it happen, it's all me. When I step out onto the mat, it's me that wins or loses. And that usually makes me really unhappy.

[Why this would be so in jits and not so in all those other realms I don't know. Technically it's always true-- your teachers can only do so much. I don't blame them for my mistakes. I really don't get why I feel sooo "on the line" in jits.]

So the majority of today was fine-- my super patient wonderful husband was a champ. He got me to the tournament on time, 9am, for the scorers' meeting at 9:15am. I scored matches from about 10am till 1:15, when I was relieved to go get ready for my division at 1:40. Keep in mind I hadn't eaten anything but a bite of banana and a sip of water, because I was that concerned about making weight. Good thing, too, because I weighed on one scale exactly on weight; about 30 min later, different scale, .5 lbs under weight... then the "official" weigh in, again, exactly on. Yikes. Stupid on my part but more on that later.

Scoring was great because it kept my mind off things. I was also really happy to have developed a friendship with 2 of the 3 other girls in my division through Girls in Gis. Leslie and I met at my second tournament ever (I'd only been training about 2 months!) and we'd bonded about being the "old ladies" of the group. Tara and I just met at the Hillary seminar, but we three felt like old pals. I enjoyed watching the variations in style of different refs and players, too. So I was entertained.

I was irritated when I was called off the table to get ready. There was no warmup area, just the "waiting pool" for the players. I knew I was fighting Leslie first and Tara was matched with the chick from Guam, Tracey. While we waited after weighing in, though, Tara told us Tracey didn't show up! So she had a bye. Once they measured my gi fit, my nerves started to diminish, and a migraine headache strangely took their place. These migraines happen regularly (used to call them trial headaches, but they're hormonal actually) and I was prepared with imitrex... except the imitrex was in my bag, across the gymnasium, up in the bleachers, and where I was not permitted to go (until my weight class was finished.) So I just had to chill and work with it. At least it wasn't one of those where you can't see out of one eye and throw up.

When we actually got on the mat, my nerves disappeared. All I saw was Leslie. I don't recall if it was with her or Tara, but at some point someone tried to do the same "foot on hip" arm bar in slow motion thing that busted my bubble at NAGA, but I stuffed it and tried to get the takedown, but missed the foot. In any case, I was in her guard and tight, head well controlled, and maybe even in a rubberguardy thing for a while. My head was jammed between her legs and I couldn't hear a thing, but I was protecting my arms well and her attempt at a cross collar choke had nothing going on. This is one of those matches where, because my eyes were closed, my sense of spatial relationships got mangled, so I can't wait to see the video-- all I recall is accidentally trailing a finger across her eye while trying to pass guard/stack her... then I passed to side I think, got some kind of a collar grip with my arm around her head, and I went to NS and got something like a one handed clock choke. Tap kinda startled me, I didn't think I had it deep enough.

They offered me rest time, but I was fine, so I just ran and grabbed Tara for round 2. Same sort of start-- slightly more challenging grip battle this time, I started to go for a Russian but on my retarded side and I didn't fully commit, so I do recall Phil saying I could have gotten that. She pulled guard, more like sat to guard, and I came down with her with my knee up (couldn't have been comfortable for her!) I passed, got side, fought a second for knee on belly, and went to mount. Attacked her left arm for a pillow, then switched to the right arm, then back to the left arm for a reverse straight armbar from seated mount.. when she defended, I came down with it and locked up the americana. 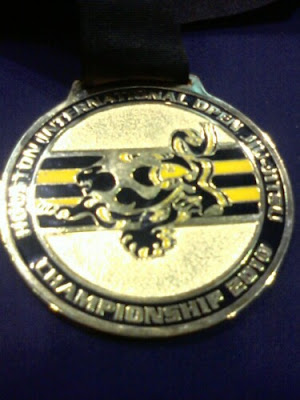 You'd think, logically, that this would set me up splendidly for the absolute. Brackets were already out, Tracey didn't show, and I knew I was matched with Leslie again... so with only 8 ladies in the division, if you win your first match you're in the medals. I should have found some comfort in this, but I failed. Epically. I scored more rounds, took more imitrex, and yet the migraine grew and grew until I had to admit I thought I'd die if I competed in the absolute. I don't think Leslie fought either, to be honest.. I saw Triin's match in division against Laura Hallock (same boring game I always see with women- pull guard, triangle/triangle armbar) and then Tara with Laura (same I think; Laura won) and Triin with a blonde chick (same game, different characters; blonde won) and then I saw Lana get matched with Laura (I think Laura won) and I could not have enjoyed their matches if I'd been waiting for my own. My headache didn't improve with the news that I wasn't competing any more, but everything else improved for sure. Lame. How the hell can I be a world class bb if I can't compete happily?

Anyway, I'm so sleepy I can't keep my eyes open any more. Off to bed. Videos to come... and thank all of you, for contributing to my entry fee plea via paypal.. for the friendly comments and texts and words of advice and encouragement. I couldn't do it without you...

I know I said I wanted to address two things more fully: husband and what I learned. It will have to wait for tomorrow!

On a side note tho, In BJJ, please don't try to "massage something into being." It can easily get misunderstood :)

You did a great job today. I went against a monster in the first round and lost a 4 minute match. He about broke my jaw with 3-4 different/failed cross face chokes.

I got a belt test next Saturday for either my fourth rank on white belt or my blue belt. Depending on what happens, I'll be signing up for the Rupture tourney in April. If I manage to get my blue, I'll be focusing on dropping 20 pounds and working on technique.

Now that I know who you are, I'll come say hi at the next tournament.

Congrats, Georgette!! I can't wait to see the videos. Sounds like you did awesome!

Honestly, I feel the same way about tournaments. They stress me out. Many of my teammates really enjoy them; the rush of going up against someone you don't know and the excitement of the atmosphere. But for me, it's all a bunch of pressure. I think it's good to go and challenge yourself, to see where your game is at and what you will do when you're under pressure. But I have never enjoyed a tournament until after it's over!! :)

Good luck Conor, not that you need it! And dammit you should have said hi THIS time! :)

Update: turns out the "blonde chick" is Rita... part of the Girls in Gis crowd.. and she told me the next day that watching my match against Laura in 2008 at the Atama Open was why Rita decided to get into jiu jitsu! How freaking cool is that!?!