Fire in the belly, lead in the chest.

So, we had a local jits tournament last Saturday and our school cleaned up! :) Yay us. Lots of my friends competed and everyone did well. One friend already had an injured finger and now it's broken in some weird twisty way that makes it look like a piece of celery sliced and ice-watered as garnish. Blech. Yay vicodin for him. I maybe mighta shoulda competed too, but I felt like my chest was still congested and wasn't really able to catch my breath, so I just videotaped. Which means now I have a pile of raw footage that needs uploading, conversion, and more uploading. But I'm totally happy to do it.

Anyway... watching somehow, don't ask me, put the fire in my belly again. So despite all the contraindications, I'm looking very seriously at competing at NAGA on the 20th. At least in gi.

The contraindications: for one thing, I can't catch my breath. I could blame this on my spotty crappy training schedule for the last month, or I could blame it on the chest congestion most doctors would call fluid in the lungs. (M'kay, I'm no medical professional, and the wiki on rales tells me I'm probably a bit over the top with that, but whatever.) By spotty training I mean I haven't done my noon crossfit class in a month. I have at best trained once a day 6 days a week. Last week, I did not train at allllll Wednesday, Thursday, Friday, Saturday. So I'm back in the saddle training at least 2x a day, not missing any crossfit classes, getting on the mats at all opportunities. Except I skipped tonight's class since I did morning and lunch. And wheezed like an old accordion. *sigh* I did my best to be aggressive and not just ball up. I liked the series we worked this morning, and Richard showed me a little tweak to make the armbar come on that much faster :) My only gripe is it doesn't work (for me) in nogi. I really need some nogi help. LOL, I need help in so many directions. The thing I do best is pass guard, or ball up and hedgehog. I need to be a wildcat! not a hedgehog. 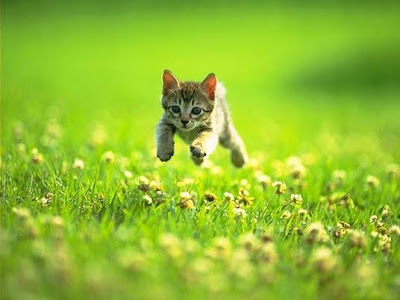 Other contraindications include my well-padded derriere that actually might not make weight, poverty (but that could be amended by my super sponsor up in Wisconsin, Badgerland Jiu Jitsu) and fear. But funny enough, the lead in my chest and my excessive derrierage seem to moderate in favor of competing. I dunno, I guess they make me feel like I did when I was a whitebelt again.. look, I don't expect success, I'm just going to go outgrrrrr those chicas.

So I pitched my sponsor for entry fees... might get my gi pants tiedyed by Happy Kimonos in time... and I'm already signed up for the Hillary Williams seminar the next day, so I know I'm going up there. Just drop about 10 lbs and I'll be happy.

Hence my unmotivating supper... spinach salad (an entire box of spinach and baby red lettuce) with a little feta and some no-sugar vinaigrette.

LOL at the kitten and hedgehog photos!
good luck in the tournament.

Hahaha! Your pictures made me laugh. I know what you mean about catching the competition fever. Several of my friends are competing this weekend and NAGA and also again in two weeks and Florida State. I opted to wait until June for several reasons, but now I am feeling the itch. Too late for me this time! No tengo dineros. lol. If you're still not feeling well with your breathing, maybe it will be good for your body to catch a break. But, as one fellow member of the BJJ Addcits Anonymous to another, I think we both know that how un-fun that would be!

By the way, how do youmanage the energy for multiple classes a day? My only day of multiple classes is Tuesday. They each about 2 and half hours long and by the end of the day I am wiped out. Lack of endurance on my end?

Lynntropy said...
This comment has been removed by the author.
11:10 AM

So funny that you would pick that particular picture as it was the seed for another fave pic of mine:
(linked it)

pic:Everytime you miss a CrossFit workout, God kills a kitten...