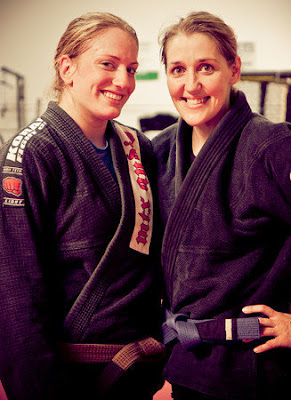 Many many thanks to Triin Seppel and Fenom Kimonos for organizing a great opportunity for women to train with Hillary Williams.. and thanks to Alvarez BJJ for providing the space! 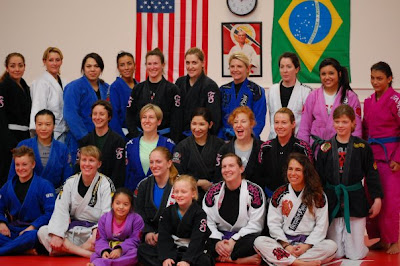 There's something special and unique about being able to train solely with other women and if you haven't experienced it (and you're female) you need to make every effort to do that. Several times during my tournament matches, I was astonished at how much easier it was to move womens' bodies around in space. (This is not to say it was easy to pass their guards, or that they weren't strong as heck!) But compared to men, the lesser mass and the different distribution of weight really does make a difference. Too, there's the emotional side of things.. to be surrounded by women of varying ages (from itty-bitty girls to teens to ladies my age and older) all pursuing a common (for us) yet uncommon (for the world) goal was... affirming? reassuring? uplifting and invigorating. 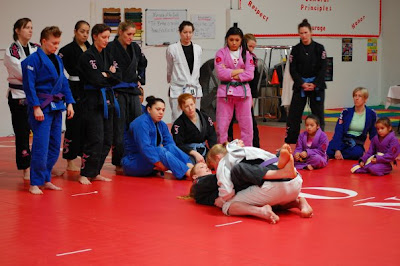 Because she has plenty of experience teaching jits, you'd never have known this was her first official seminar. Hope we get her back for many more. She's patient, careful, and doesn't scrimp on detail. People learn in different ways; some are visual, some are aural, some are kinesthetic. The longer I train jits the more kinesthetic I find myself, but I still depend heavily on hearing a verbal description of the movements. Nothing frustrates me quicker than hearing a litany of "put this here, then move here, and you'll do like this." Especially when people mix up body parts. I can't always remember what I saw, but I can recall the description later if I get stuck, and if the description is "here there and like this" I am screwed. However, to Hillary's credit, her explanations were very clear and thorough. And she agreeably let me feel it when I wanted to. Foolish me. 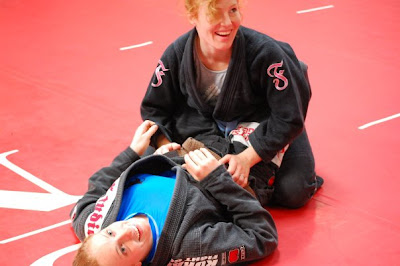 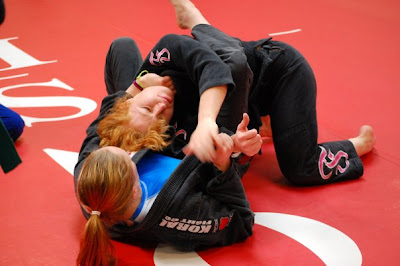 DOUBLE DOUBLE plus good on her for emailing us all a list of the techniques and some details to remind us of what she taught. Damn, this girl is good. Not only a full time premed student and world-class competitor and ref, she also found time between a six-hour drive home, her own training, and a midnight homework deadline to email us our technique cheatsheet within 12 hours of the seminar. And she's CHEAP! (Hop on this bandwagon while she still is. In the not-too-distant future, she will be even busier and more aware of her own worth, so book her now. And no, I don't get a cut. Just IMHO.)

As far as the techniques went, I'd say she did a nice blend of basics, well-suited to the audience (about half and half whitebelts and blues, with a handful of purples.) 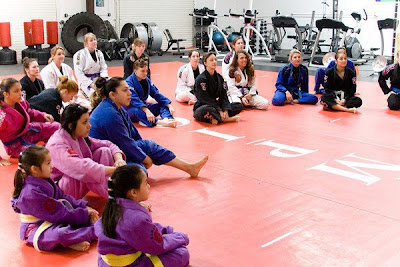 Along with two new-to-me chokes, she taught a series from guard with options to the back, a triangle, and an armbar. The lapel-under-the-arm-over-the-back was new for me and as she pointed out, useful to attack from the guard when people lock out their arms on your hips. 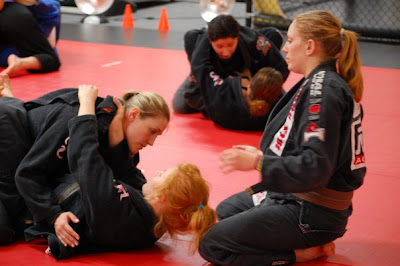 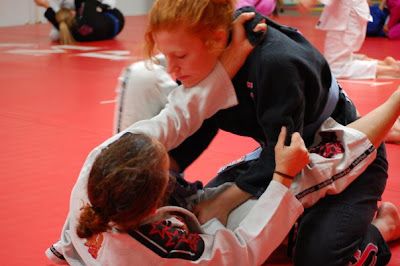 Her moves were chained well, flowing from attack to counter to recounter. She explained the biomechanics and threw in several mini-techniques like grip breaks too. I'd say the only thing I'd change would be a tiny bit less drilling time-- however, I think my answer is colored by the fact that many of her setups were things I've seen before, whereas that might not be true for everyone. Plus I realize the drilling time was influenced by her methodical walk around the room, observing, tweaking, explaining and helping. The seminar size was just right, by the way-- somewhere in the high twenties, I think. Plenty of room, and we were encouraged to change drilling partners after every sequence, which was nice.

Of course I was rocking my Fenom gi and Dev's patch, because we all know I AM "fueled by fear." (Get your own here.) After two-ish hours of technique, Hillary got a few rolls in before hitting the road. On her way home to Arkansas, Hillary trained with Braulio Estima, who was teaching a seminar on the other side of town... though apparently the night before, someone made the mistake of trying to fight him (and shot at him!) You can read all about that here.

By the way, the lovely photos above were taken by my husband Mitch, by jitsuka Meshel, and by Jen from RARMAI Creative Services.

Great report, great photos and by the sounds of it, a great seminar. And a list of techniques covered sent by email...that is quality and service with a smile!

Hillary is most welcome to come visit the UK pleeeeese!

We use that lapel grip (Brabo grip) a lot at all the Team LI schools. Mike Fowler and a few other people had a lot of success with it in tourneys.

What is that neck crank/armbar thing she is doing to you? I don't think I've ever seen that before.

Sounds like Hillary is a real class act and did an awesome job.

@BraulioEstima is tweeting the shooting story was a fabrication and it seems they've removed if from sherdog.

That neck crank-armbar thing was actually a very technical, lovely gi choke without any arm involvement (though I think you could get some arm tweak going if you wanted. It's a familiar position for it, isn't it? Kind of like a pendulum sweep..)