Scott Reed took bronze in nogi and silver in gi... he's a big tough bluebelt with a great guard..

Kambiz, one of our whitebelts, took gold nogi, I think, and silver in gi, getting a killer feet-in-the-air judo throw on his amazed opponent in finals and earning appreciative compliments from refs and crowd alike.

Our brown belt instructor in San Antonio, Josh, brought a passel of kids and every one of them medaled in their divisions.

Jonathan, another whitebelt, took home the gold in his gi division at his first tournament...

And me? Videos are up on facebook, but the short version... 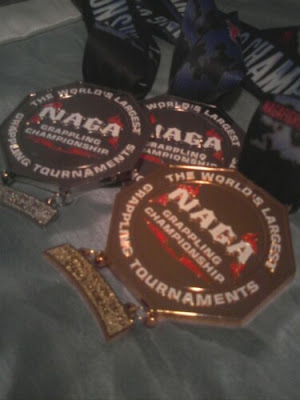 Bottom line-- gold in intermediate nogi (I had one opponent, won on points.) Silver in expert nogi (they didn't have enough girls signed up so I was offered the chance to jump up a level, and I got to fight Kelmy the Killer who wiped the mats with me last year at NAGA... I did better this time, but she got me with an americana in the end..)

And then my gi division was weird-- there was only one other gal blue belt. I had the option of going up to expert, fighting Kelmy and some other advanced chicks, one of whom weighed 190something... or being in the combined teens-and-adult intermediate/blue belt group. I opted for the latter (frankly, Kelmy's americana tweaked my shoulder and for about 40 min I was not even sure I'd fight again.) In my gi division, there were several teens that I felt somewhat guilty for mauling, not that it stopped me ("Ow, you're on my lips" So move your lips out of the way of my choke!)... and then there was finals. Finals was the hitch in my day.

Finals with Kristie, I think, an adult blue belt. And takedowns started so mellow. I was positively stalking her, like the proverbial ocelot. And then she pulled guard into a Shama special armbar, which she didn't have.. my elbow was past her crotch and I was fine working for the pass. In fact, a standing guard pass had worked so well previously that I stood up. Amazingly, she came up with me (whoa! girls are little!) But apparently in the standing up process I slipped deeper into the armbar, and as I realized it, I set her back down, she went belly down or I tipped over or something like that, and I felt the armbar hit, so I said "Tap!" Then I discovered that she was wearing a cup. I swear she was wearing a cup or perhaps she had a really prominent pubic bone, but my verbal tap was inadequate, as she immediately powered into the armbar, popping the crap out of my elbow and causing me to rawr "TAAAAAAP!" like... like... an ocelot.

She later told me all the girls she trains with are triple jointed and she didn't think I really was tapping.

Anyway she's really nice so I'm sure it was an accident. And she said she wasn't wearing a cup either.

Josh was elemental in my success, with great cornering and confidence-building. Mitch did a great job driving me around, putting up with my grumping and stressing, and filming matches patiently. And I feel like I'm back in the saddle again!

Wow, sounds like there was a lot of ups and downs. Congrats on your wins.

AWESOME!!!!!!! You rock, chica. And you said you weren't going to do it... Here's what I say to that: pppbbpbpbpbpbpbpbpbbpbpb.

I'd have been so scared to move up a division!

And Triple jointed?! "Oh I'm sorry, I normally work with contortionists... I didn't realize you have normal joints..."

'Didn't think you were tapping'? Geez, at least ask, "Did you just tap?" (which isn't nearly as funny as "Did you just bite me?", but still). Saying "Tap" is definitely tapping; non-committal pokes or unexplained slaps can be interpreted differently. And where was the ref? *pokes Hillary*

nice job. sounds like you had a pretty good time....other than the last girl.

I hope i do as well on march 6th. Its my first tournament ever.

Hi I just started jiu jitsu about 1 month ago. I am 42 and about 100 pounds overweight and I find your blog very inspiring. I am a stay at home mom. I love jiu jitsu but its very difficult for me because of my size. Hope one day I can compete. Keep blogging!!!

AJBJJ-- there's lots of good advice out there on prepping for your first tournament. Just a few:

Anonymous: Keep it up lady! That's awesome that you've discovered something as multifaceted as jits. It has brought many blessings into my life and I look forward to hearing more about your journey. Please don't hesitate to start your OWN blog because it might be inspirational to others, to me, and to yourself! I'd love to be a fly on your wall and hear about the experience. Please share! :)

Haha you come across as quite hard to please :)

I say that because your account of what you did and what went on at the comp describes a very successful campaign. VERY! You should be over the moon :)

I can't wait to see the vids. On paper (well, you know what I mean) it sounds like your stand up strategy was on the dot! Let me know when they are ready.

ps. I've met many nice people in my life. None have ever favoured the risk of overextending my joints over the simple question "Did you tap there?". I agree with Leslie there.

Georgette said...
This comment has been removed by the author.
7:14 AM

That was Kristine!! She got promoted to purple yesterday. You did great, Georgette.

Just so ya'll know, I don't self-edit my remarks in these blog postings. Whatever I am feeling or thinking in the moment is what comes out.

Now, I hope I didn't offend or slander my opponent from gi finals (Kristine) because as I said, she was really nice, and I definitely did not get a "douchebag" vibe from her. If I thought she genuinely popped my arm out of dickishness I would have said so. She didn't-- it was just one of those tournament things that happens. And it makes it a little easier to take to know she got promoted to purple shortly thereafter! Woooo! Congrats Kristine!

And my elbow is much, much better. I iced it a bunch in the first 24 hours, been taking ibuprofen and aleve depending on what's at hand, and I spent a good stretch in the infrared sauna. That plus getting back on the mats and back to crossfit and I'm really pretty much good to go.

In other words, I'm ready for the Texas International Open IBJJF tournament in two weeks. Yay!

(I don't self-edit, either, except for grammar and spelling ;).

It didn't sound from your description like you thought she purposely disregarded your tap for a chance to crank your arm, but a verbal tap is really a tap. No point in "fake" verbal tapping because the ref can hear it, and then it's game over. It's not like you said, "Stop!", "Ouch!", or some vague and non-committal interjection (which all lead me to ask, "Is that a tap?").

And while I'm all for waiting for the ref to acknowledge a tap before giving up the position (since some people are poor sports and just trying to trick you), you can ask if it was really a tap without either losing the position or increasing the submission. I know, probably just one of those adrenaline-induced brain-disconnect moments.

Had a submission held on me after I tapped because the ref hadn't stepped in. Now I make sure to tap "big" -- either exaggerated hand motions or a loud "Tap!" -- which makes the ref jump in there faster and gets her to let up sooner (since half the gym just saw/heard me tap).

I'm not defending your girl, but I do want to throw a thought out there. In a fight - real, professional, amateur, whatever - the tap signifies your submission to your opponent's action. In professional terms, if the ref doesn't stop it, it's not "official." If your opponent taps and you let up but the ref didn't see it, the match continues (even at the amateur level). Sure, if it was me or you, we'd respect the fact that we tapped and just tell the ref "hey, I tapped." But not everyone is nice, and honestly, I've saw just a couple months ago where a guy let up after his opponent tapped, but since the ref didn't see it the other guy started fighting again. Bullshit? Yep, but not officially.

NOW, the other side. In my mind, we are not doing this professionally, we are doing this for experience and education and for fun most of all. When I go for a submission (the few I have) even in competition I take it easy for the finish, because the worst thing I can imagine is fucking someone up unintentionally - that's their life and their livelihood I'm messing with... over a jiu jitsu sport match? I don't think so.

There is a happy medium, and if you want to see it, check out my coach's match at the US Open (Daniel Thomas, montereyjiujitsu.com) - he had an arm bar and held it - DIDN'T crank it, just held it as his opponent tapped - until the ref stepped in. He didn't injure the guy, but he made sure the ref saw it and acknowledged it.

Not everyone can do this, which is why white belts are scary sometimes (and blues too, I suppose). But it's what we should aim for - and expect - in a competition match. Like I said, I'm not defending your opponent, but it could be she'd been on the other end of something like that, which can impact the way you finish a submission.

I think Leslie's exactly right - to keep it from happening, just tap loud and obvious (says the guy that keeps getting his shoulder jacked up from not doing that).

Just food for thought. I still think you rule, Georgette! :)

All outstanding points. (And thanks for the kind words everyone! :) )

I wasn't as loud as I could have been the first time. Next time, I will holler! (Better to scare everyone and be fine, as I have learned.)

The flip side for me on the offense... kinda felt unhappy to keep holding on to an armbar when I both HEARD it pop and FELT it hyperextend and SAW the arm bent unnaturally-- and I called to Hillary, it's popping! it's popping! But my opponent, triple jointed little killer that she was, wouldn't tap. So I gave up on it. Not sure whether next time I'd just hang on without increasing pressure, or put a little more on, or change the angle a smidge (as I did this time, without success) or put on AS MUCH pressure as it takes to get the tap.

It's funny, the phrase I usually have running through my head is "I'll break your effing jaw if that's what it takes to get the choke" but when it comes to arms? Ewww....

LOL, I hollered "TAP!" at the last tournament, and everyone thought I was injured. No, I just needed her to stop choking me now and not wait for the ref -- I was gonna go out!! :P